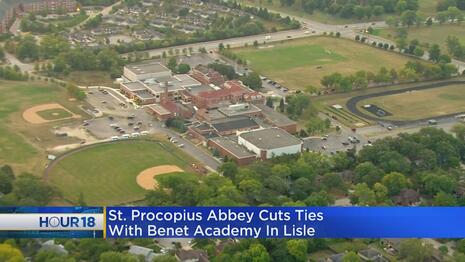 According to NBC Out, the network’s repository for all things alphabet soupy, the Chicago area Catholic high school has hired a lesbian lacrosse coach (Yay!) and the Benedictine monks of St. Procopius Abbey (Hiiss! Boo!), who built the school, funded it and acted as its board for 120 years, aren’t happy about it.

In fact, they’re pulling their sponsorship and will cease governing the school. Abbot Austin G. Murphy, head of St. Procopius Abbey and chancellor of Benet, announced the move in a letter, talking about the Abbey no longer having the “resources needed for governance and oversight of the Academy.”

But Murphy had made his concerns known back in September when the school announced it was hiring Amanda Kammes, who is married to another woman:

“The matter raises the question of what a Catholic high school should require from those who work with and form its students,” he said at the time. “In particular, is it necessary that the witness of their public lives not be in opposition to Catholic moral teaching? I believe this requirement is necessary and, therefore am deeply troubled by the school’s decision which calls into question its adherence to the doctrines of the Catholic faith.”

“Catholic moral teaching?” “Adherence to the doctrines of the Catholic faith?” The good abbot mustn’t get out much. The President of the United States is an abortion enthusiast and pal to anybody who wants add a letter to the LGBT train, and he’s a “good Catholic.” The pope told him so.

Catholic identity, theology and social teachings equate to precisely bupkus in the age of crowdsourced feelings. See, the administration at first was reluctant to hire the lesbian coach. But then her “supporters held a rally outside the school and more than 3,000 alumni signed a letter in opposition to the board’s decision,” NBC Out says.

Not only that, the school’s board “had an honest and heartfelt discussion on this very complex issue … Going forward we will look for opportunities for dialogue in our community about how we remain true to our Catholic mission while meeting people where they are in their personal journey through life. For now, we hope that this is the first step in healing the Benet community."

So these unshakable defenders of the faith surrendered to a bunch of high school girls in rainbow covid masks and the icky thought of running afoul of the media that hates them to begin with. For her part, Kammes offered the happy talk the left uses when it gets what it wants: ​​

“The past week provided a chance for Benet to rally together in the name of community, sportsmanship, and social change, and I’m beyond grateful that Benet reconsidered their decision,” she said in September.

“Social change.” She’s supposed to be an educator and lacrosse coach. But who’ll say no to her? She’s an activist, happy to hollow out an institution for her own gratification:

Throughout the past few days, my hope is that the LGBTQ+ community at Benet and other Catholic institutions, felt supported, loved, and know that they are not alone. You are part of a community — as students, athletes, and friends — and I am your ally and will continue to be one.

Inspirational stuff, I’m sure. And NBC Out gave the last word another activist from the LGBT Industrial Complex:

“I think that there is a growing recognition among some of the faith-based institutions that they are increasingly out of step with the young people that they are inviting to be students and to get their education,” Jenny Pizer, law and policy director for Lambda Legal, an LGBTQ civil rights organization, previously told NBC News, after Benet Academy reversed its decision regarding Kammes. “It’s lovely that in this situation the school decided to value the needs of the students.”

Heaven forbid an institution of the Holy Catholic Church be out of step with what Pizer and Kammes and NBC Out. Benet Academy is putting a happy face on it:

Stephen Marth, Benet Academy head of school, said, according to the statement, that “contrary to some reports circulating in the media” on Tuesday, “know of our steadfast commitment to ensuring that the Academy will maintain its Catholic identity, in the Benedictine tradition, for years to come.”

At least until the 14-year-olds demand Benet hires a transgender football coach.