Female athletes are strong and disciplined. Unless they’re not. They’re tough, fierce competitors, until a paternalistic government can’t guarantee them impunity. According to USA Today sports columnist Nancy Armour, a Supreme Court decision is all that keeps the warrior queens of big-time sports from puttering away their lives in the kitchen, barefoot and pregnant. 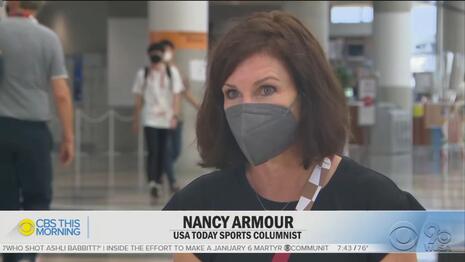 On Sept. 20 more than 500 female athletes filed an amicus brief with SCOTUS against a Mississippi law that makes abortion after 15 weeks illegal. The case is supposedly a direct challenge to the Roe v. Wade regime that countenances abortion until tee ball.

Armour, of course, warns that the case “is about more than abortion rights. Women’s opportunities to play sports, and the gains in equality that have resulted, are also at stake.”

So the argument is the same as it's been: that without abortion, women won’t get to do fun things: “Nearly 50 years later, it is impossible to separate the rights protected by Roe from the opportunities afforded by Title IX …the law implemented the previous summer requiring gender equity in athletics and education.”

Impossible? Maybe you just haven’t tried, Nancy. Ever heard of contraceptives? There’s also the “not having sex” thing that’s supposedly pretty reliable. Sure, they require something of women, but we’re talking about elite athletes who could surely add sexual responsibility to their training regimen.

If the murder of innocents weren’t involved, it would be funny to reflect on how the “hear me roar” amazons of the 70s built their house out of paper pushed and signed by men.

But anyway, don’t take Nancy’s word for it. Take the word of … a lesbian:

“As women athletes and people in sports, we must have the power to make important decisions about our own bodies and exert control over our reproductive lives,” said Megan Rapinoe, a two-time World Cup champion and Olympic gold and bronze medalist.

Rapinoe is no doubt sincere -- she’s never met a lefty hobby horse she couldn’t sincerely  bludgeon past it’s mortality. That’s kind of the problem. Marching out another squad of celebrity activists to declare armageddon means competing with other armageddons sometimes proclaimed by the self same celebrity activists.

“If Roe is weakened or overturned … that’s a dire situation for all women,” said Joanna Wright, the attorney who filed the brief. “With respect to the brave amici, they are attesting to the equally grave impact that would have on women’s sports and young women’s ability to compete at top of their game.”

“Brave” just doesn’t mean what it used to. Nor does “grave.”

Luckily, Armour makes things plain when she quotes “one unnamed soccer player” from the brief:

All the decisions I have made, the sacrifices I have made, and the time I have spent mastering my craft have been in the pursuit of excellence. I have honed my body and my mind through my efforts.

To have any of that autonomy taken away, to have someone else make decisions for my body and my career, is to take away my life’s pursuit.

That’s pretty clear. Take away her life’s pursuit or take away a life. The cult of self dictates the obvious choice.

Armour is a deacon in that religion, and well versed in its consolations. “Access to abortion” is a metaphysical security blanket. “Whether we find ourselves in need of the procedure or not,” she writes, “we have known it is there, and that knowledge has given us the security to live boldly in a way that women 50 years ago could not.”

Forget about the millions of women who never got to live, boldly or otherwise, thanks to Armour’s magic woobie.