The Chicago Bears beat Dallas 31-24 last week. While there are plenty of Americans who’ll swear that the Cowboys are Satan’s team, few outside the “Super Fans” (Da Berss!) would have characterized Chicago as God’s team. And yet … 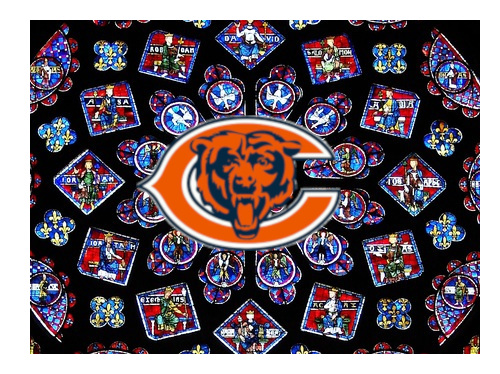 Not much good news has come from the NFL over the last few seasons, so a team dedicating resources to The Good News is a story.  According to Dan Pompei, writing for The Athletic (pay walled), on Nov. 26 the Bears dedicated a new chapel in Halas Hall, the team’s HQ. The Bears’ chapel, says Pompei, is “believed to be the only one in an NFL facility.”

When the Bears began envisioning a new Halas Hall, team chairman George McCaskey asked his mother Virginia McCaskey if she would like for it to include a place of worship. The first lady of the NFL, a devout Catholic, jumped at the opportunity.

Apparently, “devout” doesn’t begin to cover it. McCaskey attends Mass at 6:15 every morning. She “has shared her faith in many ways, including giving away thousands of outdoor nativity scenes and rosaries,” Pompei writes. Son George told him “No one knows how generous she’s been to churches and other faiths … choir robes, or the altar, or the baptismal font, or the crucifix for this church or that church, only she knows the extent of it.”

The chapel is an extension of her faith. “God has been very good to our family,” Ms McCaskey said. “It seems a way to say thank you. I’m hoping that other people feel the same way — to God, not to me.” That's pretty refreshing.

The space that “used to be the offensive line meeting room” now has traditional stained glass windows (“but with a Bears tint”), a crucifix and bronze relief of the Holy Family that can be hidden for those who object to that. It houses a torah and the essentials of other faiths. “This is a worship space, George told Pompei. “It’s much like a non-denominational chapel you might see in a hospital. It has chairs instead of pews, so they can be rearranged if somebody wanted to have a bible study or group discussion, or two people just want to have a conversation about life.”

The Bears franchise exists to win NFL championships, of course, and many would argue that Christian humility is of limited use in that pursuit. Ask Dave Wannstedt, who took over as Bears head coach in 1993 after the firing of a certain Coach Ditka. Wannstedt began attending daily mass when he arrived in Chicago. He left six seasons later with a 41–57 record.

On the other hand, the Bears opened 2019 at 3-5. “Since the chapel opened in mid-November, the Bears have won three of four games,” and, as Pompei writes, “They have a prayer.”