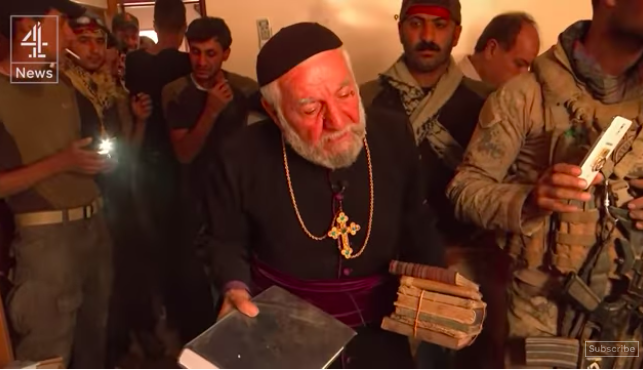 God bless The Atlantic. If that sentence is strange to read, it is stranger to write about a magazine that is, after all, a flagship organ of secular liberalism. (Seriously, there’s a piece currently on The Atlantic site that begins with the words: “Barack Obama is literally more popular than Jesus among Democrats.”)

But an article by staff writer Emma Green titled, “The Impossible Future of Christians in the Middle East,” published May 23, is something of a small miracle. Where most liberal outlets are reluctant to mention, let alone explore, the plight of Christians in Muslim-majority nations, Green lays out what’s at stake: “The precarious state of Christianity in Iraq is tragic on its own terms. The world may soon witness the permanent displacement of an ancient religion, and an ancient people.” This is a serious, well-reported article.

(A note at the end reads: “Support for this article has been provided by the Henry R. Luce Initiative on Religion and International Affairs of the Henry Luce Foundation.” Whatever form that support took, more please.)

Green centers her story around the plight of Chaldean Christians in an area overrun by ISIS in 2014, but doesn’t shrink from the larger tragedy that’s reduced Iraq’s Christian population by 80 percent since 2003 and the entire region’s by 40 percent since 1996. It is playing out from Pakistan to Egypt and in frequent anti-Christian atrocities in sub-Saharan Africa.

“[T]the fate of Christianity in places like the Nineveh Plain has a geopolitical significance as well,” Green writes. “Religious minorities test a country’s tolerance for pluralism … Whether Christians can survive, and thrive, in Muslim-majority countries is a crucial indicator of whether democracy, too, is viable in those places.”

And though she doesn’t go so far as to label the exodus of Christians from the region a “cleansing” or “genocide,” as the Obama administration reluctantly did, Green’s description of persecution leave little doubt about the reason for it. She relates the experience of Christian priest returning to his hometown after the overthrow of ISIS:

The devastation that awaited was breathtaking. The hands of one life-size statue of Mary, robed in bright blue, had been chopped off at the wrists. The bell of St. Adday … now sat lopsided in its tower. The church itself had been partially burned black; Thabet believes that fighters may have set off explosives a few days before they made their retreat. Decapitated statues of Mary and Jesus surrounded the altar, along with the remnants of angels that had been shot off the walls. Thabet found a torn piece of his ordination vestments in the rubble — the only object he has to remind him of the day he vowed to serve his community.

Just as disturbing, Christian Birnadet Hanna returned to work in the same town and “colleagues told her that she should leave: Christians do not belong in Muslim Iraq, they said. She now believes that some of her Muslim neighbors may have been sympathetic to ISIS’s worldview. The rise of the caliphate—and the sinking fortunes of Iraq’s Christians—empowered them to be more open about their bigotry.”

The article is long. It’s also necessary. Green details the Trump administration’s efforts to help rebuild devastated Christian areas. (The Knights of Columbus get a rare positive, or at least neutral mention for the aid they’ve provided.) She explains the pressure from the Nineveh Plain’s Christians face from Shiites in the Iraqi government and nearby Iran, and the tensions with other minority groups.

Green and The Atlantic are to be commended on a piece that showcases what’s good in journalism. In a saner media and political climate, it would shame other outlets into covering a world-historic tragedy. Don’t hold your breath.