The left hasn’t just circled the wagons around freshman Minnesota Rep. Ilhan Omar, it’s going on offense. The weapon of choice is, of course, the press. Roll Call’s Emily Kopp targeted two groups critical of Omar with a March 6 hatchet job notable for its dishonesty and its bias. 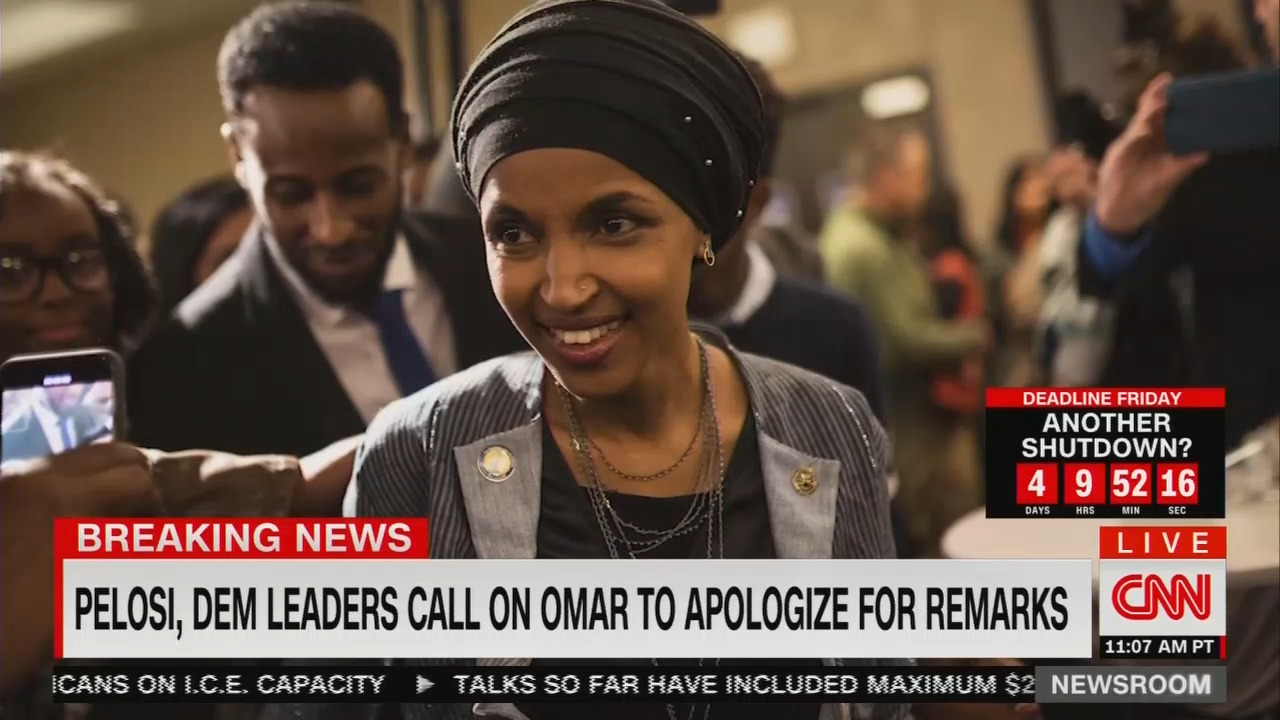 Those groups, ACT for America and the Center for Security Policy, had the effrontery to sign a letter to Speaker Nancy Pelosi (who is, er, coincidentally, Kopp’s old boss) and Chairman Eliot Engel (D-NY) asking that Omar be removed from the House Foreign Relations Committee.

The letter said her “carelessness and poor judgement” show she “lacks the temperament for someone who is tasked with objectively addressing the volatile issues in the Middle East.”

In other words, Omar has been a firehose of overt anti-Israel hatred and not-very-carefully concealed anti-Jewish hatred. The House Foreign Affairs Committee is a big platform for a little bigot.

“But,” wrote Kopp, “the coalition behind the letter — described by conservative media to be ‘leading Jewish organizations’ — includes groups that maintain no relationship to the American Jewish community and peddle anti-Muslim conspiracy theories.” She then shifted into full slime mode, typing that, “One of the groups was once found to have ties to a longtime neo-Nazi.”

Her article hinged on the fact that ACT for America and the Center for Security Policy have been “classified as anti-Muslim hate groups by the Southern Poverty Law Center.” More damning for Kopp, one suspects, “Both have ties to the Trump administration.”

“Critics say?” That means “Kopp says,” and it’s bush-league, dishonest journalism. So is Kopp’s repeated reference to “U.S. Wars.” (Actually, that’s activist-speak. You don’t think Kopp reads a lot of lefty anti-American press releases, do you?) Kopp’s entire case against ACT for America is built on lies. For instance, it’s supposed ties to a neo-Nazi? Nope.

In 2017, ACT sponsored a number of “March Against Sharia” rallies across the country to highlight the danger of Sharia Law and political Islam. Here’s how Kopp describes what happened:

Longtime neo-Nazi Billy Roper organized the Arkansas event for the group, according to the SPLC. Roper once served as the state leader of the National Alliance, a now defunct neo-Nazi group that agitated for Jewish genocide. ACT subsequently disavowed Roper.

Here’s what really occurred: A man named Billy Roper volunteered to organize the June 10 March. ACT found out before the event that Roper was a white supremacist and was planning to glom his Shield Wall Network’s own demonstration on to ACT’s. ACT canceled the March and Roper was “permanently banned from any affiliation with our organization.” Nothing happened “subsequently.”

(Chronology isn’t Kopp’s strength. According to ACT national grassroots director Thomas Hern, Roll Call reached out to ACT for comment at 5:06 pm March 5. ACT responded just 24 minutes later. But when Kopp’s piece appeared the next day, it didn’t include ACT’s comments, instead saying “ACT could not be reached for comment.” Hern had to tweet her several times before she replied, saying, “This was an unintentional oversight. I’ll update our story.” She did, but the article has no “Editor’s note” or any other indication that it had been altered.)

And we’ve identified the source of Kopp’s problem. SPLC is a progressive direct mail giant — a lefty hate group that makes money screaming “Hate Group” at anyone to the right of The World Workers Party. These include mainstream Christian and religious freedom groups.

As a matter of fact, in 2017 conservative leaders formally asked media outlets to cut ties with SPLC because it’s “Hate Map” and “hate reports” are used to bash conservative groups and silence political opponents. The FBI and DOD have each ceased using SPLC research. The group’s also inspired more political violence than any conservative “hate” mongers it’s slandered.

Just ask Like Leo Johnson, building manager at the Family Research Council. Johnson took a gunshot wound subduing Floyd Lee Corkins in 2012 when the unhinged gay activist entered the FRC’s office in D.C. with a plan to kill everyone there and stuff their lifeless mouths full of Chick-fil-A. He got the idea from SPLC’s “Hate Map,” which listed FRC, a Christian organization focusing on traditional values. (James Hodgkinson was also an SPLC fan. He was the Bernie Bro who shot up the Republican baseball practice and nearly killed Rep. Steve Scalise. But, you know, hate only flows in one direction.)

Still, if anybody would know about the denigration of Muslims, it’s SPLC. The group was recently ordered to cough up $3.4 million and an abject apology to a Muslim anti-Sharia activist it had smeared.

If Kopp didn’t know any of this, she might get a pass as naive. But she acknowledged it in the article. Besides, she’s been in D.C. for years and worked for Pelosi and a Democrat Georgia state rep. She knows exactly who and what SPLC is.

And she’s not alone in smearing ACT this week. Media outlets were quick to pick up and slow to correct a report that the group had equated Oman with the 9-11 terrorists. The stories had something in common with Kopp’s besides execrable journalism. They got their information from SPLC too.