The show was bigoted, vile and unfunny. The characters were one-dimensional, the gags were as obvious as they were offensive, and the entire thing never rose above predictable anti-Catholic, pro-gay agitprop. The ratings were bad and even the critics didn’t care for it. So of course ABC went ahead with development and then gave The Real O’Neals a second season. 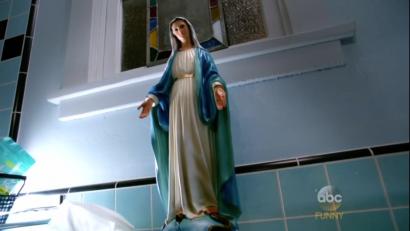 But there won’t be a third. According to Deadline Hollywood, “ABC has canceled sophomore [sophomoric is more like it] comedy The Real O’Neals. The family comedy showed enough promise in its midseason launch last spring to get a second season but has delivered disappointing ratings in its second year.”

Supposedly based loosely on the youth of noted anti-bullying bully, militant gay activist, bigot and sex columnist Dan Savage, The Real O’Neals centered on an Irish Catholic family and their gay teenage son. Far from being a gentle send-up, the sitcom was as nasty and contemptuous of traditional family life and religion as Savage is himself. In the first episode MRC counted 93 separate visual or verbal reminders that the show targeted Catholics, including a statue of the Blessed Virgin on the toilet back to remind the O’Neal boys to “put the seat down.”

After ABC ordered the pilot for The Real O’Neals in 2015, MRC organized a protest, along with other conservative and religious organizations. The show lost at least one sponsor during its brief run thanks to the efforts of The Catholic League. But the show collapsed under the weight of its own hatred and agenda. Americans tuned out. Thanks be to God.