NBC officially joined the streaming wars on July 15 with its new service Peacock and with it comes a host of new original shows. Unfortunately, one of the first impressions we have of the new streaming site is a horrible butchering of a literary classic. Brave New World, an iconic English novel, has now been reduced to a vulgar, sex-driven, liberal mess. 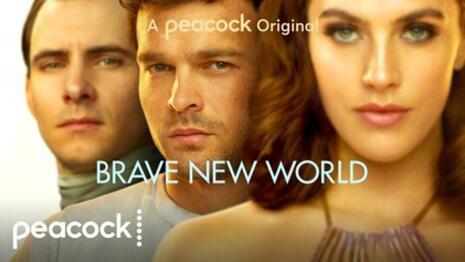 The series, which premiered July 15, roughly follows the plot of the original novel up to a point. Namely, we follow a futuristic society based on genetically-engineered caste systems and maximizing personal pleasure known mostly as New London. In the process, the people have abandoned religion, monogamy, privacy, and even families and devote themselves to constant sexual arousal with the help of the placating drug soma. Two members of this society then venture out to the “Savage Lands,” a place where people live in more “primitive” and traditional ways following monogamy and religion. They then bring back a Savage named John who explores the vapid city for himself and experiences a cultural crisis that impacts nearly all the prominent characters.

Unfortunately, that’s where the similarities end. In adapting the book, the nine-episode series takes borderline nonsensical liberties with the source material to suit its modern political needs. For one thing, the adaptation of the “Savage Lands” is revised from its politically incorrect depiction of the Puebloan Native Americans to a backwater amusement park for New Londoners. Instead of natives living off the land, we have white trash outsiders scraping by in a Disney World rip-off designed to parody old traditions like monogamy. This leads into the perfect opportunity to ridicule capitalism as one section of the “Savage Lands” mocks the past’s obsession with buying things in a lousy Black Friday staging.

Tour Guide: And welcome to the Savage Lands Adventure Park. Even certain days of the year continue to hold great superstitious meaning for the Savages, but from Savage lore, we know that none were more important than the annual Day of Black.

Lenina: Who are they?

Bernard: They’re-they’re part of it.

Tour Guide: Ah, and what luck. These Savages have come to share their festival with us.

Announcer: Ladies and gentlemen, please take your seats. Our show is about to commence.

We also have an unusual amount of focus given to class inequality in the series. While the book did reference the separation of people into social classes, the show now treats it as a major plot point. The outsiders and Savages kick things off by rebelling against their New London patrons, claiming ownership of the land. John the Savage (Alden Ehrenreich) follows suit by eventually leading an uprising of the lower-class Epsilons in New London itself. They soon pick up the slogan “No one above, No one below” as a rallying cry and become inspired to riot and kill their superiors in chaos. Funny how a book that promoted individuality devolved into a socialist creed.

But there’s no difference greater than the one in John himself. In the novel, John is a strong-willed, moral outsider who sticks to his Shakespearean ideals of dignity and humanity even in the face of a vapid society. Here, he’s nothing more than a foul-mouthed hipster rebel without a cause, rebelling out of plot necessity rather than actual morals. The show has over seventy f-bombs and most of them come from him as he sputters out half-baked themes in a desperate attempt to seem deep. The book once offered such inspiring quotes like “But I don’t want comfort. I want God, I want poetry, I want real danger, I want freedom, I want goodness. I want sin…I’m claiming the right to be unhappy.” The show has this:

John: Don’t. Don’t clean that up! Jesus. What is with you guys?

In a bizarre way, it’s probably an example of what Aldous Huxley warned about in his novel. Brave New World is a show obsessed with the appearance of being deep and edgy without actually asking any deep questions. When the world in question involves constant sex, drugs, and no religion, it seems the left actually prefers the dystopia. And there’s nothing brave or new about that.