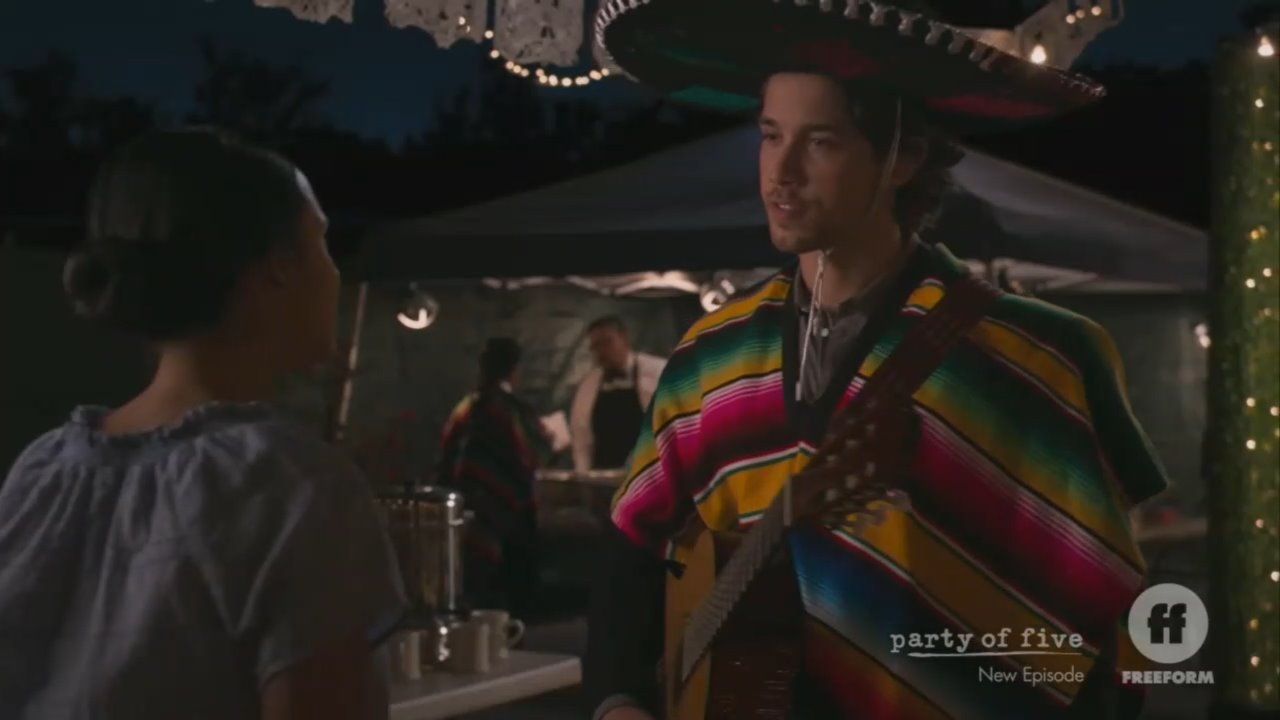 We’ve seen how little Freeform’s Party of Five thinks about U.S. immigration laws, but it turns out that was just the tip of the iceberg. Apparently, the 2020 reboot also doesn’t think highly of rich white people either. What a predictable development for this blatantly political show.

The January 22 episode “Authentic Mexican” sees eldest sibling Emilio (Brandon Larracuente) scoring a catering gig for the family restaurant to earn more money. However, since the restaurant is not used to catering, he’s forced to reach out for extra help to appeal to a new, wealthy demographic, and that help includes his siblings.

While they eventually agree to help cater the event, his sister Lucia (Emily Tosta) is angry to find the party hostess forcing Emilio into a poncho and sombrero “like a Mexican bobblehead.” This somehow becomes a bigger issue to Lucia than helping her family’s business.

Lucia: What the hell are you wearing?

Emilio: It's, it's a little gross, okay? I can't exactly make a stink.

Lucia: Why would you have to make a stink? Couldn't you simply just say, "um, excuse me, ma'am. I feel uncomfortable dressing up like a Mexican bobble head."

Emilio: I don't need you to go all social justice warrior on me, okay, Lucía?

Lucia: I can't have a point of view?

Emilio: Yes, you can have a point of view. Just keep it to yourself. Look, if I mouth off to that woman, I'm gonna blow the tip, and no way will this lead to anything bigger. These are rich people. Connected people. We make a good impression on them, and this could lead to-- I, I don't even know what, okay? Something better. Something bigger for all of us. And four of them have already asked for my card.

Lucia: So more people want you to go to their homes and play "La Cucaracha"?

Of course, the show has to put Lucia in the right to keep up its own social justice agenda. Following the hostess putting Emilio in a sombrero, Lucia accidentally crashes a catering van into a party guest’s car. The wealthy party goer is obviously angry about the crash, but it’s Lucia who ends up madder when the man attempts to get $5000 from her out of damages because she’s “a girl” who makes tortillas. It’s just another example of rich, white people being ignorant jerks in this episode. Thank goodness for the more enlightened Hispanic teenager to set things straight.

Lucia: I'll give you my number, and when you figure out what it's gonna cost to fix the bumper, you can-

Dan: Really. Oh, I'm sorry. Do you have, like, a-- an auto body side job that you do? Do you, honey? Because let me explain something to you about the repair costs on a classic Rover.

Lucia: No. I mean, you're thinking because I'm a girl, I don't know car stuff.

Lucia: That is not a classic Range Rover. It's gotta be 15 years or older to be a classic. And the actual classic designation requires a low production run, unique lines, and a well-known body designer. Don't underestimate me because I know how to make tortillas. If you can wait till the end of the night, I'll get you $1,000 cash.

Dan: A thousand dollars. You know what? Why don't we just call the cops and see what they say?

Lucia: And I could go back in there and tell your friends that you called the police on the caterer's kid sister because she refused to let you gouge her.

Emilio eventually learns better himself when a guest demands Emilio fire his younger brother Beto (Niko Guardado) for kissing his daughter. Emilio stands his ground and decides to pack up and leave after being told to drop Beto back on “whatever street corner you found him.” It's quickly water under the bridge as Emilio eventually confides in Lucia that they probably would have made more money at the restaurant anyway.

This is all supposed to be part of what showrunner Amy Lippman calls “a much better idea than the original.” Instead of a show about a family, we get plots about evading the immigration system and showing how terrible white people are. The only people who could think this is “better” are social justice warriors like Lucia, who, at this point, really should keep it to themselves. Television would be so much better without them.