HBO's ‘His Dark Materials’ Finale: The Church ‘Controls,’ ‘Oppresses,’ and ‘Frightens’ the Masses

Less than 72 hours away from Christmas, and we still find a show denouncing and demeaning the Church. HBO’s His Dark Materials marks the day before Christmas Eve with a finale reminding us how the Church controls, oppresses, and frightens the masses for its own gain. Liberal TV clearly never takes a holiday break. 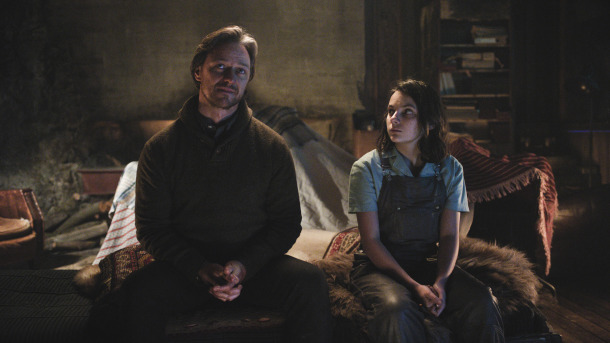 The December 23 finale “Betrayal” reunites our protagonist Lyra (Dafne Keen) with the explorer Lord Asriel (James McAvoy) who was revealed to be her father. He soon reveals to her that he’s been studying the substance known as “Dust” which the religious ruling class Magisterium believes causes sin. Over the course of the season, he discovers that Dust may emerge from another world through the Aurora Borealis. Because of that, he questions whether Dust may actually cause sin in people or whether the Magisterium claims it does to control others. After all, we can’t conclude that a system that would murder children and suppress knowledge wouldn’t also be lying.

He literally says as much as he explains this concept to Lyra.

Asriel: For the longest time, the Magisterium completely ignored Dust. But then it was discovered that Dust only begins to settle on humans going through puberty. The connection was made to Adam and Eve, and they labeled Dust as Original Sin.

Asriel: When did Eve's daemon settle?

Lyra: When Eve ate the apple like the serpent told her to.

Asriel: Well done. And the serpent said, "You shall not surely die. "For the Authority doth know that on that day that ye eat thereof, "Your eyes shall be opened. Your daemons shall assume their true form, and ye shall be as...

Asriel: ...Dust." You see? They have been trying to convince us for centuries that we are born guilty, and that we have to spend a lifetime atoning for the crime of eating an apple. Is there any proof for this heinous stain, this shame, this guilt? No, not at all. We are to take it on faith and on the word of the Authority. But Dust... Dust is an elementary particle that we can record, measure, study. We can take photograms of it. And it has given them what they need-- a means by which to control, to oppress, to frighten, and to keep us where they want us-- on our knees.

Lyra: That's what my mother thinks she's doing-- cutting away our daemons, preserving our sinless souls.

I have to give them some credit for attempting to quote Scripture, albeit adding a reference to daemons and replacing “God” with the “Authority.” Also, since Asriel later murders Lyra’s own friend to prove his theory on Dust, he’s clearly not a perfect authority either. But the finale pretty much lines up with every other sentiment the show has on the Church. Namely, if the religious aren’t oppressive, then they’re probably just evil liars.

And plenty of characters representing the Magisterium turn out to be both. Mrs. Coulter (Ruth Wilson), the head of the Magisterium’s General Oblation Board and Lyra’s mother, follows the Church while also kidnapping and murdering children. Many priests in the group such as Father MacPhail (Will Keen) seem to turn a blind eye or even approve of this behavior as long as the public doesn’t learn about it. With a Church like this, who needs sin?

After eight episodes of the series, it’s clear that His Dark Materials is following in the footsteps of the book series before it. It loathes Christianity and everyone who represents it, just like its author Phillip Pullman. Unfortunately for us, the series was already renewed for a second season, so we can’t hope for it to die in obscurity like the movie adaptation. Hopefully next time, however, they can avoid spoiling the Christmas holiday.