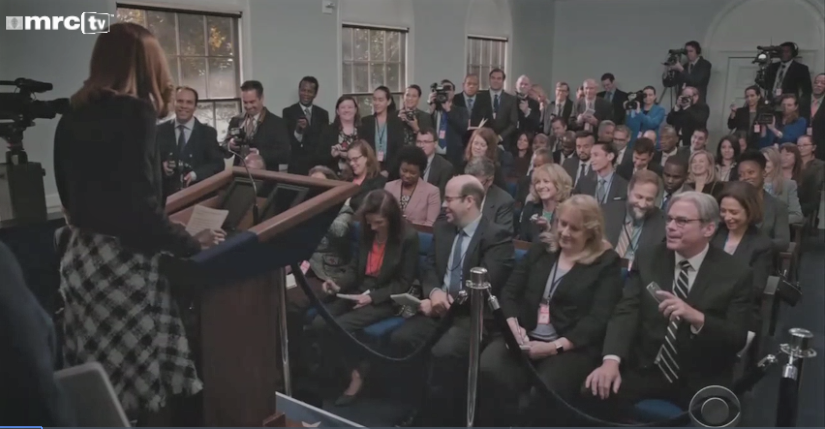 Even in its final season, CBS’s Madam Secretary is still managing to squeeze in more liberal pandering. As if the Hillary Clinton-esque female president wasn’t enough, now we get a scene fawning over the press. It’s enough to make one thankful the ending’s only five episodes away.

The November 3 episode “Daisy” focuses on a scandal surrounding President Elizabeth McCord’s (Téa Leoni) press secretary, Daisy Grant (Patina Miller). In light of the recent allegations that Elizabeth’s campaign colluded with Iran to release incriminating information against her opponent, Daisy admits that she met with an Iranian agent who offered said documents. Although Daisy had access to the information, she states she did not leak them to the press, though only the reporter can confirm or deny that.

The reporter, Valerie Guillen (Jenn Colella), however, refuses to give up her source to clear Daisy and gets charged with contempt of court when she defies a subpoena. In solidarity with their fellow reporter, the White House press corps walk out during a conference to protest Valerie’s imprisonment. While Elizabeth believes her friend Daisy, the bombshell reveal of Daisy’s connections to the potential collusion enrages her political opponents, especially right-wing Senator Mark Hanson (Wentworth Miller).

To appease both sides, Elizabeth eventually pardons Valerie and accepts Daisy’s resignation as press secretary. Daisy graciously leaves office after her final press conference where she ultimately praises the reporters who hounded the administration. Yes, it’s really that eye-rolling.

Daisy: Growing up, I never believed I'd get to see a female president, or any president that I could admire with my whole heart. But I not only reached that mountaintop. I got the chance to work here. It has been the privilege of a lifetime to work for Elizabeth McCord. And a great part of that privilege has been getting to work with all of you. When I ask my daughter Joanna what she wants to be when she grows up, she doesn't say a vet or a cop or a dancer. She says a reporter. (Chuckling) Because even my four-year-old daughter notices how tirelessly you work to keep our citizens informed and their government accountable. And you get to talk back to me on TV. Okay, I think that's most of it. But still, I may not always agree with you, but I respect the work you do. And I couldn't be prouder of the role you play in our democracy. So, keep the faith and fight the good fight. Ms. Lopez will take your questions now. Thank you.

I’m not sure which is more unbelievable: the fact that there are press members against Madam President or that they want us to believe journalists “fight the good fight” to “keep our citizens informed.” When our current press is obsessed with Twitter, defends the reputations of terrorists, and props up impeachment schemes, it’s hard for me to believe they’re doing that much good for the country. There are certainly reporters who can match up to the ideals we’d hope for, but I wouldn’t want them approved by this fictional administration.

It’s once again another time for Madam Secretary to show us the “right” way of doing things. The series wants us to believe that we shouldn’t criticize the press, but let them do their noble job, no matter how obviously dishonest it can be. And it’s that kind of attitude that once again explains why don’t have a real life “Madam President” today.