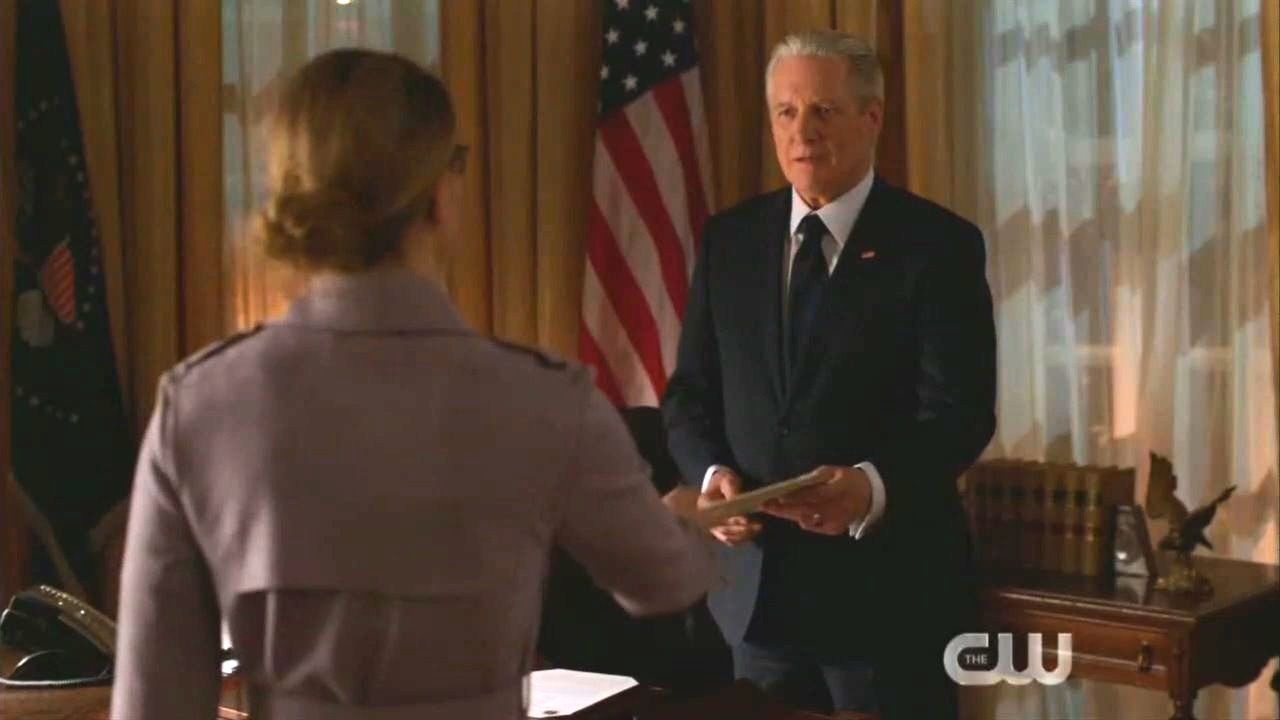 Now we know why Supergirl was so quick to replace its Hillary Clinton-esque president. There’s no way they would have set up these plots if she were in charge. The most recent episode of the CW comic-book series follows more media delusions about “Trump’s America,” most notably with extensive ICE raids and foreign collusion.

The May 5 episode “Will the Real Eve Tessmacher Please Stand Up?” follows Supergirl/Kara Danvers (Melissa Benoist) traveling to the fictional Eastern European country of Kaznia to research an evil plan by Lex Luthor (Jon Cryer).

In the meantime, Ben Lockwood (Sam Witwer), the Secretary of Alien Affairs and leader of the anti-alien Children of Liberty, begins hunting down illegal aliens with DEO and FBI agents. The show has indeed become so unsubtle that they actually use the term “illegal aliens” and have agents tracking them down in a pseudo-ICE raid. Lockwood claims to be after the alien who recently murdered his wife, but he quickly arrests every “innocent” alien, too.

Lockwood: Where's the Brevakk who killed my wife?

Cooper: I got her.

Lockwood: Take her out of here. And rendition the lot of them for enhanced interrogation.

Brainy: Mr. Secretary, we found who we were looking for. The rest of these aliens are innocent of any crimes.

Lockwood: They were harboring a murderer. Move.

The series has made it clear that illegal aliens are parallels to illegal immigrants, but it’s never made it clear why they aren’t illegal. The aliens, just like illegal immigrants, unlawfully entered the United States and now collect all the benefits of the country without being real citizens. As far as I’m concerned, that’s not “innocent,” no matter how many sad faces they show.

As for the obvious ICE agent stand-ins, the episode decides to offer them a sort of redemption. Brainy (Jesse Rath), a DEO agent and alien himself, later convinces the agents to disobey Lockwood’s orders since it compromises their oath “to defend this country and its constitution.” What’s really compromising the oath is defending foreign intruders, but the plea manages to stir doubt in the other agents.

Brainy: No! Each one of us swore an oath to defend this country and its constitution. The Secretary is asking you to compromise that oath. I urge you. Follow your hearts. Not your orders.

In some dream world, I’m sure the writers hope all ICE agents will “follow their hearts” instead of orders. In the real world, to “follow your hearts” that way would mean looking the other way on thousands of illegal aliens who have a criminal record.

But the real doozy comes near the end. Supergirl soon discovers a plot involving the Kaznian government, Lex Luthor, and the President’s Chief of Staff. Being concerned, she speaks to President Baker (Bruce Boxleitner) as reporter Kara Danvers to reveal info on the apparent “collusion” under his nose. The President soon reveals that the collusion runs deeper than that.

President Baker: So, where do we start?

Kara: The United States is in danger, sir. I came here to warn you.

President Baker: Of what?

Kara: Lex Luthor has allied with the Kaznian government and they are going to attack. And Supergirl didn't attack you. A clone that worked for Lex did. And your Chief of Staff is in collusion with him.

President Baker: Do you... Do you have any proof? I wanna thank you for bringing this to my attention. Now, Miss Danvers, uh... Has anyone else seen this evidence?

Kara: No, I... I thought it was more important to warn you as soon as possible.

President: You did the right thing.

I’ll give the show this, Supergirl found more foreign collusion in one episode than the Democrats have in more than two years. If this twist was always the show’s plan, they were probably more disappointed in the Mueller report than MSNBC was.

The fact is, Supergirl once again reflects a world that doesn’t exist to lecture us on issues that aren’t real. It almost makes one long for another transgender episode.