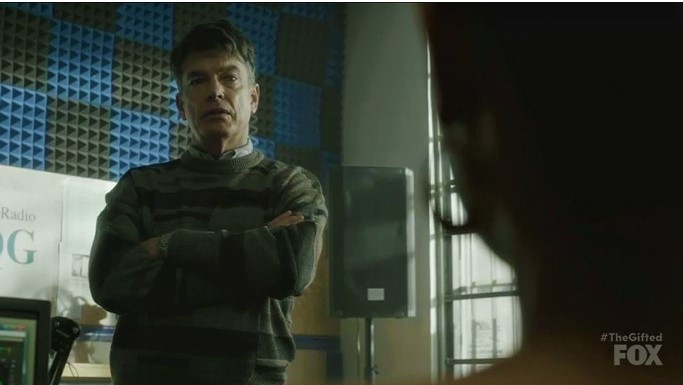 Fox’s X-Men series The Gifted has unfortunately been a reliable source for left-wing propaganda lately. This week makes matters worse by dragging down the show's right-wing pundit even further than before. Make no mistake, this is definitely how the series views the right.

For a few episodes, the show has painted the right-wing TV pundit Benedict Ryan (Peter Gallagher) as a budding Big Bad for the rest of the season. As the stereotypical Fox News anchor, he’s mostly portrayed as a bigoted jerk and showrunner Matt Nix just confirmed he's based on Sean Hannity. In an interview this week, Nix provided the context, saying, “The people at Fox, they were like, ‘Who’s the villain this year?’ I was like, ‘Sean Hannity.’ And they were like, ‘Sold. Done.’”

From secretly leading a mutant-hating organization to spreading familiar propaganda on the news, Ryan’s just as big a threat as the mutant terrorist group the Inner Circle. However, recently the series added another possible wrinkle to his character: he’s secretly working with the mutant terrorist group. The February 12 episode “calaMity” clears any ambiguities about Ryan being a villain by showing us a flashback to his first meeting with Reeva (Grace Bryers), the leader of the Inner Circle.

Benedict Ryan: I don’t understand. When you called, I thought this was about some kind of job.

Reeva: What I’m offering is much more than a job. Think of it as a partnership.

Benedict Ryan: A partnership? I don't even know who you are.

Reeva: Oh, but I know plenty about you. The businesses that you sold to investors and then ran into the ground. That "Run" for Congress. Sixth place, was it? And now this.

Benedict Ryan: For your information, this is a top talk radio program.

Reeva: In Maryland? Let's not mince words. Mr. Ryan, you are a failed two-bit opportunist. You saw the wave of anti-mutant hate after 7/15, and you have been trying to ride it to fame and fortune ever since. Well, I've got great news. I'm here to help you. Mr. Ryan, I have been looking for someone like you. Someone with your need. Someone with your raw ambition. And, not to mention, your face is wasted on the radio. How would you like to be the most important man in America? I can make it happen.

Benedict Ryan: How exactly would you do that?

Benedict Ryan: I'm not working with a mutant. I am a patriot.

Reeva: No, Mr. Ryan, you are a salesman. And I've got something for you to sell.

So the pseudo Hannity is a “failed two-bit opportunist” and “salesman” willing to work with terrorists to keep an audience. It may come as a shock to Nix and other television producers, but there are millions of people who probably wouldn’t agree with that portrayal of Sean Hannity.

While Nix swears that the show isn’t a “right-wing thing versus a left-wing thing,” it’s hard to see it as anything but that. This season alone has depicted ICE raids and stand-your-ground laws in ridiculously unflattering lights, and now it’s placing right-wing TV hosts as outright bad guys. Plus, Nix himself shows some incredible leftist ignorance in his interpretation of current events.

For example, Nix describes an unused episode outline from last year that involved mutant children being taken from their parents and put in cages. He explained its background, stating, “It all happened before anything happened in the news. The executives were like, ‘Yeah, this is a little extreme. I don’t think anybody’s going to take children from parents and put them in cages. So, I don’t think we could do this storyline.' And then literally like a month later, they were like kids in cages in America.”

Nix may believe that his series can appeal to both sides, but anyone who’s not a leftist recognizes that the detainment of illegal immigrant children in "cages" started happening long before Trump was in office. It’s no surprise that The Gifted would have reflected that ignorance as well, the only upside is that episode never seeing the light of day.