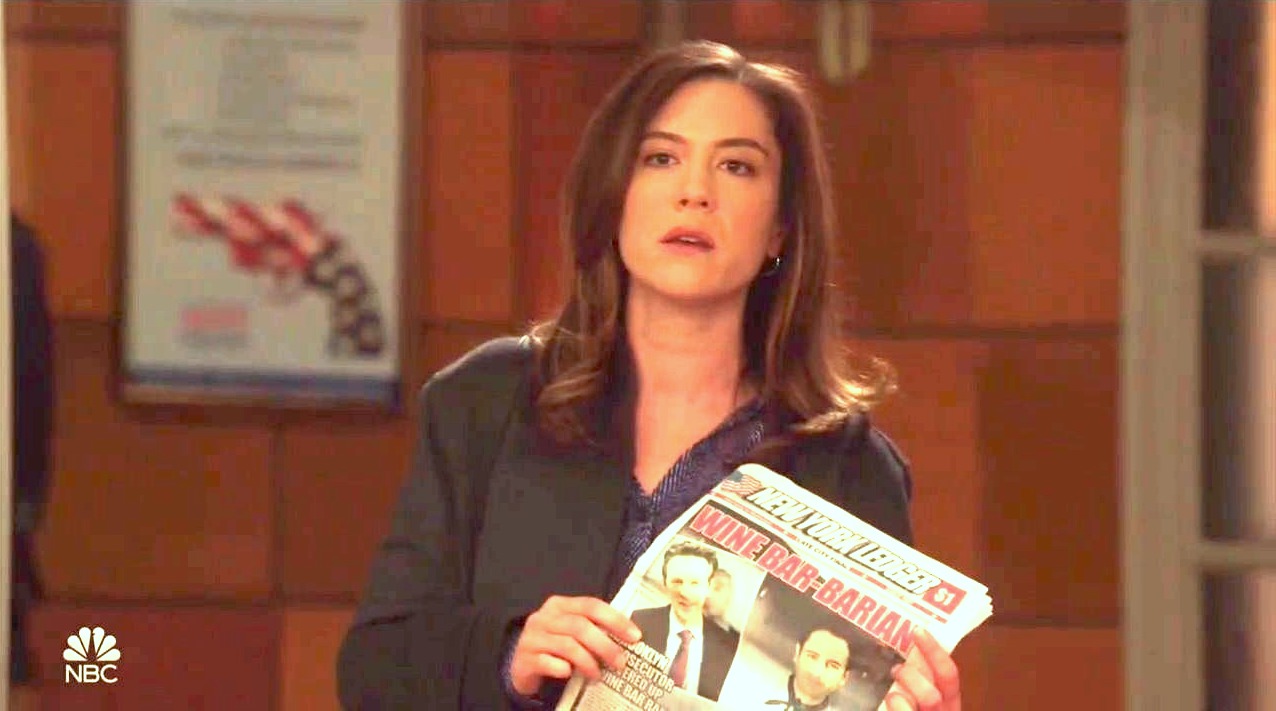 NBC’s Law & Order: Special Victims Unit is back with another whopper of an episode. After covering illegal immigration and school shootings, the fictional cop show kicks the bias up a notch by addressing the Justice Kavanaugh allegations. What could possibly go right with this?

The November 8 episode “Hell’s Kitchen” starts out with the investigation of the rape of a waitress by a notable chef. The waitress, Kayla (Genevieve Angelson), initially doesn’t want to press charges against her boss, Andrew Liebowitz (Luke Kirby), but the Special Victims Unit takes charge and convinces her to testify against her rapist. The story immediately resembles the case against Mario Batali, also a notable chef under fire for sexual assault allegations. Considering Law & Order boasts “ripped from the headlines” plots, that’s not a surprise. However, things aren’t always that simple for this series.

While a chef secretly raping his employees is abhorrent on its own, the unit discovers that several other allegations against him were dropped by Brooklyn ADA Chris Hodges (Jacob Pitts). Since Hodges is a prominent lawyer in the #MeToo movement, Olivia (Mariska Hargitay) finds it hard to believe he’d turn down a high-profile case like that. Sure enough, the investigation finds that Hodges and Liebowitz attended high school together. Even worse, when the case leaks, a woman soon comes forward with a high school allegation against Hodges. Suddenly, this story sounds remarkably similar to another case.

Bethany: I was 15. This girl was having a party because her parents were away. She invited some kids she knew from Far Rockaway.

Olivia: So...what happened at this party?

Bethany: There were 10 or 12 of us. One of the boys brought tequila. I remember winding up in one of the bedrooms with Chris and one of his friends.

Olivia: Andrew Liebowitz? The other man on the front page?

Bethany: Could be. I don't remember his name. I can't say for sure.

Bethany: Chris pushed me to the floor and got on top of me.

Olivia: Bethany, I know how hard this is to relive, so... Just--just take your time, okay?

Bethany: He pinned me down. Put his hand down my shorts. And the other boy, he was saying things to him.

Bethany: Like a cheerleader. "Go for it, dude." Things like that. And I was screaming, "No, no, get off me." But he covered my mouth. Chris pulled down my shorts with his other hand. The other boy came over I think maybe to give him a condom. And that's when I pushed him off me and ran out of the room.

Olivia: And this was the first time that you had met Chris?

Bethany: No, I met him before. I definitely knew his name. And when I read the article today and saw his picture...

Olivia: Okay. And after this happened to you, Bethany, did you tell anyone?

Bethany: When I got home, I couldn't think straight. My dad was strict. If he knew I was drinking with older boys... My therapist knows.

Bethany: I've been seeing her for years. She said I should tell my husband, so I finally did last year.

Olivia: And after all this happened, did you confide in anyone?

Bethany: No. But my friend Emily was at the party. When I got out of that bedroom, I made her leave with me. She could see I was really upset.

That’s right, this episode is tackling Christine Blasey Ford’s accusations against Justice Brett Kavanaugh. Never mind that Ford’s story had several conflicting features like a fear of flying. Never mind that sex crimes prosecutor Rachel Mitchell even stated that the case is even weaker than a “he said, she said” argument in a memo. Never mind that even now Ford is choosing not to press charges despite having the entire Democratic Party on her side. In the world of Law & Order: Special Victims Unit, that’s still a valid rape story. And they’re eager to put their spin on it, making it more credible by having her friend back up her story (of course, Ford's friend denied ever even meeting Kavanaugh).

Hodges claims that Liebowitz was in fact that man who sexually assaulted a girl in high school. To prove it, he wears a wire to coerce a confession out of his friend. In the end, both of them are revealed to be predators. Hodges even name-drops Justice Kavanaugh in comparison to his case.

Hodges: You gotta behave, Andrew, these days. You're playing with fire.

Liebowitz: Well, lucky for me, you're good at putting them out.

Hodges: Yeah, well, that's why I wanted to talk. I can't protect you anymore.

Liebowitz: This time you didn't have to.

Hodges: Stone came to see me, you idiot, about the three Brooklyn cases. I saved your ass. Again.

Hodges: But that's it. I've got a PAC now. I'm making a run for office.

Liebowitz: Okay. I get it.

Hodges: I don't think you do. I don't wanna get Judge Kavanaughed here. If that thing back in high school comes up—

Hodges: At that party. Bethany something.

Liebowitz: You mean the girl who wouldn't let you screw her?

Liebowitz: That was you, man.

Liebowitz: Yeah, we got her drunk on tequila shots, and you tried to rip her pants off.

Hodges: What are you talking about? I had to pull you off of her.

Liebowitz: No, bro, you were the one who was into that girl.

Hodges: What are you, crazy?

Liebowitz: You're thinking of some other girl we did at some other party.

Hodges: My God. You're out of your mind.

Peter: Now we have Hodges.

Olivia: Yeah, and guess what? Mr. Me Too is a serial predator. Okay, guys, go. Two collars. Go.

Hodges: You are just be-- You are confused.

Liebowitz: Not about that.

Hodges: How would you even remember? You were a pathetic drunk.

Liebowitz: Right, 'cause you were some kind of saint back then.

Hodges: Compared to you, I was Mother Teresa.

Liebowitz: All we did in high school was think about getting buzzed and getting laid.

Hodges: You did, not me.

Hodges: You son of a bitch.

Dominick: Andrew Liebowitz, stand up. Put your hands behind your back.

Liebowitz: Whoa, what's wrong with you? I'm still out on bail.

Dominick: Your pal here was wearing a wire.

Liebowitz: You son of a bitch.

Olivia: Well, you're next, Counselor.

Olivia: I believe Bethany. Your little rape partner corroborated her.

Fin: I'm gonna do more than that if you don't put your hands behind your back.

Hodges: What? You don't think they're coming for you someday?

As expected, the show ends on the leftist result it wished happened rather than the one they got. Unlike Kavanaugh, Hodges is arrested for the allegations set against him, and the women are fully vindicated. Even worse, the concept of the Kavanaugh character being innocent is almost mocked. He not only isn’t innocent but an enabler as well. This scene alone practically snubs Kavanaugh's claims to be a virgin in high school and doubles down on the theory that he and his alcoholic friend hosted rape parties as teenagers. I’ve yet to see these claims about Kavanaugh himself proven, but facts haven’t stopped the left yet.

Facts also don’t stop the show’s star Mariska Hargitay from taking sides either. On her Twitter account, regarding the allegations against Kavanaugh, she wrote "The boys club attitudes, rape culture, willful ignorance, misplaced blame [and] doubt...are also reasons survivors don’t come forward. I believe you Dr. Blasey Ford #BelieveSurvivors." Does she really expect people to #BelieveSurvivors with no evidence, corroboration, or even a coherent allegation? I’m glad she’s not a real cop.

The story here is fictional, but it’s all too clear that Kavanaugh is the real-life villain here. The series paints a picture of him as a sexual predator that many liberals just will not let go. Judging from this episode, they won’t let us move on, either.