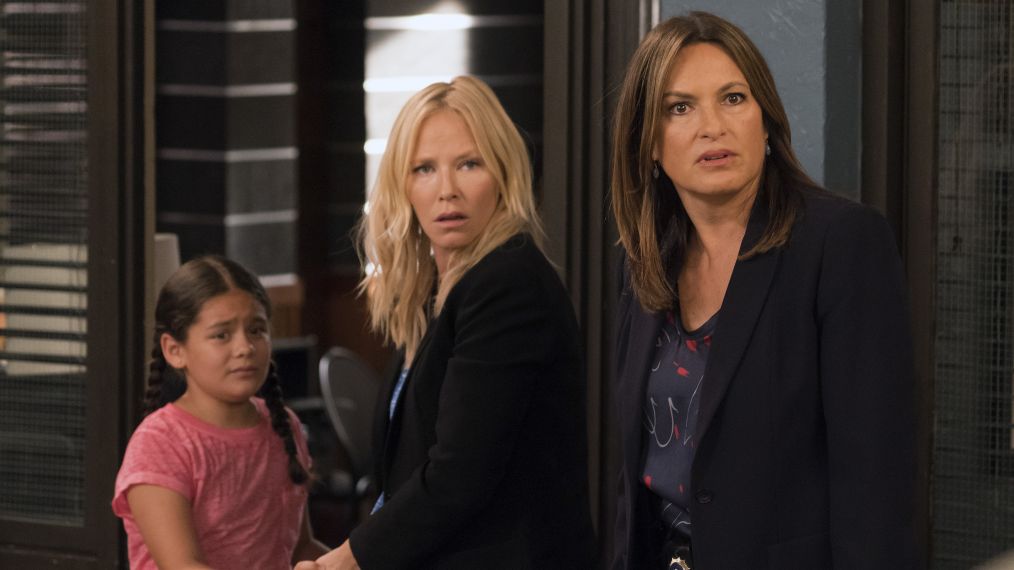 Last week's NBC's Law & Order: SVU got off to a pretty rough start. Now it seems like one of the writers saw that school shooting premiere and thought, “We can do worse!” The latest mess of liberal propaganda focuses on the separation of families at the border, and, just as expected, everything goes wrong.

The October 4 episode “Zero Tolerance” focuses on the apparent “ripped from the headlines” story on children being separated from their families at the border. When nine-year-old Gabriela Sosa (Scarlett Lopez) gets caught up with a sex trafficker, the Special Victims Unit naturally works to reunite her with her family. However, they quickly become involved in the political crisis as they discover the girl and her mother were actually illegal immigrants separated from each other at the border.

Literally, Gabriela’s foster parents explain how “our government,” aka the EVIL President Trump, ripped a nine-year-old girl from her mother along the Mexican border as they tell detectives how the little girl ran away and ended up in New York.

Foster dad: Please don’t be angry with us. We did the best we could to make her comfortable here, but after all she's been through—

Carisi: What do you mean?

Foster dad: Well, you've--you've seen the news. You know what's been going on.

Foster mom: She was brought to us after she came across the border, after our government separated her from her mother.

And we only get worse from there as the story continues. Lieutenant Olivia Benson (Mariska Hargitay) also becomes more indignant regarding the case to the point of arresting a refugee resettlement officer for simply doing his job. Again, this is said quite explicitly.

Fin: LIV. This is Mr. Phelps. He's a refugee officer from ORR.

Olivia: Lieutenant Benson. I'm--I take it you have some paperwork. Fin. –

Carisi: So where you taking her?

Olivia: Oh, so she'll be at an Army base behind razor wire.

Phelps: No, Lieutenant. She'll be in a dorm-like setting with other minors. It's almost like summer camp.

Olivia: Summer camp. Except she doesn't go home to her family.

Olivia: Gabriela, um, this is Officer Phelps. And I'm so sorry, but he--he has to take you—

Phelps: It's going to be okay, dear.

Gabriela: He was the man who take me away from my mother. [Heavy breathing]

Olivia: Is that true?

Phelps: I was at the border when Maria Sosa was processed. I took custody of Gabriela and escorted her and several other children to the foster agency here in the city.

Rollins: So you're the one that separated her from her mother? - That was the policy, detective. I'm sure you're aware of that.

Phelps: Is this some kind of sick joke?
Olivia: You're being charged with kidnapping in the second degree.

Phelps: For doing my job?

Olivia: You abducted a minor and transported her against her will to New York City. That's a class B felony in this state.

Phelps: You're gonna be sorry about this, Lieutenant. Very sorry.

As you can tell by now, it’s pretty clear where the show stands. We have an evil government with callous officers that rip little girls from their mothers. The episode is chock full of moments meant to force you to sympathize with the family’s plight over breaking border laws. From a tearful video call with the imprisoned mother to Gabriela’s fearful reaction to the officer, we’re supposed to be shocked and dismayed at the law enforcement that led us here.

At one point, Gabriela even asks Detective Amanda Rollins (Kelli Giddish), “Why la migra [Immigration] take her, Miss Amanda?” Amanda responds, “Because when your mother crossed the border, she broke the laws of our country.” “But what did I do?” the poor little dear questions sadly. All Amanda can answer is, “You didn't do anything wrong, sweetie.”

She did nothing wrong, but her mother did. Not once in the episode does anyone stop to think Gabriela wouldn’t have been separated from her mother had they stayed in Guatemala or applied legally for citizenship. We’re simply supposed to accept them coming because of gang wars in their home country and wag our fingers at anyone daring to enforce border policy.

That mindset is even more prominently displayed when the legality of Olivia’s arrest makes it to court. ADA Peter Stone (Philip Winchester) argues on behalf of Olivia and Gabriela, though he doesn’t gain much ground over the Department of Justice attorney. Even in a courtroom, Olivia can’t help but shout her platitudes.

Stone: Kidnapping is defined by forcibly depriving a person of her freedom by holding her against her will. It is beyond dispute the Refugee Officer Phelps did precisely that to Gabriela Sosa.

DOJ: As the government does to millions of prisoners every day.

Stone: Gabriela was not a prisoner. She's a nine-year-old child who did nothing wrong.

DOJ: Except enter this country illegally with her mother.

Judge: Do you concede that fact, Mr. Stone?

Stone: For the purpose of this argument, I would. But that doesn't give the government the right to forcibly separate her from her parents.

DOJ: Flores V. Reno says we can't keep them together.

Stone: No, it says we can't incarcerate them together. And the state of New York criminalizes transporting that child here against her will.

DOJ: These acts were done under the color of federal law.

Stone: Not law, Your Honor. But a DOJ policy directive known as Zero Tolerance.

Judge: Either way, it's clear the petitioner was acting in good faith.

Stone: That doesn't relieve him of his criminal liability for the ongoing abduction of this girl here in New York.

DOJ: I would remind Mr. Stone of the supremacy clause in article six of the Constitution. –

Olivia: Okay, Your Honor, what are we doing here? We're talking about a nine-year-old child.

Judge: You are out of order, Lieutenant Benson.

Olivia: The government ripped this little girl out of her mother's arms. Somebody, somewhere needs to stop this!

Despite Olivia’s efforts, the judge overrules her arrest. At least someone supports the rule of law.

Fortunately for Gabriela, Stone is able to use his connections with a district judge to save her and her mother by granting them asylum, reuniting the family at last. Still, this act itself is questionable enough to lead to a rather conflicting conversation at the precinct.

Carisi: That's why anybody wants to come to this country to work for the American Dream, they should be allowed to do that.

Fin: Really? I mean, political asylum, that's okay. But just because Maria's neighbor got shot by a gang? That doesn't qualify.

Rollins: I don't know, Fin. What that woman had to go through to get to the border, she must have been terrorized.

Fin: And who takes care of them once they get here? I mean, separating kids from their parents, that's barbaric. But there's still a problem.

Carisi: I think immigrants can take care of themselves. My great grandfather came to this country from Torino when he was 12 years old.

Fin: And I bet you he didn't have public housing, food stamps, and Medicaid.

Rollins: Most of these people, they get jobs. And they're jobs that Americans don't want.

Carisi: "Give us your tired, your poor, your huddled masses yearning to breathe free."

Fin: Yeah, and that's a great poem, but it's all garbage. My people came here 300 years ago in chains, and I still can't breathe free.

Of course, the only slightly nuanced perspective of the episode is muddled by racial politics. And with the ending showing Gabriela and her mother reunited among dozens of detained children with no parents in sight, we end our liberal parable.

As Fin (Ice-T) eloquently puts it, "Welcome to America 2018." Don’t forget to tweet #SVUWithoutBorders, too!

We are not voiceless. We are not helpless. When we move in solidarity with those unjustly treated, when we stand up for what we believe in, when we vote, when we show up, when we follow our hearts, we can make positive, necessary change. This is not over. #SVUWithoutBorders

What the episode neglects to mention is that reports indicate that the Obama administration prosecuted approximately 500,000 illegal immigrants and separated families upon prosecution. In fact, first-hand accounts describe Obama-era detainment centers with expired food, little clean water, and a lack of medical care stating, “It was no place for human beings, let alone for families with small children.” The final shot of the episode even mirrors images shown from a 2015 facility. Whatever is happening at the border is miserable, but it has been happening for years, not just under Trump administration and not just in 2018.

Even worse, this disregard for border security and detainment only leads to more children being displaced and abused. According to Department of Homeland Security (DHS) Secretary Kristjen Nielsen, up to 10,000 children crossed the border with someone other than their parents, more likely than not a smuggler. This year alone illegal immigrants have falsely claimed children as their own more than 400 times. The laws in place are actually one of the many ways to ensure that children like Gabriela don't end up in sex trafficking gangs. Although President Trump signed an executive order on June 21 to prevent separations, it looks like he's still to blame for ripping children from parents.

This isn't the first time SVU has highlighted the plight of illegal immigrants, but it may be the most heavy-handed time I've ever seen. The dialogue could be interchanged with MSNBC talking points at any moment, and there's absolutely no respect for the U.S. border. We've already hit peak liberal madness in the third episode this season. Hopefully, it doesn't get any worse from here.