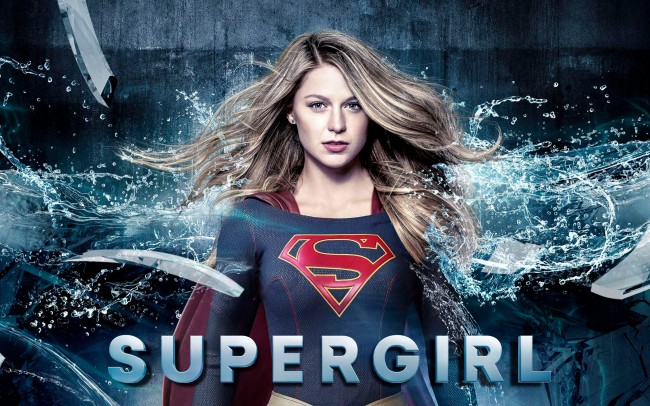 Could the CW’s series about the bulletproof hero Supergirl really be dense enough to do another episode against guns? Not only is it that dumb, but the show takes the gun control rhetoric to a new super-dumb level in their hunt for a potential mass shooter.

The June 4 episode “Not Kansas” has a criminal getting his hands on what is described as a “DEO assault rifle” with capabilities equal to those issued to the secret government organization DEO. Since the gun was manufactured for government use, DEO head and secret alien J’onn Jonnz (David Heywood) and secret vigilante James Olsen (Mechad Brooks) investigate the gun manufacturer in an attempt to find the gunman who shot a police officer.

J’onn: Thank you for seeing us, Mr. President, we won't take up too much of your time. We just have a few questions.

President: No problem. Contract with your division of the FBI is one of our most important.

J’onn: Have there been any missing shipments of weapons? Uh... Anything from your factories?

James: Well, the suspect, um, used a weapon identical to one of Director J'onzz's assault rifles and used it to shoot at a police officer.

President: Is the officer all right?

James: He will be.

President: That's a relief. Well, as for theories, the criminal may have purchased one of our Heel-14 rifles and modified it with a bump stock.

President: We designed a civilian version of the assault rifle we produced for you. Not to worry, it's perfectly legal and in line with our contract. It's a hunting rifle.

J’onn: That is not a hunting rifle. Someone used a weapon we designed and used it against a police officer.

President: And that is not your fault any more than it's mine.

James: Yeah, but you can do something about it. You can stop selling that weapon.

President: I have 2,000 employees to pay. Taking any of our products off the market hurts every one of them. This is a family business, and our guns bring families together. I remember when my grandpa gave me my first hunting rifle and taught me how to shoot. It was an inter-generational experience. And it's my hope to help as many Americans as possible capture that feeling and pass it on to their children.

J’onn: No one values families more than I do, but that is not for families. That is for military personnel, trained officers, law enforcement. All right, here's what's gonna happen right now. You are gonna hand over all documentation relating to the Heel-14, and you're gonna comply completely, 100% with our investigation. If you do not, we'll take our business elsewhere.

President: Of course, I'll comply. I wouldn't dream of standing in the way of your investigation.

James: Oh, you just dream of a world where everybody's armed to the teeth, right?

President: And you dream of a world where every person reads CatCo magazine. We're both businessmen, Mr. Olsen.

In just this one scene, they quickly jump from discussing the weapon used to blaming gun manufacturers and their greed for shootings. We’re supposed to watch TV shows like this to get away from news, but it already feels like a segment on MSNBC.

From there, it quickly turns into a thinly-veiled puff piece for gun control, if that scene wasn’t enough already. James continues the search for the shooter, lamenting how difficult it is without a registry. The episode has some sense to have Lena (Katie McGrath), who is dating James, remark that she herself carries a gun for self-defense and mistrusts government surveillance, but it unfortunately goes no further than “agree to disagree” since he can’t understand how “someone's right to own an assault weapon is more important than someone's right to go to school safely." So far, I’m surprised this episode wasn’t written by the DNC for their midterm election platform.

But wait, there’s more! The DEO manages to track down the shooter as a disgruntled employee who somehow passed a background check and acquired his weapons from a gun show (of course). Now, he plans to shoot up his place of work after they fired him. To prevent a further tragedy, J’onn approaches the man unarmed and proceeds to talk down the shooter by disparaging the gun he is holding - and apparently it works!

Arthur: Who are you?

J’onn: Just someone who wants to talk.

Arthur: Yeah, well, it's too late for that now. No one wanted to listen to me before, but they are gonna listen to me now. This is the only way for me to be heard.

J’onn: Arthur, if you pull that trigger, no one's gonna listen to a thing you have to say.

Arthur: They took everything from me! My wife left me because I was always working, then they just kept passing me over for partner. They lied to me!

J’onn: Look, I know you feel like they took everything from you, like you got nothing left. Trust me, I know how it feels to lose everything.

Arthur: They never respected me.

J’onn: You think that gun gives you respect? It has no power. It's just a tool for spreading fear, and fear is not respect. Look, Arthur, I know you've been bullied, but that doesn't give you the right to bully back. You got something loud and ugly there. You think that's gonna make people hear you?

Arthur: I shot at a cop! My life is over no matter what.

J’onn: Your life doesn't have to end like this. You can go on, you can change, you can... You can begin something new... If you just put down that gun.

Arthur: I need it.

But wait, there’s more! After averting a disaster, J’onn announces to the DEO that they will be, and I’m being serious, “phasing out the use of weapons of lethal force.” In other words, an FBI-like government organization plans to destroy all their guns and replace them with “non-lethal weapons” to use in the field against bad guys carrying whatever lethal weapon, legal or illegal, they can get their hands on. Yeah, that'll work.

Perhaps the 500,000 to 3 million citizens a year who use guns for defensive purposes could explain their value to the DEO.

With the midterms coming up, I guess it’s time for Hollywood to double down on their ridiculous gun control agenda, although, I’m not sure this laughably awful episode helps. Unless the goal was more ammo for gun rights activists, Supergirl once again fails on a supreme level.