Bulletproof Supergirl Lectures 'Guns are Bad No Matter Who Controls Them' 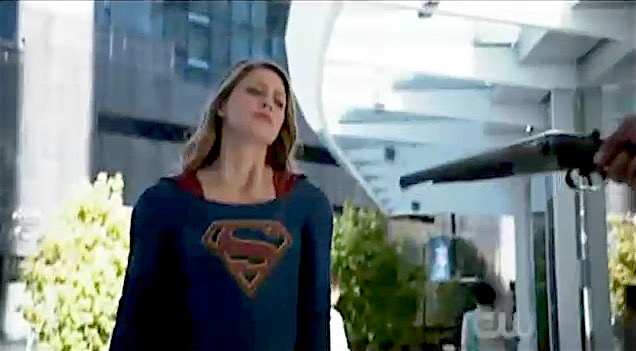 After butchering the issue of illegal immigration in previous episodes, CW's Supergirl apparently felt it was ready to take on gun control in the latest episode “Crossfire.” This week the argument is about as substantial as another election TV spot.

After a gang attacks National City armed with alien weapons supplied by a secret organization known as Cadmus, people rightly question what they can do to protect themselves. When the suggestion to arm the populace is thrown out, Supergirl/Kara (Melissa Benoist) simply responds, “Alien guns are bad no matter who controls them,” sounding like every other vapid Hollywood lefty who thinks all guns are bad simply for existing. Yes, because we can clearly see it was the alien guns alone that pulled their own triggers and blasted a children’s hospital, not the evil men holding them.

Assuming alien ray guns are protected by the Second Amendment, Kara's argument in opposition boils down to “that’s what Cadmus wants,” since people apparently never normally want to defend themselves, it’s just a massive evil scheme. To Kara, guns are not the solution, it's all about people not being afraid and trusting each other. Easy for her to say.

Female reporter on TV: In another case of humans using alien weaponry, the National City Children's Hospital has been damaged.

Man: I don't know about the rest of you, but I sure as hell would feel a lot safer if I had one of those super-powered weapons on me to defend myself.

Kara: That's not the solution.

Man: Well then, what is? The bad guys are running around everywhere with these high-tech weapons. I just think it's about time the good guys got some of our own.

Kara: Alien guns are bad no matter who controls them.

Man: The Second Amendment gives us the right to bear arms. Even if those arms are ray guns.

Kara: That's what Cadmus wants. They're the ones handing out these weapons. They want us to be afraid of each other. To not trust each other anymore.

Man: Well how do you know what Cadmus wants?

James: Okay, guys, that's enough. We all know our assignments. We've got a magazine to put out. Let's get it together.

Honestly, this self-defense argument becomes even worse considering the person lecturing to us against self-protection with weapons is the one person on the planet who wouldn’t be threatened by a weapon anyway: Supergirl. It’s like the body-guarded gun-control activist wearing a cape, the Hypocrisy of Steel. In a city that is hassled by alien threats weekly, owning a weapon for self-defense should be a no-brainer. And if amnesty can apply to aliens, I think alien guns can apply to the Second Amendment.