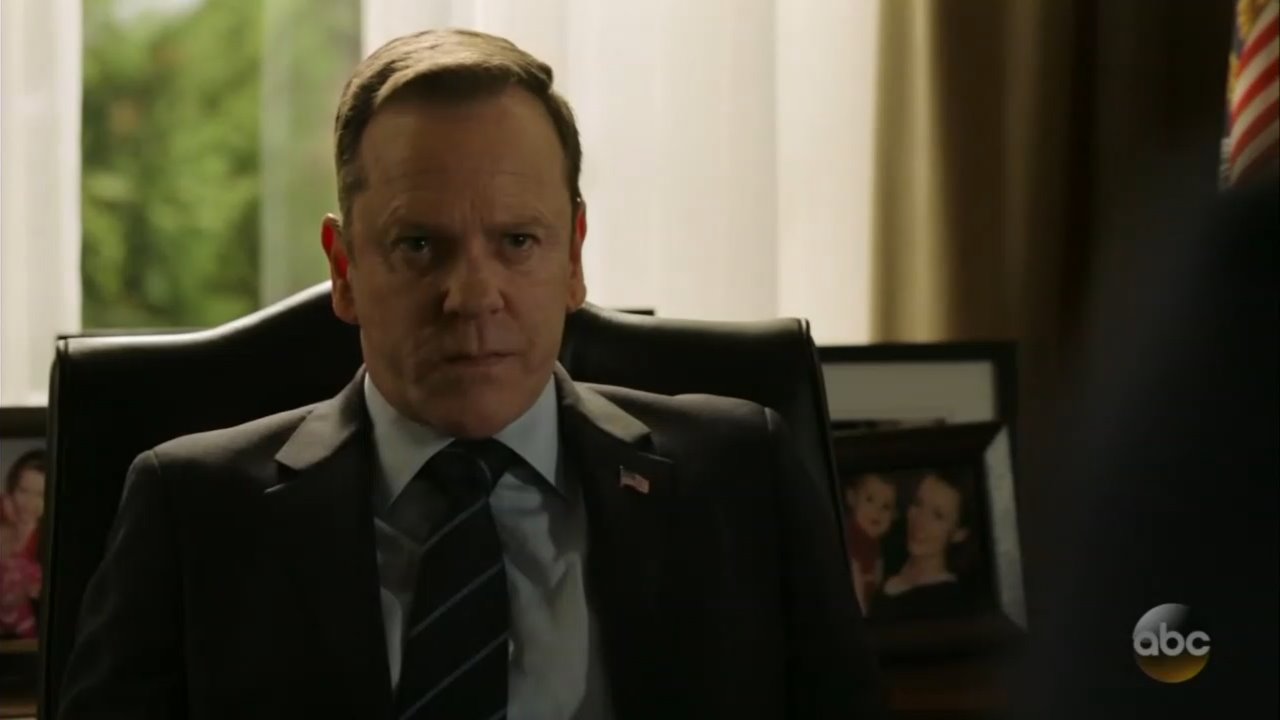 Yes, it's happening again for the third time this week: ABC’s Designated Survivor joined the growing number of shows focusing on ousting a president from office. Ladies and gentlemen, I think we have a trend.

The April 18 episode “Kirkman Agonistes” follows the public leak of audio notes from President Tom Kirkman’s (Kiefer Sutherland) private therapy sessions after the death of his wife. Because of the leaks, the press and even D.C. bureaucrats begin questioning Kirkman’s fitness to lead the nation.

Even though the therapist's tapes are months old and not reflective of Kirkman’s abilities as President, his cabinet and Vice President Darby quickly move to assert the 25th Amendment:

Kirkman: What do you mean the Cabinet voted to have me removed?

Darby: The majority of the Cabinet, sir. They're invoking the 25th Amendment, Section IV.

Kendra: Which allows the President to be ousted on the basis of –

Kirkman: Mental incapacity, I know. What evidence do you have of this? Some illegally obtained recordings from my therapist, which no one should've heard?

Darby: But we have heard them, sir. And they raise justifiable concerns about your decision-making since your wife's death.

Kirkman: My decision-making? Correct me if I'm wrong, but you were standing right next to me in Command Ops when you said my decision to send the Navy seals into Kanami was the right one! This is ridiculous!

Darby: We have drafted a letter to Congress. Upon its delivery, you will be removed from office.

Kirkman: And then you will become president.

Kirkman: Then why in the hell are we even having this discussion?

Emily: You haven't signed the letter yet, have you, ma'am?

Emily: And the Cabinet's vote remains unratified until you do.

Darby: Yes. I wanted to speak to you first.

Kirkman: The time to speak to me was before the Cabinet convened. And you damn well know it.

Darby: I could not do that, sir. The process demands secrecy.

Kirkman: Once it's in motion, yes. But not before. You, my vice president, had every opportunity to express her concerns to me before you orchestrated this crap.

Darby: I understand that you're upset.

Kirkman: You do, do you?

Darby: Yes, sir. I do. And in all fairness, I think you deserve the opportunity to present your case as to why you should be retained. If you choose not to do so... I will proceed as planned.

Unfortunately for us, the plot did not end with this episode. An inquiry has been set with an attorney named Ethan West (Michael J. Fox) arguing for his inability to serve. For his part, Kirkman soon said he holds no hard feelings against his Cabinet members, even acknowledging to his Vice President that she did what she “thought was right.” See? There’s nothing wrong with a coup of a democratically-elected leader!

It’s strange how many times this particular amendment has been invoked on television recently when I doubt many could reference its number eighteen months ago. Now, just since January, we’ve seen it discussed on Madam Secretary, Homeland, and Designated Survivor. One show, The Good Fight, even goes so far as to jump to talking about actual impeachment. I’m starting to feel like they want to tell us something.

But that part’s obvious. Ousting a president has become the new hot topic. President Kirkman and President Trump have almost nothing in common, yet Kirkman, our hero, needs to be dragged through the mud as “mentally unfit” following the death of his wife to make a statement. When will Hollywood learn that the only place the 25th Amendment will get a workout is on the small screen? Until liberals can see the real thing, they will deliver the same type of story again and again, hoping reality will catch up with them. We are far from the end of this line.