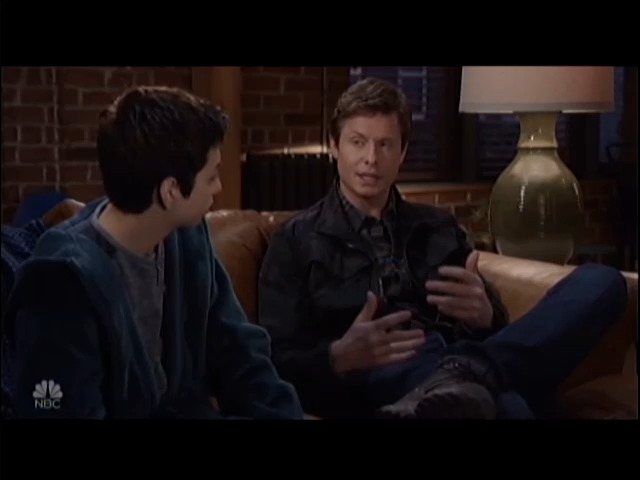 NBC’s new comedy Champions already had a swing and a miss regarding feminism. Now it’s back trying to deal with the topic of diversity. And by talking about diversity, I am of course referring to the shaming of white people. Unfortunately to some liberals, that’s the same thing.

The April 12 episode “Vincemas” has Vince (Anders Holm) and his brother Matthew (Andy Favreau) planning for their annual camping trip until they learn that Vince’s son Michael (J. J. Totah) is having trouble making friends at his new school. At both Vince and Matthew’s advice, Michael reaches out to one group during lunch to boost his image. The first group that accepts Michael just happens to be the Indian students club who welcome him due to his half-Indian heritage. However, Vince encourages his son to try and expand his social circle beyond “the Indian kids.”

That’s where Vince makes his fatal mistake. The Indian Students club quickly convince Michael that his father is being “culturally insensitive” for denying his Indian heritage and only doing white things like eating turkey burgers, giving thumbs-up, and going camping. To try to make up for his ignorance, Vince goes to his employees for advice, only to be told more or less the same thing.

Britney: Wearing the same jeans for too long between washes? We've all noticed.

Vince: He said I was culturally insensitive. That's crazy, right?

Shabaz: [Laughter] Well, you did spend my entire first week here trying to figure out if I was Muslim or not.

Vince: No, I didn't. What? No. I wanted to know why you didn't eat bacon. You know, I love Muslims. It's the vegetarians I don't trust.

Bud: Look, truth be told, when I wanted to take Columbus Day off to celebrate my Italian roots, you--you laughed right in my face.

Vince: Come on, in New York, Italian's not an ethnicity. It's, like, normal.

Britney: You just called Italian normal, like everyone else isn't normal. Am I not normal, Vince?

Vince: Okay, look, guys, I just wanted him to have the best time possible in high school, like I did. Now he's really upset, so... maybe I should just cancel the camping trip.

Ruby: No one's calling you a racist. They're just saying you're being insensitive, like a--like a patriotic grandparent.

Britney: I mean, we dated. Would a racist person date me? Or Michael's mother, Priya? You're not racist; you're a fetishist.

Ruby: Shabaz, do you have anything encouraging to say?

Shabaz: Look. All white guys are a little bit insensitive. But it's not your fault. You've been brainwashed by the white-run media. And it's not just them. It's the government; it's school systems. In some ways, you're the real victim.

Bud: You get it, Shabaz.

There you have it, white people. We are all insensitive, because somehow the liberal media is brainwashing us to be that way, and there is apparently nothing we can do about it. If only we didn’t commit the mortal sin of being born with less melanin in our skin, then we wouldn’t need to be constantly reminded how awful we are. Alas, that’s the bulk of most “comedy” these days.