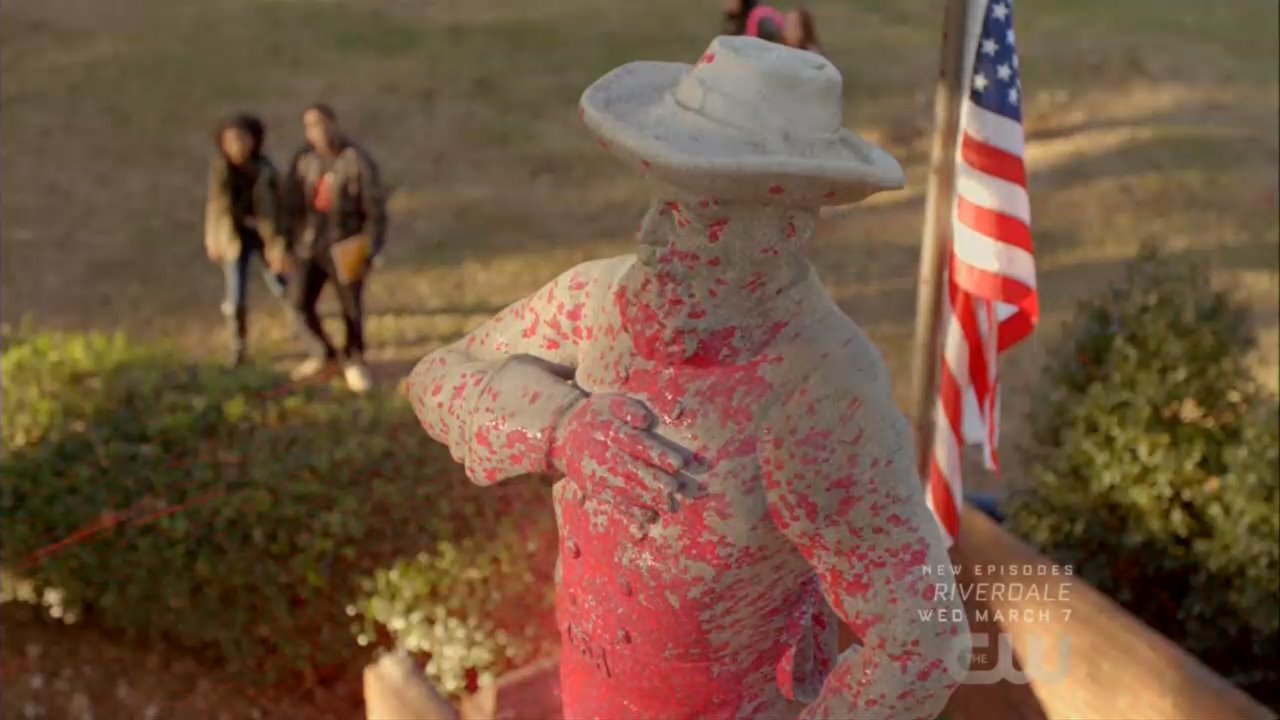 CW’s Black Lightning has made headlines for delivering the first black superhero on primetime and providing liberals another opportunity to virtue signal how progressive they are for watching one hour of television. The February 27 episode takes both of those elements up a notch with a direct rip-off of the Charlottesville protests.

The episode “Three Sevens: The Book of Thunder” continues the story of Jefferson Pierce (Cress Williams) returning to his mantle as the superhero Black Lightning. Unbeknownst to him, his eldest daughter Anissa (Nafessa Williams) has developed abilities of her own, and she’s already developed a social justice warrior attitude.

Previously, her acts of protest or vigilantism mostly revolved around gang violence and illegal trafficking, otherwise known as things people really worry about that should be stopped. Not content with those problems, however, the show finally addresses what it considers just as serious a topic: Confederate statues.

In fact, Anissa’s plot in the episode opens with her and a group defacing a statue dedicated to a former Confederate soldier only to be confronted rather violently by the police.

When bailing his daughter out of prison, Jefferson offers less-than-stellar words of wisdom. Instead of maybe suggesting that protesting statues isn’t worth being arrested over, he plays the race card noting, “All it takes is for one cop - one cop to see your color instead of your humanity and decide ‘better dead than sorry’” and how, as a black woman, she doesn’t have “the luxury of being naïve.”

Even if we bought the idea that cops are hunting down African Americans for the crime of being black (which they clearly aren’t), it’s worth addressing that most Americans aren’t on Anissa’s side when it comes to Confederate monuments. With that in mind, this entire plot becomes not only sanctimonious but blind.

The story unfortunately doesn’t end there. Almost immediately, the protest against the statue leads into a counter-protest with some previously unheard-of white nationalists. The rest of the story becomes shockingly familiar to those who kept track of the Charlottesville protests.

Reporter: This counter-protest began calling for the preservation of all history, but was hijacked by white nationalists. It turned violent, then tragically, a white nationalist drove his car into a crowd of students, killing 19-year-old Katie Smith.

Woman: What, did you know her?

Anissa: [Sighs] Not really, but I knew her.

Woman: So sad. I just... I don't know. Makes you wish there was something you can do to stop this madness.

This whole plot seems to serve as a perverse window in the mind of leftists. While most people don’t care about Confederate statues, they see it as an issue akin to gang violence. The very real death of a woman is now suddenly exploited as a lazy, throwaway plot opportunity for a tv show. That blatant form of moral postulating is almost more damning than anything I could write.

The most obvious example of this comes from Anissa suiting up in public to destroy the statue herself. I’m sure to the writers this scene comes off as powerful and deeply moving, bless their hearts. Out here in the real world, it comes off as a resolution no one beyond the most dedicated leftist cares about and most certainly won’t matter come next week’s episode. Unless destroying that statue brought an end to gang violence or drug trafficking, I dare the show to prove me wrong.

Actually, I dare the show not to prove me wrong. In an average episode, Black Lightning usually plays out like any other CW superhero show, just with an African American lead. Just let people enjoy their needless melodrama in peace.