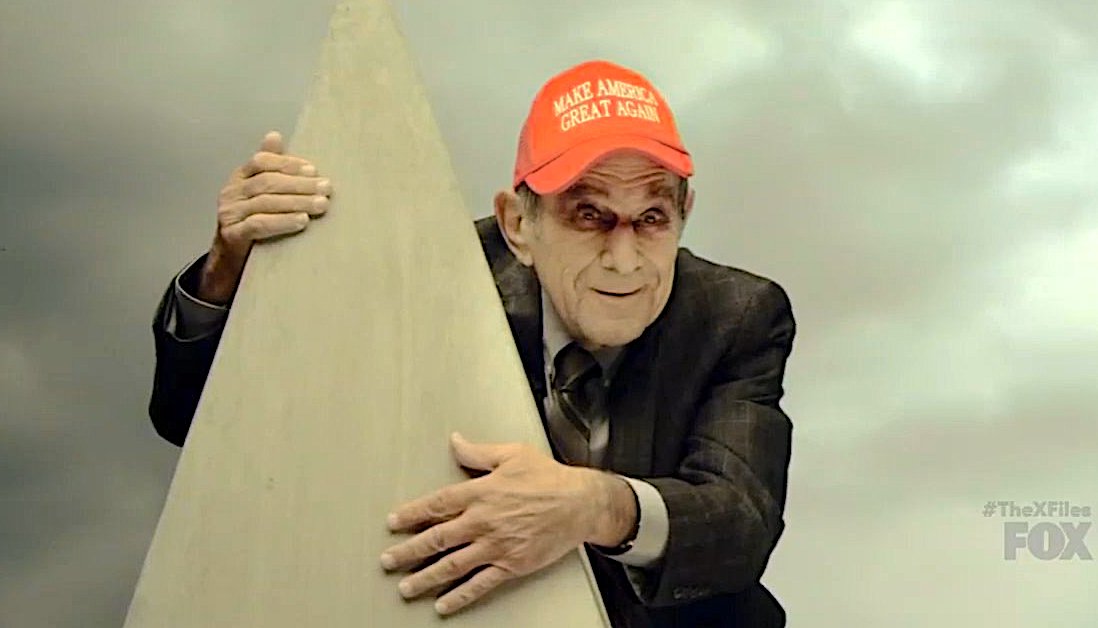 Fox’s The X-Files has been working overtime on their anti-Trump agenda this season, but they’ve truly outdone themselves with this latest episode. In a fictional world full of conspiracy theories - even parallel universes - where people seem to reject objective truth, one thing never changes: Donald Trump must be mocked at all costs.

The January 24 episode “The Lost Art of Forehead Sweat” kicks off with a mysterious man named Reggie (Brian Huskey) who claims to know FBI Agent Fox Mulder (David Duchovny) despite the latter not remembering him at all. After Reggie perfectly recalls Mulder's memory of the first episode of The Twilight Zone he saw as a boy, an episode that does not actually exist, and gives Scully a box of gelatin she remembered but was told by others didn't exist, both Mulder and Agent Dana Scully (Gillian Anderson) begin questioning their collective memories of the past and exploring a phenomenon known as the Mandela Effect.

It turns out there may be a reason for these memory discrepancies besides a parallel universe or people just being, you know, wrong - Reggie tells them about a dubious character known as Dr. They (Stuart Margolin) who is an expert in memory manipulation of the masses. They watch a "phony fake news" video about him - phony fake news, Dr. They explains, is "a presentation of real facts, but in a way that assures no one will believe any of it" - and of course the curious case of President Trump's inauguration crowd size is brought up, because the left still cares about that.

Narrator: This is the story of a man named They. Dr. Thaddeus Q. They, a neuroscientist who has discovered a way to manipulate collective memory. Most people have never heard of him, or rather, they have, but he has manipulated their memories to make them forget that they ever have. While working on NASA's top secret Operation Soy Bomb, involving future, one-way space flights beyond our realm, Dr. They devised a technique to change specific memories, which would allow astronauts to complete their mission without being weighed down by thoughts of life back on Earth. However, Dr. They was fired for also making the astronauts think that they were chimpanzees. He perfected his research while at the U.S. University hospital in Grenada, and now applies his method for a number of unknown, mysterious clients. His memory manipulations have run the gamut from Holocaust denial to corporate product recognition to making people forget he, himself, once starred as an irrepressible genie in a movie called Ka-blaam! Dr. They has not been heard of for many years, but rumors swirled that he was at the last presidential inauguration, where, amongst the hundreds of millions who attended, he was seen occupying the last remaining seat available. And as to his motivations for being there, and what exactly he is up to now, we have no way of knowing. Or perhaps we once did, but have since been made to forget.

Moving on, Reggie becomes more concerned about their memory loss as he reveals in true Twilight Zone-fashion that he was the one who created the X-Files in the first place and there are flashbacks of him being present in every major milestone in the series.

After learning about this potential mind manipulator, Dr. They, Mulder and Scully try to connect the dots and we are treated to a scene of Mulder puzzling over a bulletin board, pointing at a picture of Senator Ted Cruz and mumbling to himself, "So this moron's father is somehow connected there," indicating a picture of President John F. Kennedy - alluding to the conspiracy theory recklessly promoted by Trump that Ted Cruz's father, Rafael, was somehow involved in the plot to assassinate JFK. They also fit in a birther mention, another Trump-repeated conspiracy theory. 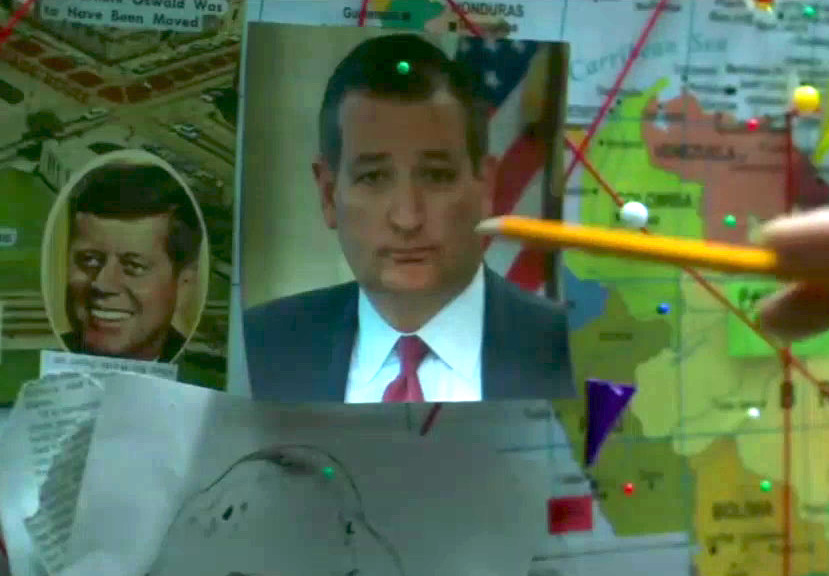 Mulder: So this moron's father is somehow connected there. Reggie...(Muttering indistinctly) to Bob Dylan, whose '98 Grammy performance is remembered by millions because a half naked man with the words "Soy bomb" written on his chest jumped onstage and started dancing like a spaz. But no official video of the incident exists. Did it even happen? Seven years later, the band Eels releases a song, "Whatever Happened to Soy Bomb?" A coded message? Especially because the band's lead singer, the son of Hugh Everett III, who originated the many-worlds interpretation of quantum physics-- and I'm right back to parallel universes again. It's true, Scully, I've lost the plot. I can't find the hidden connections between things anymore. The world has become too crazy for even my conspiratorial powers.

Scully: Maybe you've just lost your taste for it, especially after all this "Birther" stuff.

Eventually, Mulder meets personally with Dr. They who tells him the world is in a “post-cover up, post-conspiracy age” where no one cares about the truth or even knows what it means anymore. Apparently, even in The X-Files world, the greatest enemy is not a malevolent extraterrestrial but any blogger on the Internet because people are stupid and will believe anything to the point of electing Trump as president.

Mulder: As long as the truth gets out...

They: They don't really care whether the truth gets out, because the public no longer knows what's meant by "the truth."

Mulder: What do you mean?

They: Well, I mean, no one can tell the difference anymore between what's real and what's fake.

They: So what? I mean, you take this Mandela Effect. Well, in the old days, I would never have come out and admitted to you that, yes, I can change people's collective memories. And that would have meant that I could control the past. And if that's true-- well, as Orson Welles once said, "He who controls the past, controls the future."

Mulder: It was George Orwell that said that.

They: Well, for now maybe. Anyway, the point is, I can tell you all of this, right out in the open, because it doesn't matter who knows about it. They won't know whether to believe it or not.

Mulder: To be honest, I'm not believing any of this.

They: Well, believe what you want to believe-- that's what everybody does nowadays anyway. You're only proving my point, you twit. But, full disclosure, you're right. I can't control people's minds. Although it turns out you don't really have to. All you need is some people to think it's possible. And then you've sown the seeds of uncertainty. All you really need is a laptop.

Mulder: So that's what this has all been about? The spread of online disinformation?

They: Maybe. You know, our current president once said something truly profound. He said, "Nobody knows for sure."

Mulder: What was he referring to?

They: What does it matter?

But the real low point of the episode, the part that is truly unmatched in its stupidity, comes near the end. After find out that Reggie has escaped from a mental institution, Mulder and Scully nevertheless let him describe “their” last X-File together. In Reggie’s depiction of an X-Files finale, the three come across an alien who gives the rundown on Earth’s status in the universe. After a while, the alien begins to sound oddly familiar.

Alien: I come before you as a representative of the Intergalactic Union of Sentient Beings from All Known Universes and Beyond. We have been observing your species for many, what you call, "Years." Our study is now complete. We no longer wish to have any further contact with you. We have returned your music sampler but will no longer tolerate any further efforts on your part to venture beyond your realm. We are building a wall. It will be a beautiful, albeit invisible, electromagnetic wall that will subatomically incinerate any probes you attempt to send beyond your solar system. You're free to explore Uranus all you want. But we can't allow your kind to infiltrate the rest of the cosmos. You're not sending us your best people. You're bringing drugs. You're bringing crime. You're rapists. And some, I assume, are good people, but we have no choice. Believe me. For although the rest of the galaxies all have their share of these same problems, we fear you could infect us with the one trait that is unique to Earthlings. You lie. To show there are no hard feelings, we've compiled a compendium of answers to any questions you might still have regarding... Anything. Good luck, and good riddance.

It's set up just like a Twilight Zone episode with a strange situation (collective memory alteration) and an alien appearing at the very end of the episode. But instead of using it to push a theme or a profound message like the Twilight Zone usually would, they use it as a platform to mock Trump and bemoan a "post-truth" society.

It’s this precise scene that just proves their full-blown Trump Derangement Syndrome. The world has given up on truth since Trump. Everything Trump does must be mocked even if it has nothing to do with the plot. We cannot go even one hour without being told how bad Republicans are or that Trump is connected to the Russians.

It’s at this point I have to ask, why? Why create an entire scene that’s meant for nothing but mocking Trump and the wall? Why needlessly bend over backwards to mock ideas held by half of the nation? And most importantly, why do you have to drag The Twilight Zone, one of my favorite shows, down with you?

But we already know the answer to those questions. It’s because they’re liberals and don’t care what comes between them and promoting their agenda, even if beloved television series get dragged in the process.