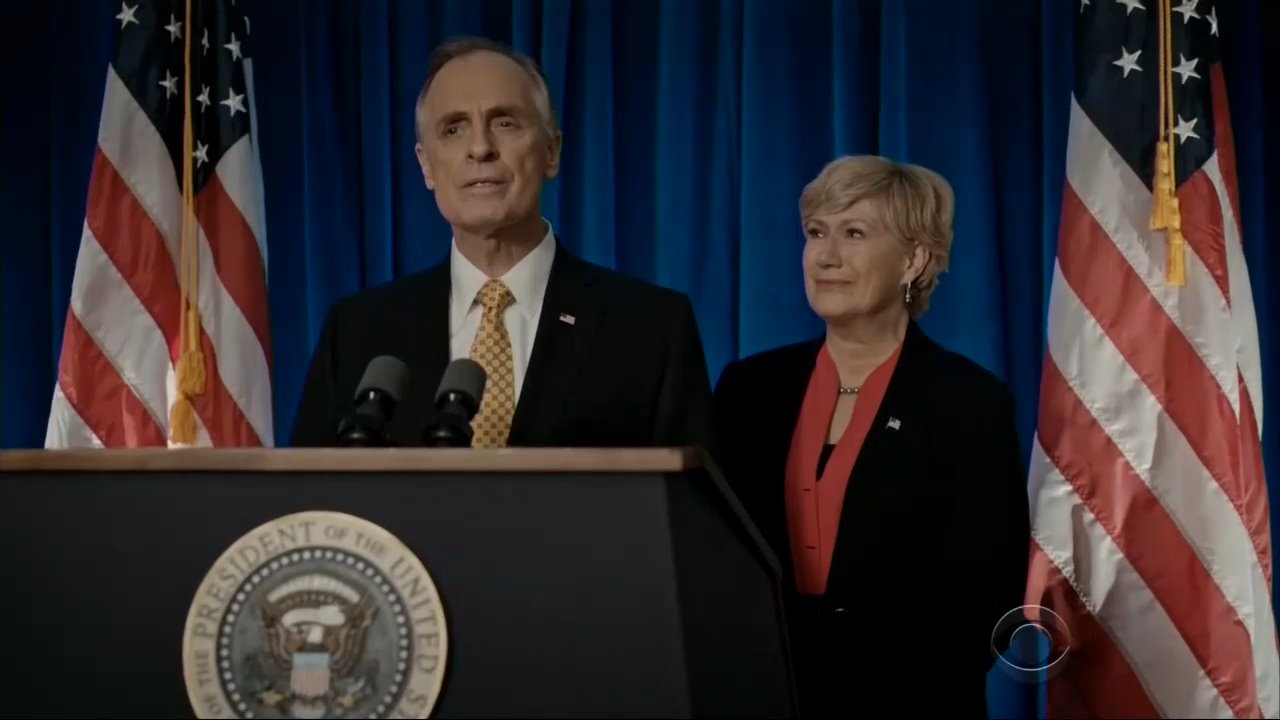 It's finally happened! The 25th Amendment has been invoked and an unstable president removed from the White House! Unfortunately for liberals, however, that fantasy only occurred in the world of CBS's Madam Secretary which showed a newfound respect for our founders and Constitution.

The January 14 episode “Sound and Fury” surrounds what appears to be a sonic attack on a U.S. embassy by the Russians. But, without any solid evidence on the people behind the blast, President Dalton (Keith Carradine) makes an uncharacteristically brash move to threaten Russia with “the overwhelming force and ferocity of our military might.” The “force and ferocity” rhetoric, which sounds eerily similar to Trump’s “fire and fury” threat to North Korea, only ramps up higher when Dalton openly fires White House personnel who refuse to act on his aggressive orders against Russia.

What is Secretary of State Elizabeth McCord (Téa Leoni) to do in such a familiar situation? Why, take part in a secret coup, naturally! She and White House Chief of Staff Russell Jackson (Željko Ivanek) hold a meeting with other cabinet members to discuss the unwell state of the president. Once that starts, it only takes one short speech before the show jumps into invoking the 25th Amendment.

Russell: I've talked to White House Counsel and the attorney general, and though there is a "fog of law" surrounding Section 4 of the 25th Amendment, because it's never been invoked, they assured me that if the heads of the executive departments plus the vice president vote by simple majority, the president will be removed from office, and Vice President Hurst will become the acting president. Acting secretaries can't vote, so that eliminates Bob here. Leaving 15 of you, including the VP. If ever there were a time to set aside politics and do what's best for the country, this is it.

Bob: Russell has asked me to provide some context for this. Um, in two hours, President Dalton will enter the Situation Room, and I will execute his order. Nine minutes later, all five Russian Oko satellites will be destroyed. And we will be on a war footing. Unless you alter history here tonight.

Russell: On that cheerful note, we'll leave you to it.

Hurst: There is no playbook for this. And clearly, time is of the essence. So do you want to talk or just vote?

Nolan: Well, as attorney general, I would just like to say that, although I concur with Russell's explanation of the law, I just don't think we've hit the Section 4 threshold yet.

Hurst: Really? A reckless strike against our greatest nuclear adversary doesn't do it for you, Hank?

Nolan: With all due respect, Madam Vice President, but perhaps it's indiscreet for you to weigh in given you're the one with an enormous vested interest in the outcome.

Hurst: My interest is only what is best for the country. But fair enough.

Mary: Speaking of fairness, I mean, who are we to question the president's judgment? Some banana republic? I mean, hell, maybe it is just the right time to hit the Russians. I support the strike and our duly elected president.

Elizabeth: But even if the Russians are cowed, the president is still a wild card. And we will end up going from crisis to crisis, and eventually there'll be disaster.

Make no mistake, it quickly regresses into one big argument in favor of impeaching Donald Trump. I’m especially drawn to the line about “setting aside politics and do what's best for the country,” it sounds like a direct plea to members of Trump's cabinet.

We hear all the same tired arguments about a president’s unfit and mentally ill behavior and the oaths to protect the country rather than the party. Madam Secretary even goes on to label the president as a “wild card” who will have them “going from crisis to crisis, and eventually there'll be disaster.”

The cabinet members successfully remove Dalton from office, placing the female Vice President Teresa Hurst (Jayne Atkinson) into active duty as president. It’s almost a dream come true for liberals! They removed an unstable leader and put a woman in charge. It’s truly the definition of unbelievable, but you know their audience is eating it up.

Of course, since President Dalton is no President Trump, his behavioral change is revealed to be the result of a tumor pressing against his frontal lobe. Once a procedure is done, he will return to his perfectly level-headed self. In fact, Dalton is eager to praise the system that worked to remove him. The episode even ends with a sanctimonious speech calling those who voted to invoke the 25th Amendment the “true American heroes" without whom "our democracy would be lost."

Dalton: Finally, I'd like to pay tribute to the resiliency of our Constitution, a 230-year-old document that has endured the challenges of every stage of our nation's journey. Our government is built on an ingenious foundation of principles and laws, and though the people within that system are fallible, the system itself is devised to withstand anything, even an unfit president. The fact that the system worked as it should proves that our democracy is as strong as ever. I thank the brave cabinet secretaries who voted to invoke the 25th Amendment. They are all true American heroes and patriots. They put their country ahead of their personal relationship with me. That's what separates us from dictatorships and oligarchies. Without people of such courage, our democracy would be lost, and they will forever have my gratitude. And because of them, I have never felt more proud to be an American.

Isn’t it strange how suddenly liberals want to "pay tribute" to the "ingenious" Constitution when it can be used to get rid of politicians they don’t like?

While liberals get their wish of an unfit president removed and the first female president instated by law on fictional television, they’ll have to face reality eventually. Say it with me: President Donald Trump.