On Thursday’s Morning Joe, host Joe Scarborough claimed that anonymous sources “close to” the President “during the campaign” have said that then-candidate Trump was exhibiting symptoms of the “early stages of dementia.” Scarborough and co-host Mika Brzezinski have referred to Trump as being literally insane and therefore dangerous to the United States on innumerable occasions. However, Joe’s comments on Thursday appeared to be the first instance of him claiming to know an inside source who told him that Trump has a specific mental illness.

Morning Joe led the first hour of their broadcast by discussing Trump’s recent series of controversial tweets, including one in which the President called for investigating the death of one of Scarborough’s former female staffers who was found dead in the then-Florida congressman’s office back in 2001. 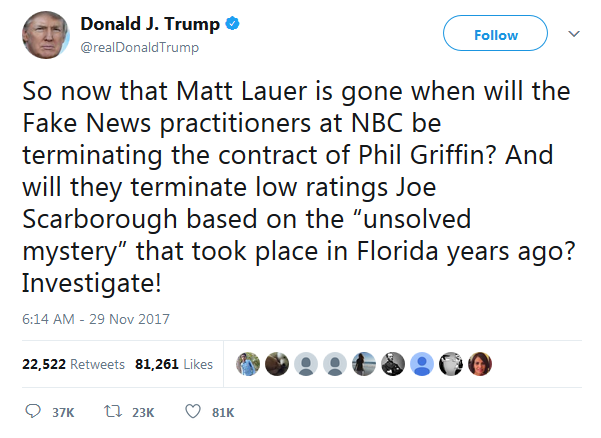 Clearly upset by both the above tweet and Trump’s re-tweets of Britain First leader Jayda Fransen’s anti-Muslim videos yesterday, Scarborough began his long rant against Trump:

SCARBOROUGH: The problem, Mika, is that we are not fine in this country. I said America will be strong. We will survive this. But right now, at this particular moment – and we’re gonna get to this in a minute with Richard Haass – we are headed towards a nuclear showdown. Most insiders say – and Richard has said this for some time, and it matches everything we've heard from inside the administration – we are closer to war on the Korean peninsula than most Americans know. We heard this months ago, that we are going to have a ground war in Korea. They’ve believed that inside the White House for a very long time. And yet, he is completely detached from reality. We had a New York Times and Washington Post piece saying so a couple of days ago. And the question is, Mika: If this is not what the 25th Amendment was drafted for,-

BRZEZINSKI: [finishing Joe’s question] Then what is it drafted for?

BRZEZINSKI: You can say that's not okay to say, but at this point, it’s reality.

Personally, I’d prefer an actual diagnosis from a qualified psychiatrist or psychologist rather than just taking the word of an op-ed from the NY Daily News or some unnamed person who was “close” to Trump before deciding to chuck out the results of a presidential election.

In any case, claiming to have anonymous sources that “know” Trump secretly has dementia or Alzheimer's disease is the kind of garbage that you would expect from sites like the Palmer Report, which has made claims similar to Scarborough’s and has also been repeatedly derided by other left-leaning news outlets like The Washington Post, Vox, Business Insider, and The Atlantic as “peddling conspiracy theories.”

The difference between normal symptoms of aging and dementia are not necessarily easy to distinguish for laymen. Tweeting insensitive, politically incorrect, or even false information is not a sign of dementia or mental illness. If Scarborough wants his assertion to be taken seriously, he or his source should come forward with verifiable, specific information.

Perhaps sensing this, Scarborough ended his rant by desperately calling for somebody in Trump’s cabinet to back up the dementia claim and suggested that Mike Pence should be made President because he is “stable”:

SCARBOROUGH: [talking over Mika] But it is okay to say we -- when are we supposed to say this? After the first nuclear missile goes? Is that when you -- is that when it's proper to bring this up in polite society? Tell me. General Mattis, when is it polite to bring this up in polite society? Rex Tillerson, when is this the right time to talk about a mentally unstable president in the White House and a nuclear showdown with another unstable madman in North Korea? Is it after the first nuclear missiles fly? When exactly is the right time, Steve Mnuchin?

SCARBOROUGH: Everybody. And yet, this continues.

How much time would it really take after Pence was sworn into office before we started to see liberal media outlets say exactly the same sorts of things about him that they now say about Trump?