Trying to Redeem Hillary? Angry Mob Chants 'Lock Her Up' at Innocent Woman on 'Supergirl' 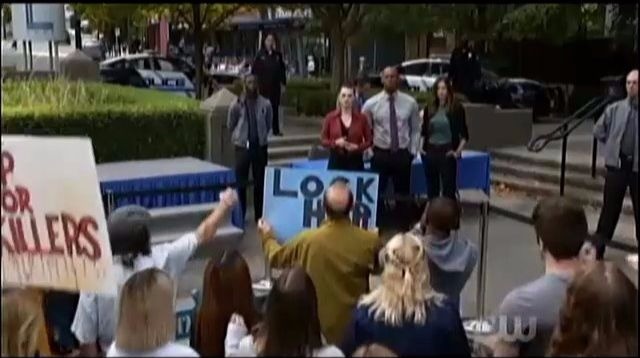 The CW’s Supergirl continues to spiral into liberal idiocy for its third season, and each time it seems to grow more and more idiotic. After insulting a president who doesn’t even exist in their universe, the show has decided to co-opt something else from real life. Say goodbye to any enjoyment from the phrase “lock her up.”

The November 6 episode “Damage” follows Lena Luthor (Katie McGrath) being at the bad end of a developing story when Trump-copy Morgan Edge (Adrian Pasdar) accuses her of poisoning the city with her device from the season two finale.

When children begin suffering from lead poisoning, tensions rise from distressed parents wanting to hold someone accountable to the point where Lena decides to nobly step down from her CEO position while the investigation continues. At the press conference covering the event, Lena is then confronted with a familiar crowd shouting an even more familiar phrase.

Lena: I want your best reporter reporting this. I'm not hiding anything. Set a press conference for later today.

At this point, I’m wondering whether the writers just rip things from the news because they aren’t creative enough to come up with scenes on their own. From what I can parse, they saw it as a good reminder that only loonies with no evidence, trumped up by ideologues, chant “lock her up” at innocent women. Of course, by the end of the episode, Lena is vindicated, even though the same cannot be said for the original “her.”

On some other planet this must evoke some kind of real-world connection, but let’s just say Supergirl should be spending more time on Earth.