Not wanting to be outdone by its fellow DC Comics program Supergirl, CW’s DC’s Legends of Tomorrow has apparently decided to jump on the political train by introducing a new character to their cast: a Muslim hactivist from a dystopian future. If you think that’s a load of political posturing, then you would be right. 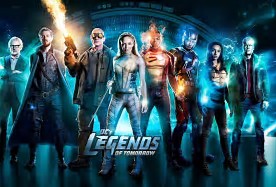 The October 24 episode “Zari” introduces Zari Tomaz (Tala Ashe) a woman from a police state Seattle in the year 2042 who is captured for various crimes in opposition to the anti-meta-human laws. When her life is threatened by a villain from the past, the time-traveling team rescue her in an effort to discover what their enemies are after. In the process, they discover that Zari may have some hidden abilities of her own.

What does that have to do with her being Muslim exactly? Absolutely nothing! But it’s also not nothing according to producer Marc Guggenheim. He previously described creating the character to Entertainment Weekly saying, “You might have heard there was this election. Not to get political, but something we all gravitate toward in the writers’ room was the character being Muslim. That was very important to us not to make a political statement or make it a thing… [because] someone’s race, religion, or sexual orientation is not the only aspect of their character.”

Okay, so we learned that while a religion should not be the most important thing about a character, it’s also something to “gravitate towards” following the election. Only in a leftist mind could you do both of those things at the same time. Of course, those things can only apply when it’s for promoting the "religion of peace" against bigoted President Trump. I can’t even remember the last time someone felt compelled to mention a character was Christian.

Here’s a little fun fact for some non-comic readers. Zari is actually based on a DC Comics character named Adrianna Tomaz, an Egyptian superhero who went by the name…Isis. But I guess TV's first Muslim superhero being named Isis was a little inconvenient for their goal of "[Holding] a mirror up to the year 2017."

Also, it’s interesting enough to note that an Egyptian character alone is apparently not diverse enough for them. We need to be reminded she’s Muslim and oppressed by our society as well. Sorry, Middle East, even you have limits to your political usefulness.

Fortunately for us, the show does not linger too much on her religion in comparison to the action. Unfortunately for us, she is a regular character, so there are still plenty of opportunities to ruin Tuesday nights in the future.