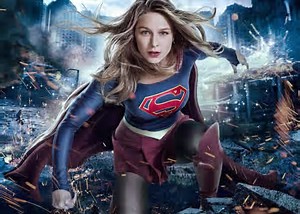 CW’s Supergirl has now had almost five extra months to come to terms with the Trump Presidency. At this point, the show could either move on like the rest of the country or double down in disgrace. Unfortunately, the October 9 premiere “Girl of Steel” doubled down and doesn’t show any signs of letting up its liberal, anti-Trump slant.

Let’s start with the moderate stuff and work our way up the ladder. Since the lackluster season two finale, Cat Grant (Calista Flockhart) became Press Secretary to female President Olivia Marsdin (Lynda Carter), which is sadly not the most unbelievable thing we have to take in this episode. Right off the bat, she answers a question about whether the president believes in climate change.

Cat: Uh, yes. Yes, Carl. As a matter of fact, she does. She also believes that two plus two equals four and the Earth is round because the President is not a moron. Any third grader knows that global warming is the biggest threat of our time. And I'm happy to report that the intellectual capacity of our President is not inferior to that of an eight-year-old. Next question.

If I didn’t know any better, I’d say they wanted to appear on Newsbusters this week. And what does this remark on climate change have to do with the plot? Absolutely nothing. It’s just yet another excuse for the show to remind us how enlightened they are when it comes to “science.” Forgive me for thinking that people who call those who have the slightest doubt about the religion of climatology names are the actual eight-year-olds.

However, that’s nothing compared to the actual plot of the episode which features its own Trump-like villain. Here we meet Morgan Edge (Adrian Pasdar), originally a media mogul in the DC comics, who is now a…real estate mogul. Not just any real estate mogul, mind you, but one that seems to play golf, have sexist behaviors, and make pointed remarks about the media.

Let’s take this scene, for example, after he purchases the magazine company CatCo and is confronted by fellow business owner Lena Luthor (Katie McGrath).

Morgan: Lena, twice in my office in as many days. [Sing-song voice]People are gonna start talking.

Lena: Morgan, you have all the charisma of a Michael Douglas movie from the '90s.

Morgan: You didn’t come all this way just to flatter me, did you?

Lena: I came because I have a proposition.

Lena: Now, you know I don't agree with your waterfront development. But you are still the best developer in National City.

Morgan: Let me get you a drink before that compliment leaves a bad taste in your mouth.

Lena: Your work is why I have invested in your portfolio and why I intend to invest more.

Morgan: Let me guess... You want me to stay away from Catco?

Lena: Oh, come on, Morgan. Catco isn't good business for you and you know it. There's a city out there that needs to be rebuilt. That's what you're good at. Focus on that.

Morgan: You know you can take the Luthor logo off your name, but people still aren't gonna trust you. And that's a really easy sentiment to reinforce once I have Catco's editorial under my control. People love to believe what they read.

Lena: Using Catco to defame your enemies and promote your own agenda. That's despicable.

Lena: I'll see myself out.

If that’s not enough for the show, the episode later reveals him to be personally behind an attack on the city just to boost his new development. I know from experience that Supergirl has been far from subtle when it comes to their social justice issues, but this guy might already be clinching the top liberal bias instance of the third season. The other moments we could have just accepted them and move on, but now we have an evil, capitalist, Trump-like punching bag for several more episodes.

I’m sure the writers feel smug about portraying a Trump figure as the bad guy, but the downside is that real life doesn’t work that way. The moment the episode is done Trump will still be president, and he will be president for long after this season ends. With propaganda like this, you can count on it.