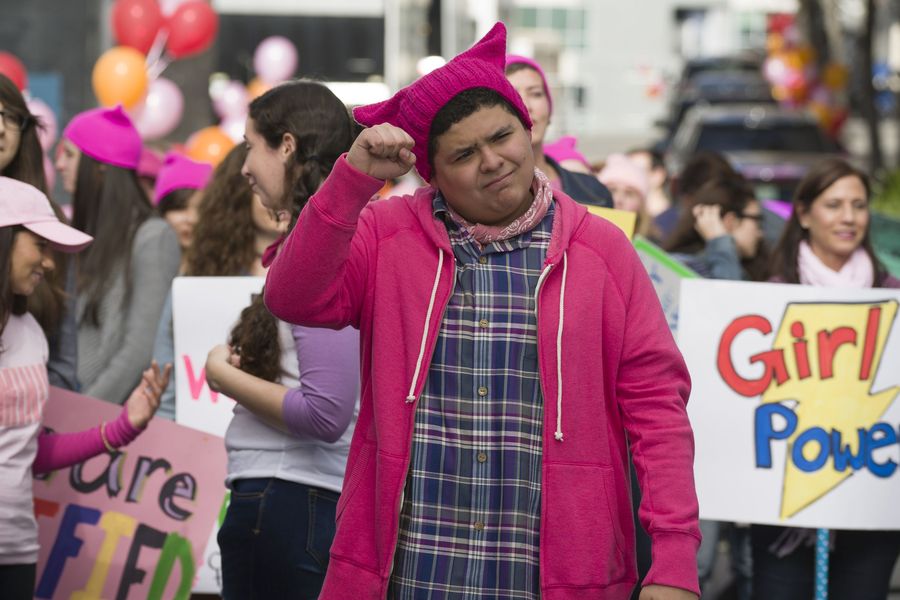 ABC’s Modern Family puts the awful Women’s March front and center in their latest episode, bringing with it all those biased and misleading talking points that come when liberals discuss what they consider “feminism.”

The May 3 episode “All Things Being Equal” follows the female characters' journey to a women’s march. They are especially excited to give the youngest girl, Lily, her "first taste of feminism," and call themselves "womentors," instead of mentors. Apparently this gives the episode carte blanche to go through every third-wave feminism issue short of telling people to vote for Hillary Clinton (though there is an “I’m with her” reference).

Of course, being a liberal show, Manny (Rico Rodriguez) and Luke (Nolan Gould) also join in the march, featuring some pink pussy hats for good measure. The two guys at the march provide the perfect opportunity for some shoe-horned alternative facts spewed by a budding young feminist from their school.

Luke: It's funny -- we've only been volunteering here at the women's March for an hour...

Luke: ...But it already feels like I'm part of something big, something really special. Would you snap a picture?

Manny: So you can prove you were here and get school credit, and be home faster than the ink dries on that poster you just misspelled? "Women Untie"?

Manny: Luke, these women deserve our respect. They've had to overcome biases and challenges we've never had to face. They're the granddaughters of the suffrage movement.

Manny: You wouldn't know her. You run in different circles. She's in honors classes and you, well, run in circles.

Danielle: Hey, Manny! It's so cool you're here.

Luke: And I'm here, too -- Luke Dunphy. You saw me now and you saw me at the end of the March.

Danielle: If you guys are making signs, here are some of the issues -- women make 79 cents on the dollar, and the government wants to tell me what I can do with my body. I mean, how would you feel if-

Luke: Whoa! She blew my mind. Society treats girls like second-class citizens. I've spent a lot of time on women's websites, but none of this stuff ever came up.

It’s weird how this episode clearly wants to use a march to empower women but still peddles false statistics about so-called "Equal Pay" and excludes pro-life women, as if we’ve never heard it all before. So not only do they think I’m incapable, they also think I’m too inept to have read the biased HuffPo headlines they're parroting. Funny how they make me feel worse for sharing a gender with people who think like this.

The feminist education continues with discussion of “mansplaining,” how women are “penalized” in this country of all places, and other topics that I thought liberals had moved on from following the climate march. Liberals list so many injustices in the U.S. that I can no longer keep track of them.

In a weird way, I’ll give some credit to Modern Family. I didn't think it was possible but they actually made me long for the time of throwaway comments about raising kids gay. Now I’m getting full episodes where they stack myth on top of myth in a blatant promotion of the Women's March's radical leftist agenda. It’s a much more efficient way of losing my faith in humanity.