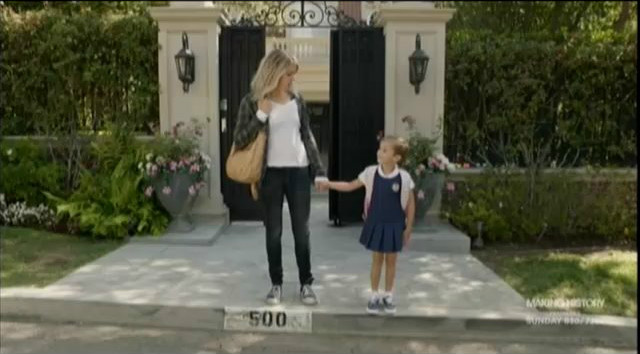 Fox’s The Mick finally got to the much-anticipated scene of a little boy wearing a dress saying it "breezes on his vagina," and the resulting episode is somehow even worse than the trailer implied, with the poor child having sexuality confusion as a result of being made to act transgender.

In the February 28th episode “The New Girl,” Mickey (Kaitlin Olson) pulls 7-year-old Ben (Jack Stanton) out of his prep school after the principal talks to her about his issues in class. Unfortunately, the only other school that is accepting new students happens to be an all-girl school across the street. That’s right, the scheme is to pretend Ben is "Beth" to get him an education as the school’s first transgender student.

This really confuses Ben who asks if he's a lesbian because he likes a girl in his class. And apparently he also likes a boy from his old school, too, but it's unclear if that's romantic or just kids being friends. It doesn’t stop there, however, a parent brings up concerns about his daughter sharing a public bathroom with a boy in a dress, which gets Mickey all offended. Just watch the fight go from bad to worse.

Ben: What are you doing here?

Mickey: Hi! I just came to see your principal. I see you made some new friends.

Ben: Yeah. I really like this girl Jennifer. Does that make me a lesbian?

Ben: Good. 'Cause I also like this kid named Brad from my old school.

Mickey: Sweet. Keep your options open. See you in a bit... Hope this is some sort of an emergency. I was in the middle of an important meeting.

Rita: This is Gene, a parent here. He has some concerns regarding Beth.

Gene: You kept me waiting, so I'm gonna get right to it. My wife and I aren't comfortable with our daughter sharing a bathroom with a boy in a dress.

Mickey: I'm sorry, I don't know anything about a boy in a dress. I know about a darling little girl in a dress-- is that who you're talking about, Gene?

Gene: Okay, look, I'm not trying to pass any judgments here, all right? Anything anyone wants to do or wear, I'm cool with.

Mickey: Well, would you listen to that! Gene here is cool with the rest of the world having free will. Thank you, Gene.

Gene: No. I'm just looking after my daughter's safety. I mean, come on, it's common sense, all right? That's why we have a boys' room and a girls' room.

Mickey: I got news for you, friend. The world is a dangerous place. Nobody's safe. It does not take a little boy in a dress to molest your daughter. I use the girls' room. I could easily molest her any time I want.

Rita: Whoa. Okay. Stop for just a moment. I understand this is a very emotional issue. We thought we were ready for this, but clearly we aren't.

Rita: So I'm sorry. Beth has to leave Barnsdale.

Mickey: (Groans) No. No. This isn't over. You tell your daughter to watch her back.

Someone never gave The Mick the memo that mocking people’s arguments hasn’t been working out for liberals as of late. Not to mention the fact that, oh yeah, THESE ARE CHILDREN. Not only are we indulging in the fantasy that boys can be girls, but we’re implanting the idea into the minds of impressionable, barely-developed kids. They can’t name every state capital yet, but apparently they’re ready to know which of the 31 genders they are (note: that number has probably changed since typing this) and think about if they are lesbian or gay.

Oh, just for clarification, we are told Ben is not transgendered - he calls himself "a transformer" - he just likes wearing girls clothes. That, according to his sister Sabrina (Sofia Black-D’Eia), only makes him "gender-fluid." This leads to a discussion among the family about what LGBTQ stands for. Middle son Chip (Thomas Barbusca) asks, "Where's the 'S' for 'Straight'? They can exclude us, but when we exclude them, we're the bad guys?"

In the end, I feel sorry for the transgender movement more than anything from this. Not only are they suffering from gender dysphoria and an alarmingly high suicide rate, but poor representations like this from The Mick certainly don't help.