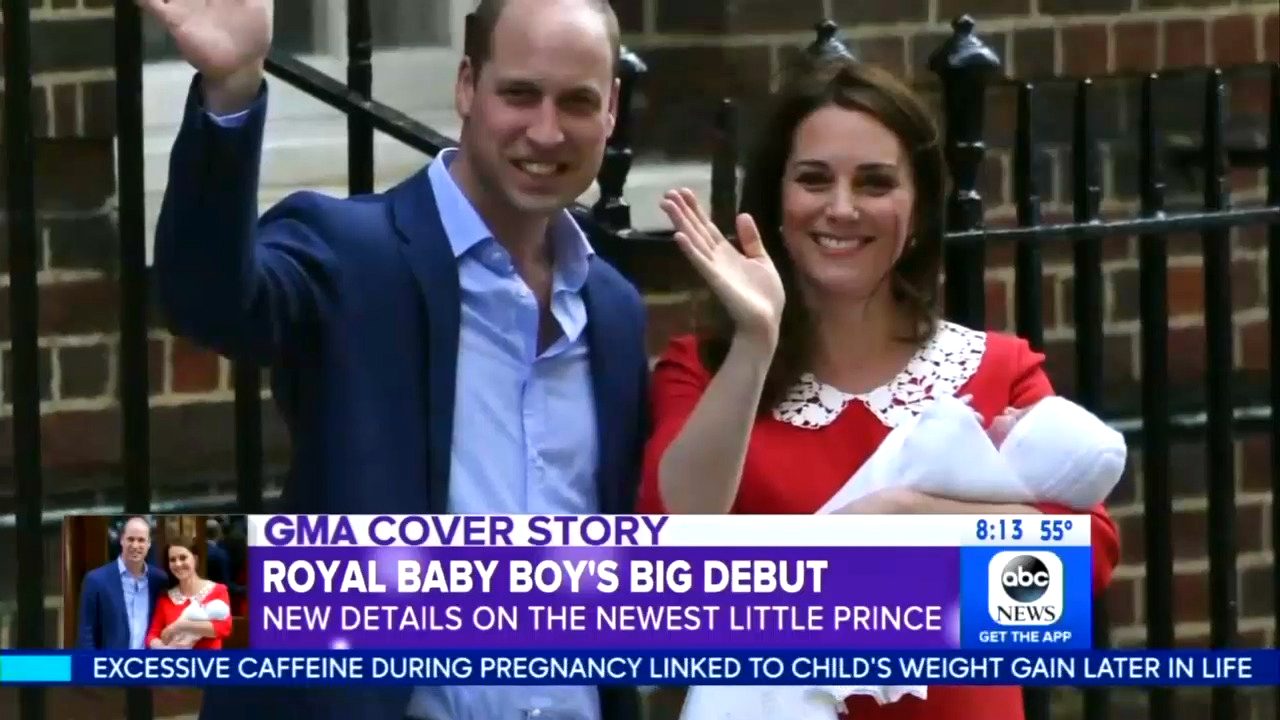 If the networks can spend nearly a half hour on the birth of one baby, why can’t they spare one second for a dying toddler?

Duchess of Cambridge Catherine (Kate) Middleton gave birth to her third child with Prince William on April 23. News programming on ABC, CBS and NBC devoted more than 28 minutes to the joyous news. That’s wonderful. What wasn’t so wonderful was that the very same programs ignored another U.K. baby as a hospital removed life support against his parents’ wishes. That controversial incident happened the very, same day. Like the royal baby, this child, Alfie Evans, boasts international attention.

But Alfie was also worthy of attention, although the broadcast networks didn’t reflect it.

While online media and Fox reported the Alfie Evans story, the networks have failed, (so far) to cover it even as his parents, Tom Evans and Kate James, fight the court system for his life. According to Tom on April 23, Alder Hey Children’s Hospital pulled life support from his 23-month-old who was suffering from a unknown degenerative neurological condition.

Alfie lived – and after six hours, doctors resumed oxygen and water on Tuesday as a British judge heard an emergency hearing, according to an AP report. (Another appeal the Evans' have lost.) Later on April 24, Tom wrote that Alfie had been "starved from nutrition" for 23 hours and, in an earlier post, the Evans' Instagram account for Alfie said the child had been breathing on his own for 22 hours.

The British courts refuse to let Alfie Evans leave the country for treatment elsewhere even though Italy granted him citizenship, the Italian defense ministry has transportation prepared, and a Vatican-owned hospital is ready to admit and treat the child.

On April 13, Alfie’s hospital released a statement insisting that no more could be done for the toddler.

“At each stage of the legal process,” it read, “the courts have agreed with the treating team and the independent expert advisors instructed by the Trust and the family that Alfie’s condition is irreversible and untreatable.”

An April 6 statement argued that “continued active treatment” was not in Alfie’s “best interests.”

But Alfie boasts powerful supporters, including the pope. A vocal advocate for little Alfie before and after meeting with Tom Evans, Pope Francis tweeted support for Alfie again on April 23.

“Moved by the prayers and immense solidarity shown little Alfie Evans, I renew my appeal that the suffering of his parents may be heard and that their desire to seek new forms of treatment may be granted,” the pontiff said. 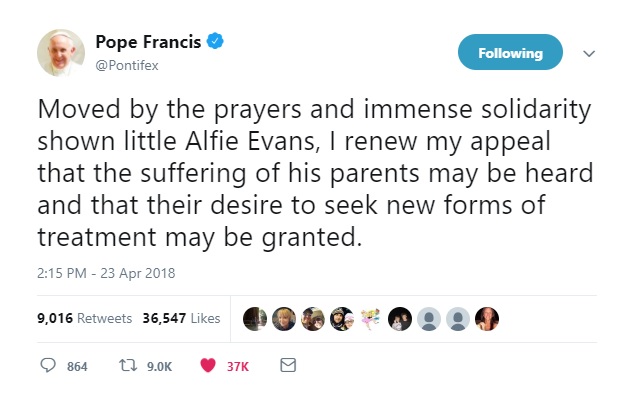 The child also has many supporters on Facebook. A group called “Alfies Army” includes more than 335,000 members – some of whom protest outside Alder Hey hospital. The Evans’ also recently petitioned Queen Elizabeth II.

Live Action president Lila Rose also spoke out for Alfie in an April 24 statement: “Yesterday, the Royal family welcomed a new baby into their family amid international celebration. Meanwhile, the British government deemed Alfie unfit to continue living. If this was a royal baby fighting for his life, would the British courts have ruled so cruelly?”

The legal battle over Alfie Evans’ treatment came less than a year after the similar case of Charlie Gard, a British baby diagnosed with a rare genetic condition. Initially, the networks kept silent on his story, until both Pope Francis and President Trump tweeted about him.

Methodology: MRC Culture watched the evening news shows April 23 and the morning news shows April 24 of the three broadcast networks (ABC, CBS, NBC). For the baby time tally, MRC included stories reported in connection to the royal baby (such as interviews with doctors on childbirth). In addition to full segments, MRC counted shorter commentary in the shows, but not teasers. MRC Culture also searched for “Alfie Evans” in Nexis transcripts.