While President Trump’s tweets frequently spark debate and controversy, his latest one is oddly inspiring media support – or, at the very least, positive media coverage. The major networks initially refused to cover the story of Charlie Gard. But all of that changed after the president offered to help the terminally-ill British baby. 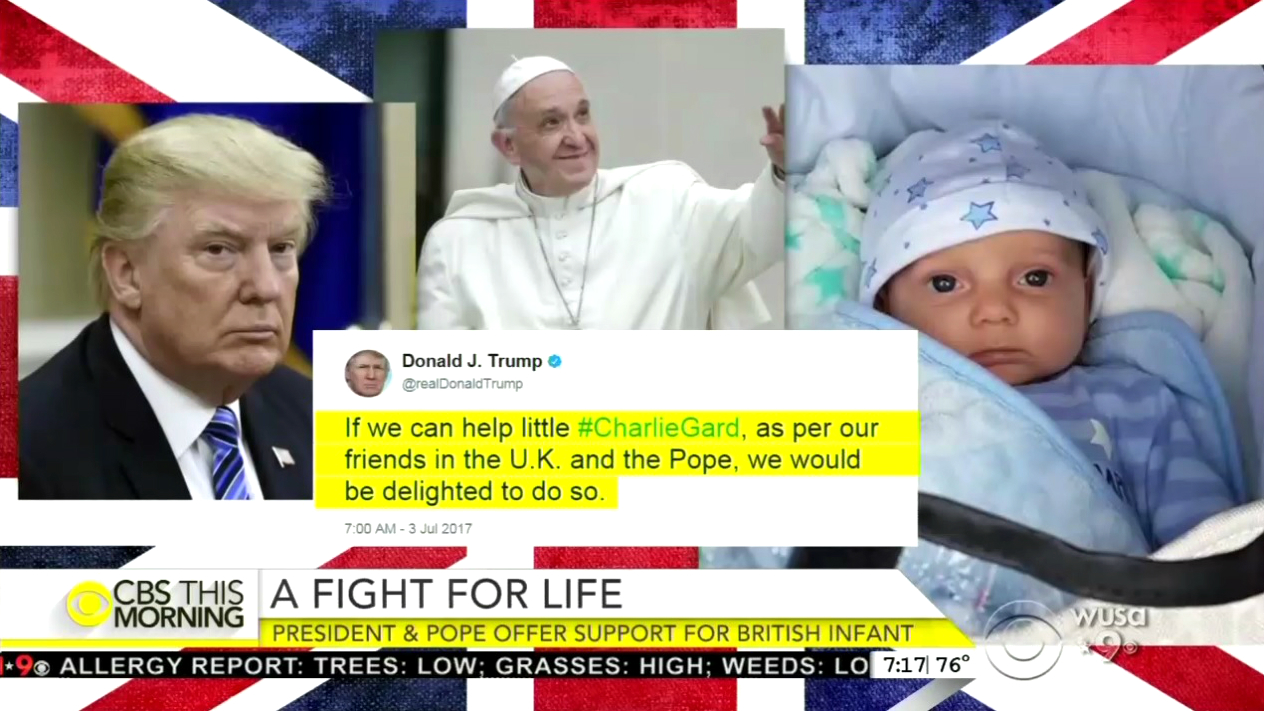 Charlie, who turned 11-months-old on Independence Day, could lose life support any day now due to the European Court of Human Rights’ decision “in Charlie’s best interests.” And now, networks like CBS, are going so far as to credit Trump’s tweet as part of the “parents’ final hope.”

Shortly after his birth, Charlie was diagnosed with infantile-onset encephalomyopathic mitochondrial DNA depletion syndrome (MDDS). The rare genetic condition and brain damage has left Charlie deaf and blind, subject to seizures and unable to move his limbs or breathe on his own.

After his doctors suggested removing Charlie’s ventilator, parents Chris Gard and Connie Yates sought legal permission to bring their baby to the U.S. for experimental therapy. But court after court sided with Charlie’s doctors at London’s Great Ormond Street Hospital. And, last week, the parents lost their final legal appeal, despite raising £1.3 million on a crowdfunding site to pay for Charlie’s treatment.

While British news had long covered the tragic case, America’s big broadcast networks kept quiet during their news shows. That is, until President Donald Trump tweeted about Charlie Monday morning – pushing the story into a national spotlight.

If we can help little #CharlieGard, as per our friends in the U.K. and the Pope, we would be delighted to do so.

ABC fill-in anchor Tom Llamas, during World News Tonight, also noted the president “weighing in on an emotional medical case there” by tweeting “he would like to help.”

With a more detailed report than the other two, CBS Evening News anchor Elaine Quijano introduced a segment on Charlie by saying, “President Trump and Pope Francis are offering to help a terminally-ill baby in Britain.” While the Vatican’s Pontifical Academy for Life initially appeared to side with the courts, Pope Francis clarified Sunday that he stood with Charlie Gard and his parents.

And the coverage didn’t end there. The networks continued reporting the case into Independence Day.

Filling in on NBC Today, co-anchor Sheinelle Jones covered President Trump “offering his support to the infant's parents” and even revealed that “there have been press reports that the president might make an unscheduled stop in Britain.”

“With legal options exhausted, high-level pressure, such as the tweet from President Trump, is the parents' final hope,” she optimistically concluded.

For This Morning, CBS fill-in co-anchor Dana Jacobson also reported on the “tweet from President Trump” that “intensified a global debate about a British infant and the limits of medical care.”

Foreign correspondent Charlie D’Agata pictured Charlie at the “center of an ethical and legal battle that now involves Pope Francis and President Trump” while the chyron read, “A Fight for Life.”

He suggested the president could influence the case, adding, “If President Trump holds any sway in this case, ultimately the decision rests with the hospital staff here: whether they've had a change of heart and Charlie is allowed to travel to the United States or whether his life support will be switched off as planned.”

That evening, on NBC Nightly News fill-in anchor Peter Alexander introduced another segment on little Charlie “who’s become the center of global attention.” “Both President Trump and Pope Francis have weighed in,” he added.