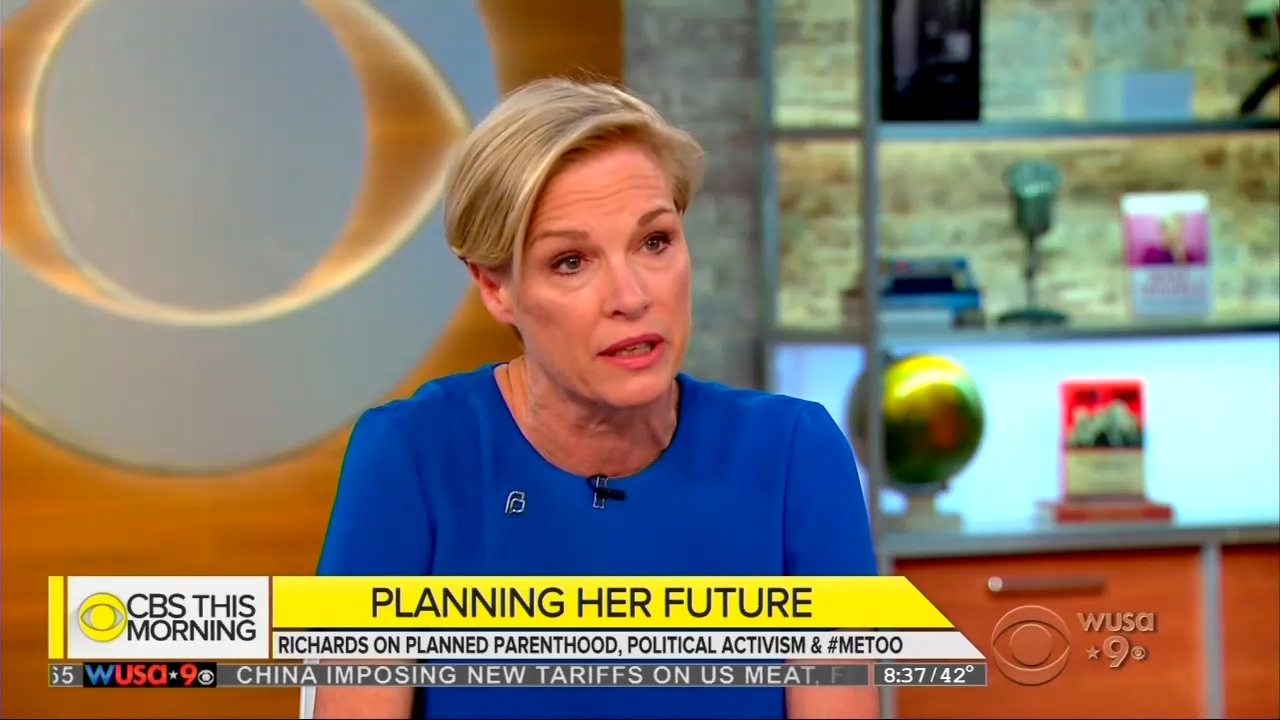 On Monday, CBS This Morning fill-in co-anchor Bianna Golodryga introduced Planned Parenthood president Cecile Richards on-air to discuss her new memoir, Making Trouble. During the interview, anchors wanted to know if, among other things, Richards would be “running for office” as headlines announce her plans to leave Planned Parenthood.

Before turning to Richards, Golodryga listed abortion as a part of the “health care” that Planned Parenthood provides.

King did the same, acknowledging that “for 12 years, Richards fought for women's health care.” She repeated herself as she asked Richards about Americans who get distracted by the A-word.

“As you point out, you provide health care,” King said. “But for so many people, Cecile, they hear ‘Planned Parenthood,’ and it’s like this [she crossed her fingers]. It’s very polarizing and very divisive for a lot of people because they only concentrate on the word ‘abortion.’”

In response, Richards insisted that, “we do more to prevent unintended pregnancy than any organization in this country.” Prevent? Or did she mean “end”?

Richards’ memoir comes a month before she plans to step down from Planned Parenthood. Pro-life leaders have noted the “trail of misery” Richards will leave, including 3.8 million lives destroyed in abortion.

Abortion, Richards said, is one thing Planned Parenthood will not give up. She discussed how “very disappointed” she was after meeting with Jared Kushner and Ivanka Trump privately last year.

“It really seemed pretty clear that they just wanted to make a political deal,” Richards said. “They wanted us to quit providing abortion services to women in America.”

King prompted, “Didn't they say we could guarantee funding if you say you'll stop abortions?”

Richards concurred. “I just said, ‘we will never turn our backs on women in America,’ she said. “It’s a legal service.”

“In the Democratic Party right now, you cannot be against abortion rights and survive as a Democrat,” he said. “Why do you think that is?”

“I actually don’t think that’s right,” she responded, pointing to a “difference between respecting people’s personal opinion and what do you want the government to actually do.”

That wasn’t good enough for Dickerson.

“But do you think if you're a Democrat who agrees on restrictions of abortion of some kind that you will have success in the Democratic Party?” he added.

“Well, I mean, I don’t know, there are people running all across the country,” Richards admitted. Odd, considering that last year, Richards said it wasn’t difficult to be both pro-life and Democrat.

Towards the end, King found the book’s title “appropriate,” since Richards refused to say the Lord’s Prayer in class as a child, and later protested the Vietnam War with a black armband in 7th grade.

Richards hoped her book would serve as both a memoir and a “call to action for people who want to make a difference in the world.” Including, maybe, herself.

As Richards commented on the number of women running for office, King chimed in.

“It’ll be interesting to see your next chapter, Cecile Richards,” King concluded. The book boasts network ties: it’s published by Touchstone, an imprint of Simon & Schuster, which is a division of CBS.