On Wednesday, U.S. District Judge Tanya Chutkan ruled that the Trump administration must facilitate an elective abortion for a detained 17-year-old in the U.S. illegally. Represented by the ACLU, “Jane Doe” is currently staying at a federally-funded shelter in Texas after crossing the border from Mexico. The U.S. Court of Appeals temporarily blocked the order and hears oral arguments of Garza v. Hargan in Washington, D.C. Friday.

Although media outlets reported that the minor, now 15-weeks pregnant, would use private funds for the abortion, pro-life leaders and politicians are warning about the use of taxpayer funds.

“Not surprisingly, the ACLU seized this opportunity along with their abortion allies to mandate that taxpayers facilitate her abortion,” she urged. “It’s a shocking case because it shows you just how far the ACLU, their friends at Planned Parenthood and the abortion industry want to take their extremist abortion agenda.”

“They want to use this girl,” she added. “And what they're trying to do is use her as a sort of a Jane Roe 2.0 to internationalize Roe vs. Wade.”

In a piece for The Federalist, Hawkins argued that a “so-called ‘right’ to abortion for illegal aliens will result in major bills for U.S. taxpayers on behalf of non-citizens.”

To support her claim, she cited Texas Attorney General Ken Paxton, who argued that “Granting Plaintiffs’ motion for a TRO and preliminary injunction would create a right to abortion for anyone on Earth who entered the United States illegally, no matter how briefly.” He concluded, “And with that right, countless others undoubtedly would follow.” 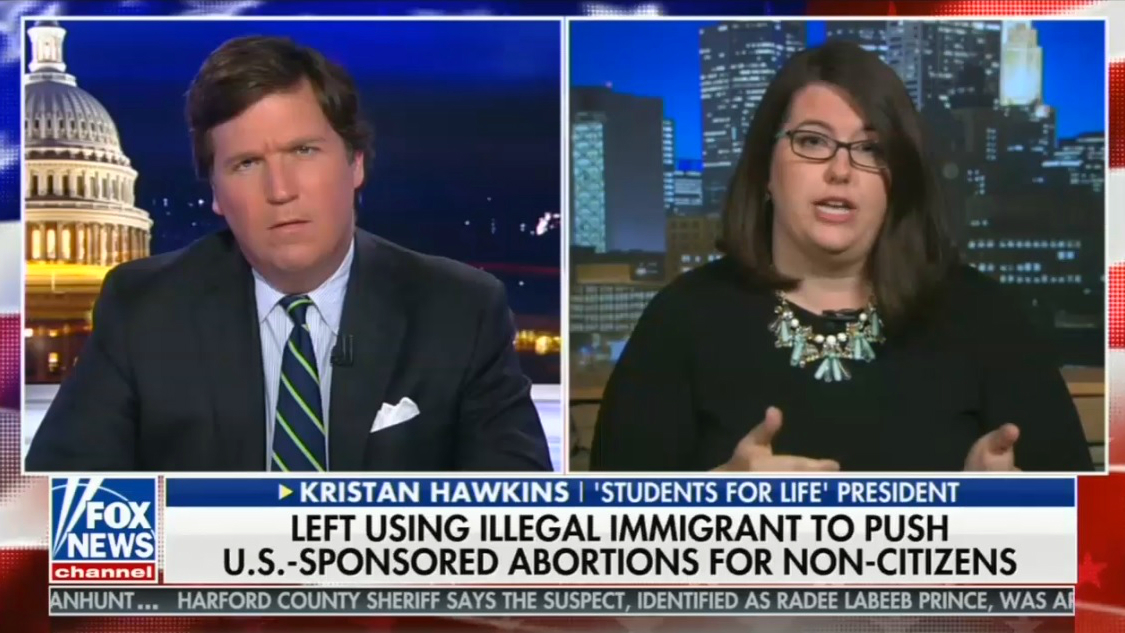 In other words, while federal money is generally prohibited from funding abortion due to the Hyde Amendment (which bars taxpayer funding except in cases of rape, incest or to save the life of the mother), immigrants here illegally for abortion could stay on the taxpayer’s dime.

As a spokesperson for the Department of Health and Human Services (HHS) told The Huffington Post: “the mother and unborn baby are in a federally-funded government program.” The HHS Administration for Children and Families also warned that Chutkan’s ruling "exceeds the US Constitution and sets a dangerous precedent by opening our borders to any illegal children seeking taxpayer-supported, elective abortions."

In a press release, Susan B. Anthony List President Marjorie Dannenfelser similarly warned that the “outrageous” ruling by Chutkan “sets a dangerous precedent.”

“The U.S. Department of Health and Human Services took a simple position that it would protect the life and dignity of the teenage girl and her unborn child while in their care,” she said. “Shame on this judge for overruling compassionate care and instead mandating that the U.S. government help facilitate an abortion for a teenage girl.”

“This ruling plays into the broader agenda of the ACLU, which is recklessly exploiting a teenage girl in order to make the United States a sanctuary state for abortion,” she added. “We urge the Justice Department to appeal this ruling.”

Furthermore, organizations like Planned Parenthood, America’s largest abortion provider, receives hundreds of millions in “government health services, reimbursements & grants” each year -- money that pro-life leaders argue is fungible. The argument that money is fungible, or that Planned Parenthood could offset costs with public funds to free up other resources for abortion, is a point frequently highlighted by pro-life groups.

“Americans United for Life is deeply disappointed that once again, an activist judge has declared abortion ‘access’ more important than U.S. law and policy that prohibits federal funding and support of elective abortion,” Glenn Foster urged. “This ruling mandates that taxpayer funds be expended to facilitate the destruction of an innocent human life, in violation of the Hyde Amendment and the consciences of millions of American citizens.”