'Blackish:' Reagan Never Saw a Black Man He 'Didn’t Want to Break in Half' 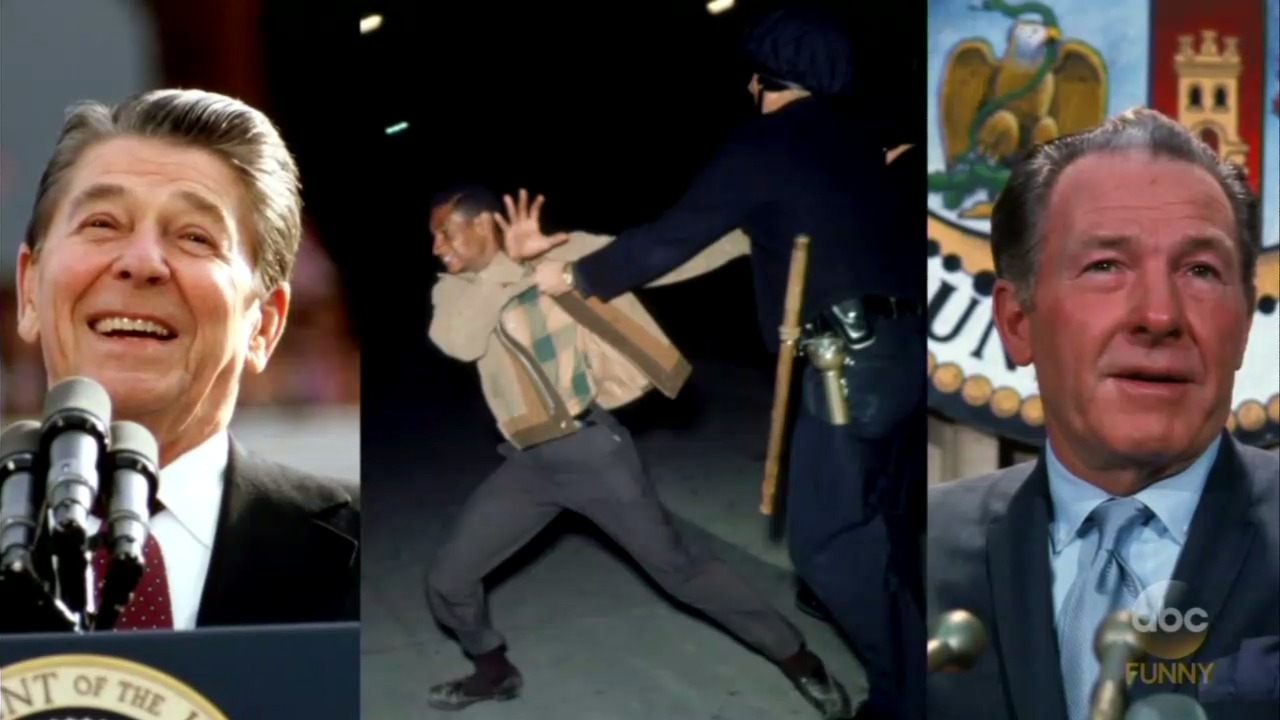 In the March 20 episode of ABC’s Blackish, titled “Things Were Different Then,” things weren't so different as cheap shots were thrown out at Republicans, which this is not unusual for this show. This episode even reached back to Ronald Reagan’s days as governor of California to call him a racist who would like to "break" black men "in half.”

As Andre “Dre” Johnson (Anthony Anderson), his son Junior (Marcus Scribner), mother Ruby (Jenifer Lewis), and friend Smokey (Cedric the Entertainer) are planning a 65th birthday party for his father Pops (Laurence Fishburne), the less than savory truth of Pops’ past comes to the attention of young Junior.

Photos that Ruby brings to the table as they plan the party conjure up memories and Dre and Ruby reminisce. Junior is appalled about Pops’ actions as a hustler back in the day and decides he doesn’t want to celebrate his grandfather after all.

Junior: I feel like I don't even know this guy. He stole mattresses, gambled, forged passports, roundhoused. Is his name even "Pops"?

Dre: So, you're saying you're not on Pops? Are you not hearing the same stories that I'm hearing? Put yourself in his shoes. Think about it. Pops tried to escape the racism of the Deep South and fell into the racism of Deep South Central. Sam Yorty was mayor, Ronald Reagan was governor, and they ain't never seen a black man they didn't want to break in half. Pops' generation was the last hired and first fired. And remember, he didn't make a lot of money, so he had to stretch it as far as he could for his family -- especially around the holidays. That's why he had his side hustles -- To turn 1 dollar into 2. Look, Pops wasn't perfect, but he was more than most. I remember once, I had a friend over, and he asked who that man in the hallway was. I said, "That's my dad." He had never seen a dad before. I was one of only a couple of friends who even knew their dad. Yeah, it's easy to judge Pops now because he survived long enough to be judged. But the truth is, if I was in his place, I don't think I'd have done anything different. Your grandfather made it to 65 despite everything working against him. We need to celebrate that.

Junior: Guess I didn't think of it like that.

There you have it. A major dose of victimization and random attacks on Republicans are presented in a lecture on Pops’ struggles as a black man in America. Mayor Yorty, by the way, was a Democrat up until 1980 and his staff in Los Angeles’ City Hall was fully integrated. That didn’t fit Dre’s narrative, though, so history is embellished.

Also, in this episode, Rainbow “Bow” Johnson (Tracee Ellis Ross) takes a cue from liberal television creator and writer Shonda Rhimes, after watching an interview online, and decides to only say “yes” to the twins for a year. It is all in the name of getting to know her children better. So, along the way, the kids and Bow have a water gun fight and Jack (Miles Brown) really enjoys it. He comments on how amazing it was and Diane (Marsai Martin) notes that Jack thinks everything is awesome. Jack’s response is, “Excuse me for finding a little bit of joy in Trump’s America.” Oh, boy.

It seems it is impossible for this show to just entertain without throwing in some kind of political commentary at the expense of conservative viewers. In this episode, the slams were particularly lame ones.