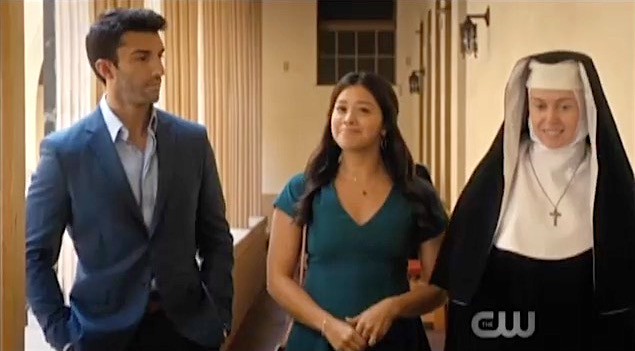 In “Chapter Fifty-One,” Abuela guilts Jane (Gina Rodriguez) into going to church after not attending for a while (she was angry at God because her husband Michael was shot as they began their honeymoon) but her son Mateo’s father Rafael (Justin Baldoni) tells her that baby Mateo is too young to attend. He doesn’t want Mateo to turn out “super religious,” which means going to church every Sunday – the horror! Plus Rafael doesn’t trust the Catholic Church and its “crooked nuns.”

Michael: Your mother’s coded bank account number links to this convent in Italy.
Rafael: A convent?
Michael:  I take it she wasn't religious.
Rafael: Well, we certainly never went to church.
Narrator:  Hmm. Suspicious.
Michael: The convent's in Orvieto.
Rafael: That's where my mother was born.
Michael: She's been paying them ten grand a month since 1984. Any idea what those payments might be about?
Rafael: I have no idea. I hardly knew her.  But monthly payments... Why, that sounds like... A bribe...
Michael:  Or blackmail.
Rafael: So what now?
Michael: We wait to see what the Italian authorities dig up on those-those-those-those crooked little nuns.
Jane:  Stop it right there. All nuns aren't crooked... Seriously, you can't assume that all nuns are evil.
Rafael: Watch it with the knife.
Michael: All we know right now is someone in the convent deposited those checks. Finding out exactly who is like a needle in an Italian haystack, for now.
Jane: So while we're on the subject of... Catholic stuff, I was wondering if I could take Mateo Sunday mornings.
Rafael:  Every Sunday?
Jane:  Yeah. I want to start bringing him to church.
Rafael: No. No, he's too young.
Jane: Well, I went to church when I was his age. And you can't just say, "No."
Rafael: Well, I can't just say "Yes," either. It's part of a bigger conversation.
Jane:  What is?
Rafael: I just don't want him to be super religious.
Latin lover narrator: Ah, yes. As you recall, the new dynamic between Jane and Rafael involves Rafael feeling much more comfortable disagreeing with Jane. Which Jane really hates.
Jane: And by super religious, you mean...
Rafael:  Church every Sunday, before he's able to make the choice to go for himself.
Jane: That's not super religious.
Rafael: Well, it is to me. And wait, I already told you, if I disagreed, I'm gonna push back.
Jane: Yeah, but I was hoping, like, once a year.
Rafael: You're the one that brought up church.
Jane: Because it is so important to me.
Michael: Well, it's not that important. (Laughing): We haven't even gone since we were married, so...
Rafael: So that's a no on church every Sunday. Thank God.

Rafael finally learns the truth about his mother’s payments from the convent’s Mother Superior. She sold his father stolen art, then was paid off by his mother to remain silent. She justified her criminal activity by considering herself to be like Robin Hood – robbing the wealthy to provide for the orphanage, which was in financial trouble.

Once again a show portrays the Catholic Church as being corrupt and hypocritical. At least in this case Mother Superior regrets her past actions, so that's a minor saving grace.

In the end, after talking with the Mother Superior, Rafael decides he will turn over the stolen art to the police and turn himself in for his role in covering it up. Now, if only Rafael could realize that going to church each week doesn’t make a person “super religious,” but rather comforted and strengthened to do the right thing.