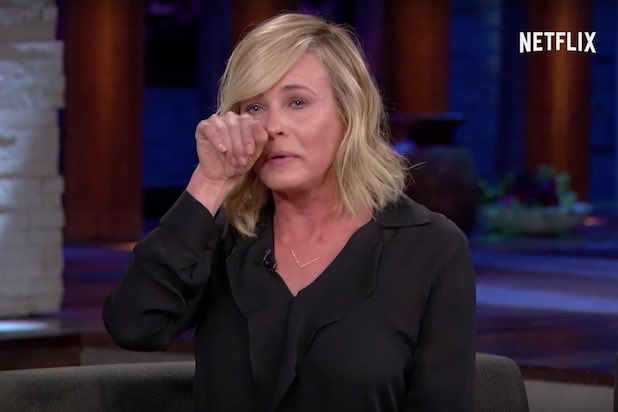 California Senator Barbara Boxer was called upon to counsel Chelsea Handler on her Netflix show that was taped the day after the presidential election results. Talk about a meltdown – in Thursday's episode titled “The Day After with Sen. Barbara Boxer,” both women were in tears that Hillary Clinton lost to Donald Trump. It was a ridiculous spectacle.

Chelsea Handler opened with a self-serving throwaway line – she’ll suck it up and do the show to honor Hillary Clinton though she is depressed and confused over the election results. What a precious snowflake-type of show opener.

“My heart is on the floor,” said outgoing California Senator Barbara Boxer. “I’ve learned how painful politics can be. But you don’t run away. You pick yourself up, as the president says, and you fight even harder for the country because it’s ours.” Two things there – Hillary Clinton ran away on election night and refused to make her concession speech to the loyal supporters who waited all night to hear it, and excuse me, this country is for all Americans, not just the Democrats.

After touting Hillary’s popular vote win, Sen. Boxer then declared the Electoral College system “is a bad system. It was set up so long ago.” Maybe during the next Constitution Day in a local elementary school, the senator can stop in and take a refresher course.

Boxer was delighted that “Millennials voted overwhelmingly for Hillary Clinton” and then Chelsea took credit by claiming 7,000 people registered to vote through her public service announcements during her show. The arrogance and self-importance displayed by these two women was breathtaking.

Boxer admitted she hadn’t spoken to Clinton since the loss, though they were related by marriage at one time (Boxer’s daughter married one of Hillary’s brothers) and then the waterworks started. Boxer had to take a moment to compose herself after telling Handler that she prefers to write to Hillary as she just has so much to say and then Handler cried, too. Also, this was when Handler blamed the usual liberal reason when a woman fails – it was sexism.

Wealthy Hollywood celebrity Chelsea Handler reneged on her pledge to leave the country if Trump won. She said she wants to move to Spain, where she bought a house in case Hillary wasn’t elected president, but claims her staff told her she has to stay and fight, using her show to do so. In other words, they told her they don’t want to lose their jobs. Shocking, another lefty Hollywood celebrity won't put their money where their mouth is and follow through on their promise to leave the country if their candidate didn't win.

The best part was when Chelsea Handler said that “if you are caught lying on camera three times in a row, hat automatically disqualifies you.” How great is that whopper? She's way too dense to even realize that what she said there exactly describes Hillary.

Boxer quoted Martin Luther King, Jr. and said that “the arc of history is long but it bends toward justice.” Sure does, Senator Boxer. You just didn’t see it coming this time.