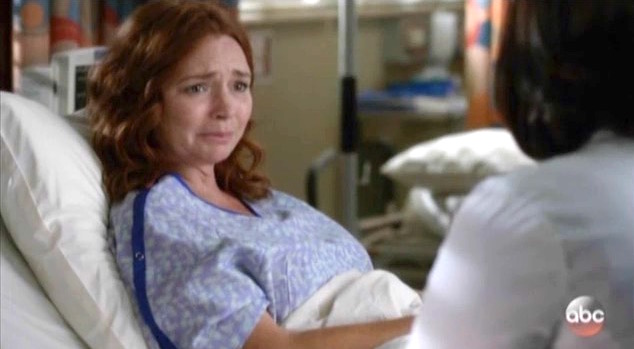 In Thursday’s episode of ABC’s Grey’s Anatomy, titled "Roar," a brave, determined pregnant cancer patient took a pro-life stance rather than be bullied into an abortion by the doctors at Grey-Sloan Memorial Hospital.

During a random, casual conversation in a courthouse security line between a pregnant woman in her sixteenth week named Veronica and Dr. Alex Karev (Justin Chambers), Karev noticed a rash on the pregnant woman’s hands and encouraged her to seek medical attention.

At the clinic later, test results showed Veronica had stage 4 pancreatic cancer - a terminal diagnosis – with less than a year to live, even with treatment. Unfortunately, the pressure began immediately for her to have an abortion so that her chemo and radiation could begin. Dr. Miranda Bailey (Chandra Wilson), Chief of Surgery, was not receptive to an alternative procedure that would try to keep the baby alive long enough to be born. She only saw one patient, when she should have seen two.

Veronica: I'm sorry, but it sounds like you want me to terminate my pregnancy.

Jo: We need to begin treatments as soon as possible.

Miranda: And the baby couldn't survive them.

Veronica: So, the baby's healthy. The thing that's wrong here is me, right? Well, how much time do I get? I mean, if I do what you're asking and I get all the treatments, how much time will I have?

Miranda: Less than a year.

Veronica:  Then what is the point? Why can't we just wait until after the baby's born, and then you can nuke my body full of chemo all you want?

Jeremy: You're not listening. She's not listening. They're saying... That without the treatments, the cancer will kill you before the baby's even born. In a month, two months, you'll both be dead.

Veronica: I went to court to fight a traffic ticket so I could save $360 so we could buy an organic crib mattress. This is how my day started. And now I'm... All day long, I have been thinking that there is -- there's a reason that I was in that line. There's a reason that I met you. And I don't believe in God or fate or anything.

Jeremy: She doesn't at all.

Veronica: But this is it? I met you so you can tell me that our baby has to die and then go crawl off somewhere and die myself. These are my options? Just death? And more death?

Alex: What about a Whipple?

Miranda: The baby wouldn't survive being under that long.

Alex: Then we do it open. Cut the time in half. We forgo the first round of chemo and do this surgery instead. Remove the cancer from your pancreas without harming the baby, then close you up.

Alex: No, but it could keep you alive long enough to deliver a healthy baby. It'll buy you both some time.

Miranda: Dr. Karev. What the hell? You are not some hotshot surgeon right now. You are a doctor in the clinic. You cannot go around suggesting outrageous procedures!

Alex:  I was giving my patient her options.

Miranda: The patient you only have because I gave you the chance in the clinic in the first place!

Alex: I'm sorry! But I wasn't wrong. I didn't promise the impossible. Yeah, I overstepped, and I'm overstepping again and pissing you off, and I don't care. Go on, get mad at me, but don't take it out on the patient. Just give her a freaking chance.

Miranda: When I tell you to know your place, know your damn place.

This is a horrible situation for a pregnant woman receiving a cancer diagnosis. In this case, an aggressively pro-abortion Chief of Surgery made it all the more traumatic. Miranda should have been searching for ways to save the baby of a dying woman but instead got upset at Karev for suggesting an alternative.

An abortion should be the last recommendation for an ill pregnant woman, not the first. As this article explains, 60% of women report feeling pressured into abortion instead of pursuing alternatives. “A conscientious doctor will struggle with such cases, and will make all reasonable efforts to preserve the child’s life if possible. The trouble lies in the fact that abortion advocacy efforts have created a climate in which many doctors feel safest recommending abortion at the first sign of trouble.”

In the end Veronica takes a stand and insists the doctors do everything to save her baby. It is a powerful pro-life monologue about finding meaning in life and leaving something good in the world instead of just death. It is a shame that Miranda had to be convinced by her patient to save her baby’s life, but “humanizing the fetus” works, apparently.

Miranda: I wanted to talk to you about scheduling the D&E.

Veronica: Dr. Karev said there was a surgery. Why aren't we doing that surgery?

Miranda: Because it's very risky to you, to the baby.

Veronica: I already have an expiration date. Aren't we past a little worried about some risks?

Miranda: If we did this, if we could remove the tumor and keep your pregnancy intact, by the time you deliver, the cancer will have still grown unchecked for six months. It'd be too far along by then for us to treat it. I mean, you would literally be sacrificing your own life for your child's.

Veronica: I can see it, you know?

Veronica: Jeremy pushing our kid in the swing, touching his toes when they're in the sky. And the baby thinks it's so funny. I can see them growing older together, getting to the good stuff. Jeremy showing him "Star Wars" for the first time. "Episode IV," 'cause you can't start anywhere else. High school, college... His first apartment. Jeremy's there, and he's the best dad. I picture that, and all this crap is for something. A happy ending. I die, but there's something good still. There's something good to see. I picture it your way, and everything goes black. There's nothing. Only death. If this is the only chance that my baby has to survive, I am not looking for a guarantee. I'm looking for a chance.

It is not nearly as unusual as you might think, however, that women bravely decide that both lives should be spared – or that the baby must be spared, even though the doctor insists an abortion is the solution to a cancer diagnosis.

Many doctors now believe that there is no need for abortion, especially after the first trimester. “A collection of research studies published in a special edition of The Lancet medical journal has offered reassurance for women as it was found that chemotherapy treatment after the first trimester does not harm the unborn child.” As this article states, “There are no data to suggest that pregnancy termination alters the biological behaviour of the tumour or patient prognosis in the presence of appropriate antineoplastic therapy. All patients should be given appropriate advice and informed that there are insufficient scientific data to determine any generally accepted consensus.“

Today’s research finds a quite different opinion among doctors treating pregnant women with cancer than even ten years ago when abortion was recommended before surgery or treatment. Doctors at world-renowned cancer hospital M.D. Anderson in Houston find that chemotherapy doesn’t affect a baby in the womb.

The Chief of Surgery at Grey-Sloan Memorial Hospital should have known all that. Unfortunately, the pro-abortion Hollywood screenwriters who have such little regard for the constitutional right to life showed the same disregard for medical research in defense of that right.

ABC missed a real opportunity to move away from an outdated attitude. CBS didn’t make the same mistake. However, both ended with babies saved from abortion and that's the important thing.