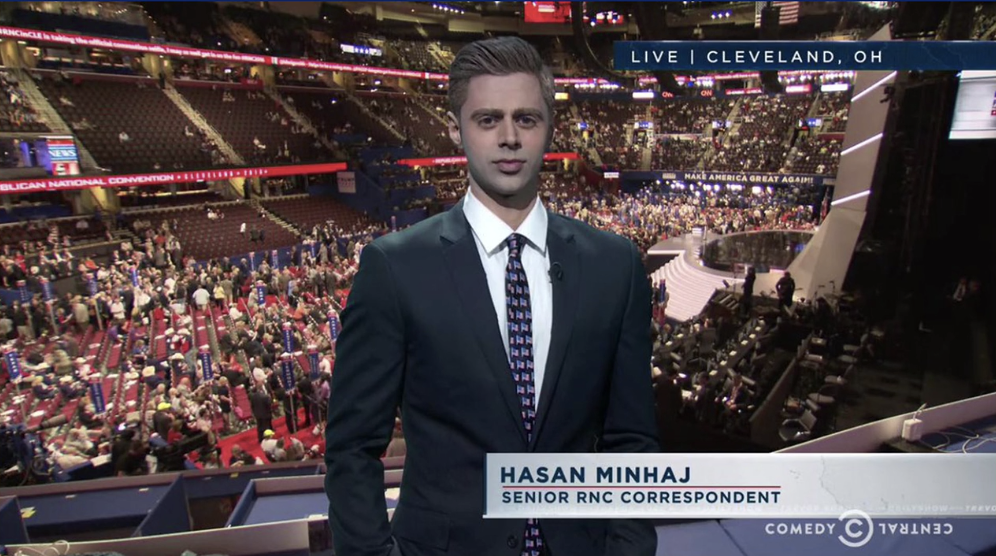 The current episode of Chelsea is titled “It Felt Like Racist WrestleMania” and that is exactly how her guest Hasan Minhaj described attending the Republican National Convention. He went in "white face" make-up as his alter-ego “Chad Smith” just for grins – and because all Republicans are scary racists in his fragile little liberal world. Can you imagine a Republican pulling such a stunt and the outrage that would follow?

Host Chelsea Handler introduced the Indian-American Minhaj (senior correspondent for The Daily Show) as “Donald Trump’s worst nightmare – he’s brown, he’s Muslim, and he’s got perfect hair.” She brought him on to talk about his adventures at the RNC because in the world of the Hollywood left such an event is like visiting another planet.

Minhaj started out by labeling the convention as “a racist Comic Con,” “racist WrestleMania” and much more “terrifying” in person than on television. The experience for the poor delicate liberal was like being “in a haunted house with the lights on.” Get it yet? Republicans are scary racists!!!

Minhaj mocked the Muslims for Trump speaker as the “Pakistani Borat” and said, “This dude is fucking insane” for supporting Trump. He stated that Republicans forget that “immigrants are dope,” though Trump is married to his second immigrant wife, so obviously he finds them pretty “dope,” too.

Then the social justice warrior emerged as Minhaj encouraged those on social media – specifically Twitter – to help make it easier for white people to talk about race. See, if you just re-tweet funny things that guys like him tweet, then “justice will be served” at some point. Or something.

Taking over the world, one tweet at a time. Yeah, that’s the ticket. Only in Hollywood.