Just as you would expect, the 2016 BET (Black Entertainment Television) Awards were full of Black Lives Matter references and reminders to register to vote and then get out the vote for Hillary Clinton. After the opening of the award ceremony featured Beyoncé and her back-up dancers marching into the auditorium to a Martin Luther King, Jr. speech, actor and producer Terence J went on to say, “Your vote is your voice,” and reminded everyone to register and “vote smart” as he introduced the show hosts, ABC’s Blackish stars Anthony Anderson and Tracee Ellis Ross.

Ellis Ross made her plea for Hillary in a personal way. She noted that the single woman demographic (which includes herself) is the largest and most important for a White House win, so “Welcome to the White House, Hillary Clinton.”

Tracee Ellis Ross:  As we all know, we have a very important election coming up, and we all need to vote, yes? There will be millions of you eligible to vote, so please get yourself registered. Also, millions of first-time voters will be of age this year, so again, get yourself registered. This is such an important election. You know what I heard? I heard that one of the largest most influential demographics is single women in this election. Oh, yeah. So basically, technically, what this means is I will be determining the next president. Welcome to the White House, Hillary Clinton.

Empire star Taraji P. Henson, while accepting her award for Best Actress, made a veiled reference to the presumptive Republican nominee, Donald Trump, when she said, “I’m not really political, but it’s serious out here. For those who think he isn’t going to win, think again. We really have to pull together and turn this country around.”

And then BET’s Chairman and CEO, Debra L. Lee, combined gun control and the Black Lives Matter movement by complimenting Rep. John Lewis and the Democrat sit-in in the House of Representatives – “We are tired of the devastating effects gun violence has on our community.” She instructed everyone to “know your politicians’ position on gun control.” She was there to present the 2016 BET Humanitarian Award (sponsored by State Farm) to Grey’s Anatomy actor Jesse Williams after praising his history of community organizing and activism, most recently in Ferguson, Mo. and with the Black Lives Matter cause.

Williams, in turn, went on a five-minute screed about injustice in America via a "system built to divide and impoverish and destroy us." He said, "We've been floating this country on credit for centuries, and we're done watching and waiting while this invention called whiteness uses and abuses us." He did introduce his role models in activism, his parents. I noticed his mom is white.

Thank you Deborah, thank you BET, thank you Nate Parker, and Debbie Allen for participating in that. Before we get into it, want to say I brought my parents out tonight, I want to thank them for being here, for teaching me to focus on comprehension over career, make sure I learn what the schools were afraid to teach us and my amazing wife for changing my life.

Now, this award, this is not for me, this is for the real organizers all over the country, activist civil rights attorneys, the parents, the teachers, the students who are realizing that a system built to divide and impoverish and destroy us cannot stand if we do. All right? Is kind of basic mathematics, the more we learn about who we are and how we got here, the more we will mobilize. Now, this is also in particular for the black women who have spent their lifetime dedicated to nurturing everyone before themselves, we can and will do better for you. Now, what we've been doing is looking at the data, and we know that the police somehow managed to de-escalate, disarm and not kill white people every day, so what will happen is we are going to have human rights and justice in our own country or we will restructure their function and ours.

Now, -- [applauding] I have more, y'all. Yesterday would have been young Tamir Rice's 14th birthday. So I don't want to hear anymore about how far we have come when paid public servants can pull a drive by on a 12 year old kid playing alone in a park in broad daylight, killing him on television and then go home to make a sandwich. Tell Rekia Boyd how much better it is to live in 2012 than it was in 1712 or 1612. Tell that to Eric Garner, tell that to Sandra Bland, tell that to Dorian Hunt.

Now, the thing is, though, all of us in here getting money, that alone isn't going to stop this. All right? Now, dedicating our lives--dedicating our lives to getting money just to give it right back for someone's brand on our body when we spent centuries praying with brands on our body, now we pray to get paid for brands on our body. There has been no war that we have not fought and died on the frontlines of. No job we haven't done, no tax they haven't levied against us, and we’ve paid all of them, but freedom is somehow always conditional here. You are free, they keep on telling us. But see, she would have been alive if she hadn’t acted so free. Now. Freedom is always coming in the hereafter. But, you know what though, the hereafter is a hustle. We want it now.

And let's get a couple things straight, a little side note, the burden of the brutalized is not to comfort the bystander. That is not our job, stop with all that. If you have a critique for the resistance, our resistance, then you better have an established record of critique of our oppression. If you have no interest--if you have no interest in equal rights for black people, don't make suggestions to those who do. Sit down.

We've been floating this country on credit for centuries, and we're done watching and waiting while this invention called whiteness uses and abuses us, burying black people out of sight out of mind while extracting our culture, our dollars, our entertainment like oil, like black gold, ghettoizing and demeaning our creations and stealing them, gentrifying our genius and trying us on like costumes before discarding our bodies like rinds of strange fruit. The thing is, though, just because where we're magic doesn't mean were not real. Thank you.

Spike Lee presented Samuel L. Jackson with the Lifetime Achievement Award. Lee, believe it or not, was not political but Jackson couldn’t resist. At the end of his thank you speech, he gave a shout-out to Jesse Williams and said he was like a 1960’s activist. “That brother is right and he’s true.” He said, “Make sure you vote and take eight more people with you. We gotta fix this. Don’t get tricked like they did in London.” Ah, yes, a bonus anti-BREXIT mention.

Finally, the singer Usher performed after Jackson’s speech. His way of protesting Donald Trump was to wear a shirt with the words “Don’t Trump America” displayed on the back as he danced.

Isn’t it interesting that these wealthy, privileged black entertainers kept mentioning that things must “be fixed” in an America run by a black president and their choice for change is an old, white lady. By supporting Hillary Clinton, they support Obama’s third term – how does more of the same “fix” anything? 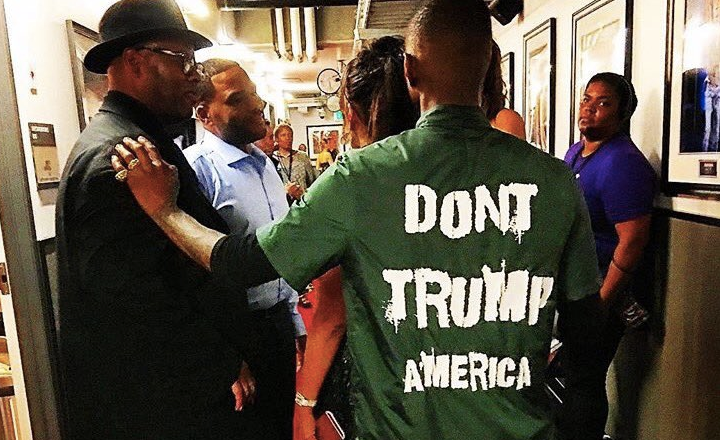