‘Big Bang Theory’ Acknowledges Life in the Womb: ‘There’s a Baby in There!’ 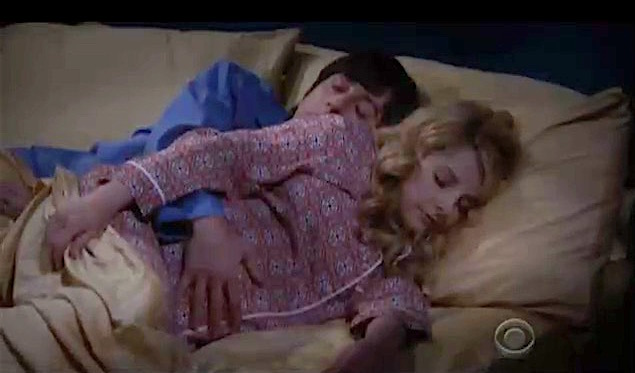 Well, sometimes even Hollywood can get it right in a pro-abortion world. Thursday night’s episode of The Big Bang Theory acknowledges what should be obvious: being pregnant equals a baby.

“The Fetal Kick Catalyst,” opens with Howard (Simon Helberg) and Bernadette (Melissa Rauch) sleeping together. Howard rests his hand on Bernadette’s pregnant stomach and wakes up with great joy as he feels their baby’s kick. “There’s a baby in there,” he finally realizes.

Howard: That's a kick. That's an actual kick.
Bernadette: What are you doing?

Howard: I felt a kick. There's a baby in there.

Bernadette: Oh, yeah, that's where I put it.

Howard: Oh, I mean, I know you're pregnant. I just... Never connected the idea of pregnancy and you actually having a baby.

Bernadette: Which M.I.T. did you go to?

Sad to say this is what happens when a pro-abortion culture has turned a baby into no more than a choice, and abortion into no more than women’s health. When such distancing, euphemistic language is used to sanitize abortion it can be hard to “connect the idea of pregnancy with actually having a baby.” In fact, that’s intentional on the part of abortion activists.

After all, it was only a few months ago when NARAL objected to a Doritos ad that featured an ultrasound because it was “humanizing fetuses.” I can only imagine what they think of one of the biggest comedies in America “humanizing” a fetus by calling it a baby and showing it kick, especially when they’ve spent so much time defending late-term abortion after the last presidential debate. Pro-aborts have been so effective at dehumanizing human fetuses that it’s easy to forget we’re talking about living human beings.

So, hats off to CBS for showing that it’s not simply a fetus, but a person. Let’s hope more networks choose to show pro-life moments as heart-warming (and slightly humorous) as this one.