Yellowstone’s third season went out with a bang. Literally. Someone tried to murder, or successfully murdered, members of the Dutton family in the final episode on Sunday night. A mail bomb arrived and exploded on Beth in her former office. Kayce was attacked by gunfire in his office and someone shot John multiple times as he helped a tourist with a flat tire.

The cliffhanger finale left their survival unknown although John was shown alive after the shooting. The episode, The World is Purple, also set up three different parties who could have been behind the carnage: ruthless land developer Market Equities, tribal chairman Thomas Rainwater or another Native American, or Jamie Dutton. 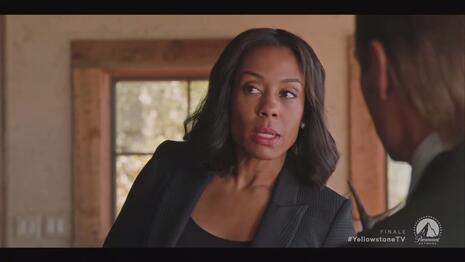 Any of them could have sent the assassins based on the actions and conversations in the finale.

After Beth helps a false harassment accusation against Market Equities CEO Willa Hayes make headlines, Hayes orders Roarke Morris to “start playing dirty.” He says he has been all along, but will do whatever she wants.

Hayes: They are playing a zero sum game, they're doing it with my fucking career. I will not have it.

Morris: Don't feel much like a land deal in Montana, does it?

Hayes: No. It feels like an oil deal in Yemen. And from now on, that's how we treat it. Can you do that?

Morris: I can do whatever you want.

Will the Hollywood trope of big, bad business be behind it all?

It’s not the only prospect. Angela Blue Thunder also encouraged Rainwater and his warrior clan driver Mo to kill John Dutton and “make war for our people.” Rainwater told her he is not a criminal and “will beat them with their own rules,” but could he have changed his mind?

Blue Thunder: You have an opportunity to free that land of him. And it will look like everyone but you who did it.

Rainwater: I'm not a criminal.

Blue Thunder: It's only a crime by their laws. By our laws, which have outlasted an ice age, it is duty. To protect our land and preserve our way of life. It is religion. Or did you buy into their religion when you bought into their laws?

Rainwater: I will beat them with their own rules.

Blue Thunder: They make their rules to be broken ... But if you follow the masters' rules, then you'll kill him, and give us our land back. You travel with a man from a warrior clan, but you do not let him make war. You make him a slave, too. Maybe you've heard enough that you don't ask permission. Maybe you go and make war for our people.

Lastly, Jamie Dutton broke with the family this week by attempting to sell the portion of the ranch Market Equities wants. He’s also been bonding with his biological father — a man who was incarcerated for killing Jamie’s mother. His biological dad encouraged him to “take” the Dutton empire by killing its king and told him he’s a Randall and “killing is our only gift.”

Who will turn out to be the villain? Viewers won’t find out until season four arrives on Paramount next year.