Madonna seems to enjoy showing off her ignorance of Christian beliefs. Last week, the self-proclaimed “Israelite”  singer asserted that Jesus would be pro-abortion. Last night, the “Like A Virgin” singer posted a picture of herself -- wearing nothing but a black lace bra and fishnets -- with a statue of the Virgin Mary on her Instagram. The Virgin covered Madonna’s cleavage. 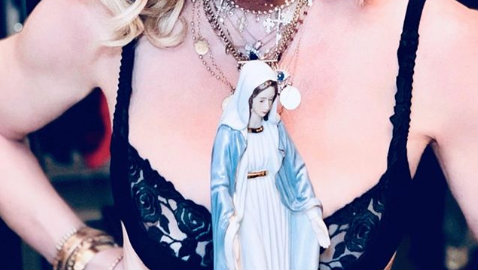 Recently, Madonna has shown a revitalized interest in the Catholic iconography, despite the fact that she denounced her Catholic upbringing. At last year’s Met gala, where she performed “Like A Prayer,” Madonna donned a black veil with a crown of crosses.

A few weeks ago, Madonna released a music video for her song “Dark Ballet” that was filled with Catholic imagery. The video began with a quote from Saint Joan of Arc that read, “One life is all we have and we live it as we believe in living it. But to sacrifice what you are and to live without belief, that is a fate more terrible than dying.” This was contrasted with a quote at the end of the video from rapper Mykki Blanco that read, “I have walked this earth, Black, Queer and HIV postive, but no transgression against me has been as powerful as the hope I hold within.”

The rituals portrayed in the video are almost satanic, depicting a man going insane in a prison cell. There is also a scene where a group of black-cladded women watch a man be burned at the stake.

In her more recent Virgin Mary picture, the irreligious “artist” adorned her neck with an assortment of crosses. Ironically, the Marian statue that Madonna ungracefully showed off was of Our Lady of Grace. The caption for her Madonna x Madonna post said “giving thanks to the blessed Virgin […] #gratitude”

Among the ardent support she received in the comments, Madonna found her fair share of critics.

I’m not Catholic anymoer for all the right reasons but this photo disturbs me. Maybe cause [Madonna] is just trying so hard and coming off as insincere. Glad you lost the dumb eye patch at least.

Indeed, let’s look on the bright side: Madonna wasn’t so sacrilegious to also wear her dumb eye patch.