Aging Diva Madonna, Still Mocking Catholicism: 'I Suffered All the Oppression, All the Abuse'

At 56, Madonna is still trying to sound like Public Sexpot No. 1 and still trying to rattle the cages of her Catholic upbringing – literally, by suggesting the Catholics oppressed and abused her. (This is America, honey. No nuns locked you up.)

Billboard magazine interviewed her about her latest, soon-to-be-forgotten disc, Rebel Heart. “Its tracks are named after her lifelong obsessions, like ‘S.E.X.’ and ‘Holy Water,’ in which she whispers, “Yeezus loves my p---- best.” Billboard confessed it sounded like “Jesus loves my p---- best,” to which she “dryly” remarked, “Whole different context.” Because she’s referring to Kanye West? (He named his last album “Yeezus.”) 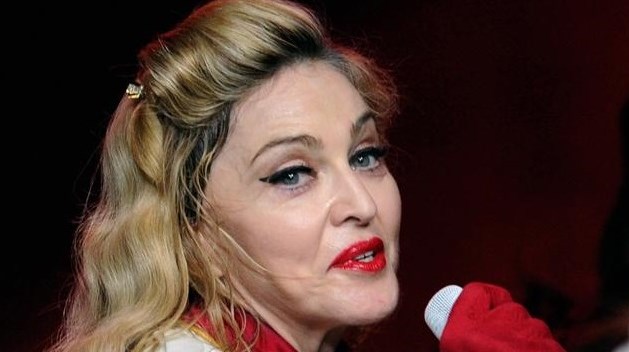 What's your relationship with Catholicism at this point?

Catholicism feels like my alma mater. It's the school I used to go to, and I can go back any time I want and take whatever I want from it because I suffered all the oppression, and all the abuse -- and also enjoyed all the pomp and circumstance, the drama and the confusion and the hypocrisy and the craziness. I feel like I can say whatever I want and do whatever I want. I've been ex-communicated by the Catholic Church a few times. But I also feel like this new pope is kind of groovy, and I think we might be able to get together and have a chat about sex.

As a Catholic and a media junkie, I’d say good luck finding any evidence of Madonna ever being formally excommunicated by the Catholic Church. The usual Catholic position is that apostates like Madonna have excommunicated themselves through their actions – not only on stage, but in other actions like pushing the faddish Jewish Kaballah movement. Any formal action would have been a big news story over the last 30 years.

A Catholic who dearly wants a formal excommunication for her – which in public terms, would be used in part to end any confusion she belongs to the church, when it should be patently obvious she’s not – would note excommunication is rare, even for grotesque sinners like Catholics who run abortion clinics.

Journalists often misunderstand that excommunication is also intended as an act of charity, to tell a Catholic that they need to renounce their deeply sinful ways to be welcomed back into community.

There was this call for Madonna’s excommunication in 2006, which she must have relished for the publicity, when she came to Rome with her tour and was putting herself on a shiny cross. From LifeSiteNews:

“To crucify yourself in the city of the pope and the martyrs is an act of open hostility,” said Cardinal Ersilio Tonini according to the daily La Stampa Wednesday. “It’s a scandal created on purpose by astute merchants to attract publicity.”

The pop-star’s spokeswoman, Liz Rosenberg, claimed in a Thursday e-mail to the Associated Press that “Madonna does not think Jesus would be mad at her, as his teaching of loving thy neighbor and tolerance is Madonna’s message as well.”

PS: In Billboard, there was also this odd sentence about TV sex and violence, and what she "binge watches," since her two children adopted from Africa are only 9: “I watch Game of Thrones with my kids. That's a good family bonding experience.”