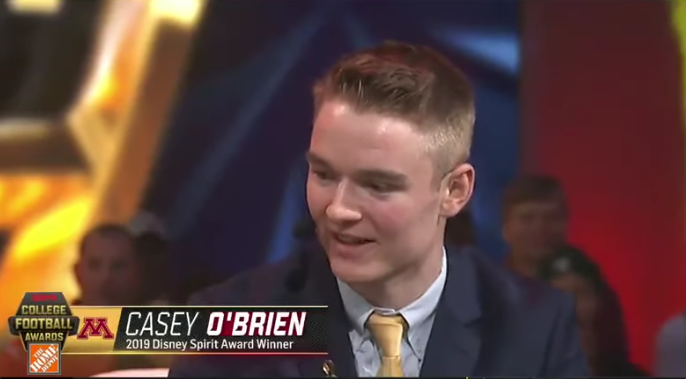 This is a slogan hand-painted on a sign in a redshirt-sophomore’s bedroom; three simple lines that have inspired millions across the country.

Thursday, Casey O’Brien received the “Disney Spirit Award” at the College Football Awards ceremony in Atlanta, aired on ESPN. This award is given annually to college football’s most inspirational figure. The twenty-year-old is a placeholder at the University of Minnesota and a four-time cancer survivor.

At the age of 13, O’Brien was diagnosed with osteosarcoma, a rare form of bone cancer. After its first discovery, doctors removed a softball-sized tumor from his knee.

Two years later, the cancer had moved to his lungs.

Being the fighter that he is, O’Brien overcame that bout with cancer. And, in similar fashion, beat it again his junior year of high school when it returned for a third time.

In 2018, the cancer came back for a fourth time, during his redshirt freshman season at the University of Minnesota. And, in the spirit of another sign sitting above his bedroom door, which reads, “I can, I will, end of story,” O’Brien beat cancer for a fourth time.

As amazing as all of this is, his story does not end there.

This season, O’Brien was able to continue to defy the odds and fulfill his dream of playing college football. He appeared as the placeholder in two of Minnesota’s games.

These two games may seem trivial to some, but for O’Brien, they were miracles. Doctors had told him that he would never play football again, and the University of Minnesota was the only FBS program to medically clear him as a walk-on for the team.

“Honestly, the first thing that I thought of [after playing a snap at the collegiate level] was that I was able to do that for everybody who never got the chance,” he said.

Throughout this fight, O’Brien spent over 300 nights in a children’s hospital, a place he now visits regularly to comfort and inspire other kids fighting their own battles.

Two weeks prior to the award ceremony, O’Brien had announced that a new “small spot” was discovered and removed after a routine screening. Doctors had not cleared him to fly yet following the surgery, so O’Brien and his family made a 16-hour drive to receive the award.

He was welcomed with over 40 seconds of standing ovations both before and after his remarks.

When asked about his current health status during the ceremony, O’Brien said, “They don’t see anything else in there, so just keep on rowing with three-month scans and be back for the bowl game.”

O’Brien continues to train and prepare for Minnesota’s game against Auburn in the Outback Bowl on New Year’s Day. He hopes to continue inspiring and providing perspective for his teammates, coaches, and fans around the world as the rest of his story unfolds.

Full video of his award ceremony found below.