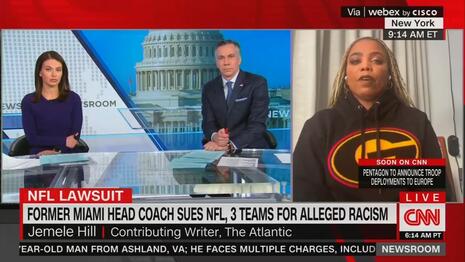 Flores was fired after three seasons with the Dolphins, and while he did not make the playoffs in those three years, he had his team on the right track to be a legitimate contender for the long term. According to Flores’ lawsuit, the biggest reason why he was fired was that the NFL is as racist as the day is long:

The NFL remains rife with racism, particularly when it comes to the hiring and retention of Black Head Coaches, Coordinators and General Managers. Over the years, the NFL and its 32-member organizations (the “Teams”) have been given every chance to do the right thing. Rules have been implemented, promises made — but nothing has changed. In fact, the racial discrimination has only been made worse by the NFL’s disingenuous commitment to social equity.

Even though most of his lawsuit is a load of nonsense, The Atlantic reporter and veteran sports mau-mauer Jemele Hill thinks that there is a similarity between how Flores and former San Francisco quarterback Colin Kaepernick were treated:

“This is a reckoning that is long overdue in the NFL. And I think it is important that people draw the link between how CK was ousted from the NFL for protesting against the issues, among them systemic racism, that is very prevalent in the NFL.”

How many more times do we have to have to listen to this overused and baseless criticism of the NFL?

If the NFL were systemically racist, Mike Tomlin would not have been coaching the Pittsburg Steelers for 15 years, seventy percent of the league’s players would not be black, and Flores and Kaepernick would never have gotten jobs in the first place. And people really need to move on from thinking that Kaepernick was cut and then never given a chance to play in the NFL again because owners were good-for-nothing racists. Kaepernick walked away from a contract extension and most teams didn't think his mediocre (and declining) play made up for the locker room and fan relations poison that came with him.

Hill and most other people still do not seem to accept there's the possibility of a logical explanation and would rather peddle a narrative that increases the problem they want to solve. Hopefully, the courts and the lawsuit will reveal the truth about what happened in the Flores’ situation and we can discard the “racism” nonsense.