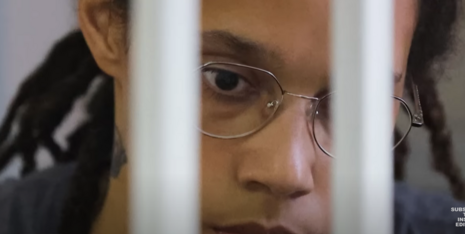 A liberal Baylor University professor is demanding that Christians stop hating homosexuals and that the Baptist school should lead the charge of protest against Russia’s imprisonment of lesbian basketball player Brittney Griner.

Greg Garrett, the Carole McDaniel Hanks Professor of Literature and Culture at Baylor, wrote on Baptist News Global that “we don’t talk about Brittney” and “We should.” The Baptist university in Texas should be yelling the loudest on her “wrongful imprisonment,” but that’s not happening, he groaned.

Griner is the 6-foot-9-inch center who led Baylor to a national championship in 2012 while keeping her lesbian sexuality to herself. She came out of the closet upon getting drafted by the WNBA’s Phoenix Mercury. Last February, she was arrested in Moscow for attempting to take cannabis onto a plane flight. Griner was convicted of a drug smuggling crime in Russian court, and very recently, she was transported to a penal colony/labor camp to begin a nine-year sentence.

Professor Garrett is using this story to condemn Christians and Baylor University for not loudly protesting the imprisonment of a lesbian. He believes Christians are apathetic to Griner’s plight because she is lesbian and has protested the American flag.:

"It feels like a failure to me and I don't want to indict any single person, but it's there from the regents all the way down except for Baylor's current head coach. It seems nobody seems to be speaking out for her and that disturbs me."

The university released a statement saying: “Brittney Griner is and always will be a member of the Baylor Family. We remain deeply concerned for her health, safety and well-being. Throughout her detainment, high-ranking Baylor officials have been in contact with those close to Brittney, as well as with appropriate elected and government officials. In addition, on several occasions Baylor has expressed public support for Brittney on social media."

Garrett wrote, “We need to reach out and do everything we can to get her back home. We have to support her and stand up for her and let her know that she is not alone and she is not forgotten."

In shilling for the LGBT movement, Garrett demanded that Christians set aside scripture on unnatural relations and celebrate unrepentant sin. They need to read the Bible differently, too. Apparently, LGBT folks should receive a free pass on biblical sin. Especially Brittney.

Garrett also claims some Christians believe Griner got what she deserved for breaking Russian law, and says she represents “that family member we don’t talk about.”

The hateful attitudes of evangelicals toward homosexuals are a great impairment to spreading the Gospel, says the liberal professor who says forget about the Gospel. Baylor’s allegiance to biblical teaching is harming Baylor’s closeted LGBTQ faculty, staff and students, Garrett insists.

Garrett neglected to mention in his LGBT puff piece that Griner has previously accused the United States of systemic racism, called for the national anthem not to be played before WNBA games, and this far-Left basketball league is extremely unpopular with mainstream America.