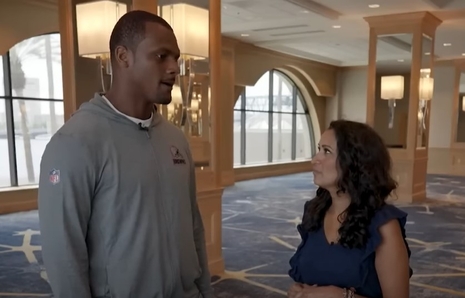 During a pregame interview in Jacksonville Friday, the Cleveland Browns notorious new quarterback gave an apology that fell far short of taking responsibility for his pathetic behavior. He’s been accused by 30 message therapists of engaging in sexual misconduct with them, was allowed to play in an exhibition game at Jacksonville and will serve a suspension of six games or more. Here’s the pull-out quote from his interview with ESPN’s Aditi Kinkhabwala:

“Look, I want to say that I’m truly sorry to all of the women that I have impacted in this situation. The decisions that I made in my life that put me in this position I would definitely like to have back, but I want to continue to move forward and grow and learn and show that I am a true person of character and I am going to keep pushing forward.”

If you noticed this statement was short on the details of his aberrant behavior, you weren’t the only one.

On ESPN’s First Take TV program before the game, Emily Kaplan blasted the Browns and their $230 million quarterback.:

“I feel like the Browns are living in denial because they’re living in their own world right now because of this contract that they gave him with all these millions of dollars of guarantees because they live in this bubble in Ohio where Deshaun Watson gets on the field at training camp, the fans are cheering for him and asking him for autographs.”

Then came the game in Jacksonville. Watson probably regrets saying before the game he was excited to get back on the playing field. He was dreadful, completing one of five pass attempts for all of seven yards. The treatment he got from Jaguars’ fans was even more brutal than his performance.

Jacksonville fans booed the heck out of Watson. They cheered his incomplete passes and chanted, “No means no.” That was the tame stuff.

A retired judge, Sue Robinson, recently gave Watson a six-game suspension. Watson said he deserves an 8-game suspension, but the NFL is seeking a suspension that would sideline him for the entire 2022 season.