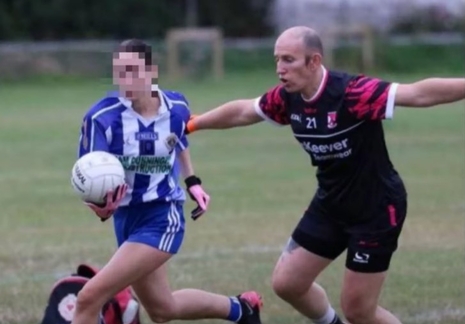 A transgender man who helped an Irish women’s rugby club win a championship by an embarrassing margin says he did it for the sisterhood. With the male Giulia Valentino upsetting the competitive balance of the sport, the LGBT Gaelic football team Na Gaeil Aeracha destroyed the competition in the recent Dublin Junior J Shield football final.

And get this: Twitter suspended a number of women’s rights accounts that posted Valentino’s picture to point out the unfairness!

Breitbart reported that “Outrage has hit the Irish sporting world after a women’s ‘LGBT’ football team with a trans player beat their finals opponent by eight goals.” That’s a devastating victory margin in this sport.

Na Gaeil Aeracha changed the setting for each of its social media accounts to private after it smashed the opposing team in the finals, then refused to address the controversy that followed. This team allows any person to train and play based on their gender identity, and it does not require medical transitioning. (Guys only need to be psychologically confused about their gender).

Valentino is an Italian who moved to Dublin, Ireland in 2019 for the opportunity to capitalize on Na Gaeil Aeracha’s exploitation of gender identity. He says he joined the Irish LGBT team “because of sisterhood, validation and political visibility; as a trans woman those things are very important to me.”

Like LeBron James, Valentino is more than an athlete. He’s also a fetish club performer entertaining folks as the “trans dyke” DJ Mav.

Also, Valentino was annoyed while playing for another team that told him to use a separate locker room, which he labeled as a “harsh approach.” Yeah, biology and male chromosomes are harsh and inconvenient facts.

Prior to the final game, Na Fianna’s manager met with the referee to challenge Valentino’s eligibility to play in the women’s game. The referee would eventually halt play to tell his team there was “a problem with your number 21” because he’s a man and “this is the Ladies’ Gaelic football association.” Na Fianna would also have a chance to appeal the results of the game because of the trans player controversy.

The entire sport is not virtue signaling like the Irish league is though. World Rugby does not allow trans men to play on elite women’s rugby teams, and its website states:

“Transgender women may not currently play women’s rugby. Why? Because of the size, force- and power-producing advantages conferred by testosterone during puberty and adolescence, and the resultant player welfare risks this creates.”

“Research contradicts this, consistently showing that total mass, muscle mass and/or strength are reduced by at most 5 per cent to 10 per cent when testosterone is suppressed to levels in the female range, for a period of 12 months.

“The consequence is that given the size of the biological differences prior to testosterone suppression, this comparatively small effect of testosterone reduction allows substantial and meaningful differences to remain.”

A sportswriter named Ewan MacKenna wrote that it was “absurd and actually dangerous” for a biological male adult to be playing rugby against teenage girls. Valentino has stated he’s been an athlete for more than 30 years, and he quit men’s sports because he was “uncomfortable with the male environment.”

Those teeny bopper girls he mashed in the championship game can now say they feel uncomfortable with the formerly female sports environment because of its new, beefy climate.