Vaccines Not Required For Illegals, But Tennis Great Barred From U.S. Open 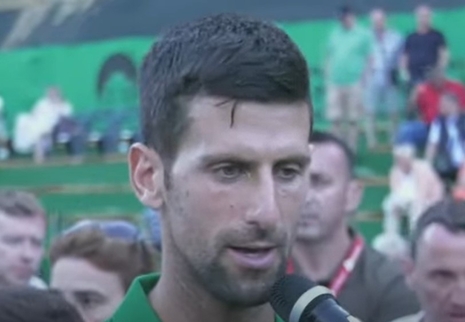 The Biden Administration’s COVID travel restriction policy preventing unvaccinated foreigners from entering the United States is so darn selective it smells to high heaven. Immigration officials are allowing unvaccinated illegal aliens to cross our border, but the greatest active tennis player in the world -- Serbia’s unvaccinated Novak Djokovic -- is barred from our country.

Djokovic is fresh off his seventh – and fourth straight -- Wimbledon title. Due to the Biden Administration’s ridiculous ban on unvaccinated people entering the country, he will not be allowed to enter the U.S., let alone play in next month’s U.S. Open in Flushing Meadows, N.Y. He says he is a proponent for the freedom to choose one’s health options.

Thousands of people who want to see Djokovic play in the U.S. Open are rallying in his support. A Change.org petition has gathered 17,500 signatures, in hopes of generating 25,000. The petition reads:

Novak SHOULD be allowed to play. The vaccine is NOT an extra line of defense. Natural immunity is stronger. LET NOVAK PLAY! …

There is absolutely no reason at this stage of the pandemic to not allow Djokovic to play at the US Open 2022. US Government and USTA must work together to allow him to play. If unvaccinated American players can play, Djokovic as one of the legends of the game, must be allowed to play. MAKE IT HAPPEN, USTA! John McEnroe, please use your powers to make this happen!

A Fears over unvaccinated people being super-spreaders have proven to be unfounded. As the Washington Examiner reported last winter, “Fully vaccinated adults are testing positive for COVID-19 at about the same rate as unvaccinated people, regardless of how many booster shots they’ve gotten. And while the vaccines may prevent transmission marginally, insofar as they might help reduce the number of days a person is contagious, there is little evidence that they are doing anything at all to prevent the spread of the omicron variant, which is far more contagious, but thankfully much less severe than the original COVID-19 strain.”

Furthermore, a professional cyclist from Luxembourg, Bob Jungels, won the ninth stage of the Tour de France earlier this month. A medical test revealed he had a low grade of COVID, but not enough to infect others. Neither the U.S. nor professional tennis are employing the same testing methods. One size fits all: you’re not vaccinated, you’re not getting in and you’re certainly not playing tennis here.

A report confirmed, “100% of noncitizens’ are tested for COVID-19 ‘at some point during their immigration journey.’ " But they aren't required to be vaccinated.

Djokovic was healthy enough to win this year’s Wimbledon title, and there’s no indication he’s suffering from COVID or any other illness. He was also prevented from playing in the Australian Open this year, due to his vaccination status.

In addition to the COVID-related inconsistencies of U.S. policy on foreigners entering the country, there is also the slogan we hear all the time with regard to abortion: “My body, my choice.” They’re selectively not applying this to the vaccination controversy.

The lesson here is that Djokovic would have a better chance of playing in the U.S. Open if he walked across the border in Yuma, Arizona as an illegal alien. Sad but true.