At NFL & ESPN2, It’s Easier To Apologize For Coarse Entertainment After The Fact 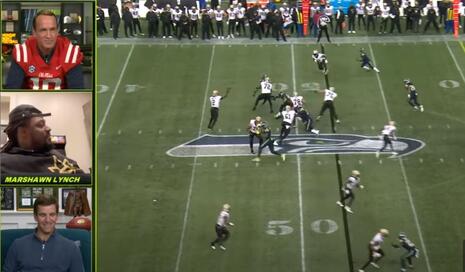 The New Orleans Saints were playing the Seattle Seahawks when Lynch visited the ESPN2 television booth. Seattle quarterback Geno Smith mishandled a snap from center, prompting Lynch to blurt out, “Oh, what the f—k, I mean.” The Mannings also laughed it up discussing how much liquor the former player known as “Beastmode” had consumed that day to “warm up.”

The New York Post has twice reported on the incident since it happened. Joseph Staszewski wrote it was inevitable: “The colorful former Seahawks running back let one slip during Peyton and Eli Manning’s alternate ‘Monday Night Football’ broadcast of the Seattle Seahawks versus the New Orleans Saints on ESPN2.”

A few days later, the NYP’s Phil Mushnick added his commentary, writing ”there was an apology from the ESPN Manning Brothers for inviting and indulging the steady mumble of profanities that casually spilled from guest star Marshawn Lynch during their ‘alternative’ ‘Monday Night Football’ show.”

It wasn’t going to be Eli offering the apology. Last month, he was caught giving Philadelphia Eagles’ fans the Italian salute. A good role model for children, he’s not, either.

Mushnick is a frequent critic of the NFL and its sleazy Super Bowl halftime programs featuring gangsta rappers unloading n-words, women-abusing and cop-hating trash on audiences. In 2020, there was also J-Lo’s and Shakira’s pole dancing and sex stimulation. Lynch’s foul mouth during a primetime NFL broadcast just gave Mushnick further ammunition in his crusade for decency.:

“Lynch clearly didn’t care that he was on live national TV. He was being true to his classless character — the one that brought him fame, acclaim, honors and emulation for grabbing his crotch as he scored touchdowns.

“ESPN didn’t warn them away from Lynch? Stupid question. ESPN selectively covets such attention. The Mannings had no idea? Grown men, they could have stopped Lynch with his first crudity, but they didn’t. They waited until Lynch was done and gone.”

Once again, Mushnick complained that our culture must invoke the tiresome questions: why are we here again? where are we headed and what’s the upside of this steady stream of trashy fare? “Why must we always be headed down, even while our sports and their TV networks continue campaigns imploring us to treat one another with greater respect and dignity, especially as they relate to race?” These are great points that the shameless NFL needs to answer.

It’s further evidence of why guests like Lynch and others find their way onto the NFL's mega stage, coarsening the culture with each controversial appearance.