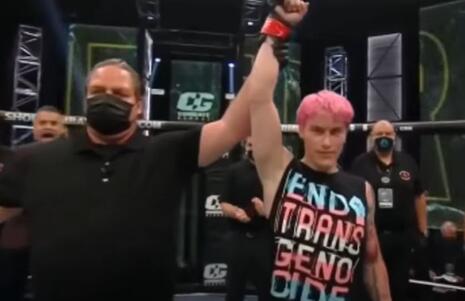 Alana McLaughlin choked out Celine Provost in the second round of a Friday MMA match in Miami. On the surface, it sounds like a ho-hum competition between two no-name women. Not so. Alana is a man pretending to be a woman and has the muscular physique to prove it.

Most female MMA fighters refused to fight McLaughlin, but Provost took a loss for the LGBT crowd. Provost landed a few punches, but could not physically match the man in the octagon.

McLaughlin, who goes by the nickname “Lady Feral,” was a sprinter at Newberry College before he joined the military in 2003. He served in the Army Special Forces unit for seven years. In 2016, he had anatomy surgery and has since claimed to be a woman. He's 38 now and a formidable foe for any woman willing to challenge him.

This is the second time the MMA has foolishly allowed males to intrude on the women’s competition. Fallon Fox was the first male interloper and he whipped Elisha Helsper in 2012.

These tainted victories are easy pickin’s for men, and McLaughlin is hoping to cash in at the expense of more female victims. The late actor Andy Kaufman, who beat up women in a wrestling ring, would be so pleased. After beating a girl, McLaughlin shamelessly crowed over his victory:

“I want to pick up the mantle that Fallon put down. Right now, I’m following in Fallon’s footsteps. I’m just another step along the way and it’s my great hope that there are more to follow behind me.”

It’s really for the children, too, McLaughlin says:

Who’s responsible for this gross mismatch? It’s not Dana White and his UFC. It’s on the Florida State Boxing Commission, which approved McLaughlin because he had lowered his testosterone level. He has not, however, figured out a way to transform his XY male chromosomes to the female XX chromosomes.

Until a boxing panel in Florida succumbed to gender madness, McLaughlin said it had been a “nightmare” trying to find a woman willing to face the substantial disadvantage of taking him on. “I have nothing but respect for (Provost),” who must have needed a paycheck pretty badly.

Not only did Provost face an uneven canvass in the match-up, she’s also recovering from an August COVID-19 infection. Talk about a patsy!

Before and after the fight fraud, McLaughlin had the gall to wear a t-shirt stating, “End Trans genocide.”

Nonetheless, the LGBTQ Left will view this pathetic episode in gender bending as a significant milestone.