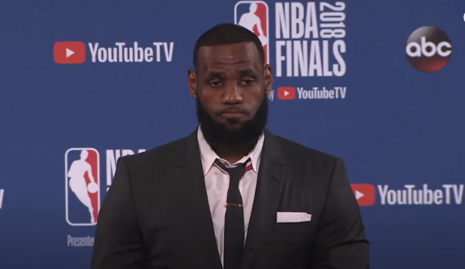 James had originally fired his threatening tweet posting the photo of Columbus police officer Nicholas Reardon for having fatally shot Ma'Khia Bryant alongside the caption "YOU'RE NEXT #ACCOUNTABILITY," James was promptly called out for having potentially inciting violence to his 49.6 million Twitter followers.

Senator Tom Cotton (R-AR) tweeted: "Lebron James is inciting violence against an Ohio police officer. This disgraceful and dangerous. Is the NBA okay with this? Is Twitter?"

On Fox News Primetime, Senator Ted Cruz (R-TX) called James’ tweet a "grossly irresponsible message for LeBron James to send out. In this instance, 'you're next' could certainly be interpreted by some, even, as a call for violence," Cruz said.

After deleting his original hot take, James admitted he let anger get the best of him before looking at the facts of the Ohio incident.

"ANGER (doesn't do) any of us any good and that includes myself! Gathering all the facts and educating does though! My anger still is here for what happened that lil girl. My sympathy for her family and may justice prevail!” James wrote.

Then the Lakers basketball star and social justice warrior renewed his attack on police, whom he accused last year of hunting down African Americans. He claimed the attacks on his tweet actually create more racism:

I’m so damn tired of seeing Black people killed by police. I took the tweet down because its being used to create more hate -This isn’t about one officer. it’s about the entire system and they always use our words to create more racism. I am so desperate for more ACCOUNTABILITY

ANGER does any of us any good and that includes myself! Gathering all the facts and educating does though! My anger still is here for what happened that lil girl. My sympathy for her family and may justice prevail! 🙏🏾✊🏾🤎👑

He could have easily said he was so damn tired of black people being saved by police as Bryant was a split second away from stabbing another black girl when Reardon fired.

But that's not a route James would ever take. Incendiary, unfounded race hysterics are becoming the norm for James. Last August, he said in a post-game interview following the Jacob Blake shootings, "For Black people right now, we think you’re hunting us.” He tweeted, "We’re literally hunted EVERYDAY/EVERYTIME we step foot outside the comfort of our homes!"

On Thursday's Fox News @ Night, Outkick’s Clay Travis said that James is an “idiot” who needs to apologize to every cop in America for his remarks.